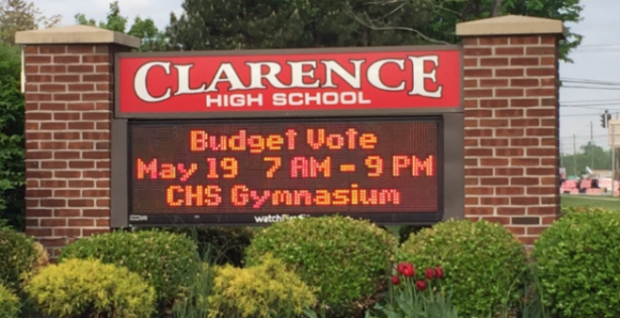 There’s a light at the end of the tunnel as nervous parents, kids, and teachers cross their fingers and hope that school budgets are passed and that good people are elected to school boards throughout western New York’s rural and suburban districts.

Today is Tuesday, and the polls are open.

In my own town of Clarence, a dedicated and selfless group of parents have banded together since the bleakness of 2012 and formed a reasonable well-oiled campaign machine that we hope delivers us victory tonight. I don’t know what it is about Clarence that makes it so susceptible to last-throe gurgles from the tea party, but alas, here we are again. In my town we have four candidates for two open school board seats, and I always harken back to the blissful time before I had to pay attention, and recall that I always voted in favor of the school budget, but seldom knew whom to select for the board. This year, it was even more important because the differences between the pro-school and anti-school candidates is so stark.

Our group endorses and supports Michael Fuchs and Dennis Priore. Michael Fuchs is an incumbent and has served the district and its students and faculty well. He is against unsustainable cuts to educational opportunity for our kids, and wants to restore the district to its former excellence. He has worked for Rich Products for well over a decade, handling the finances of a huge local corporation. He has the skills, education, experience, and integrity to continue serving us well for the next 3 years. Dennis Priore is a longtime resident of Clarence and a former principal and school administrator. As a recent retiree, he has time, knowledge, experience, education, and skills to marshal in order to serve our district. He knows how budgets and union negotiations are made, and he has pledged to balance the needs of the students with the expectations of taxpayers.  They’re also the only candidates running for school board who are homeowners and school taxpayers. With a stake in the district and an investment in the community, they won’t let the students be further harmed by financial shenanigans or disastrous tea party austerity.

But if that wasn’t enough, take a look at one of their opponent’s closing argument. (The other opponent is fundamentally unelectable). It perfectly distills all of the reasons why he is an unacceptable and noxious candidate for a school board. Uneducated, inexperienced, with absolutely no credentials or resume, this person is all bluster and no substance. Here are your CTA Endorsed Candidates for this election. The teachers union likes to say that they are “supporting our students” or “fighting for the children”. It’s just as absurd to say the Iron Workers fight for steel, the UAW fights for cars and the Operating Engineers fight for heavy equipment. The unions exist solely for the benefit of their members and their own interest. The school board exists to represent the people of this town. The CTA does not need representation on the school board. They have things like the Triborough Amendment in place to stack the deck against students and taxpayers. If you think that the endorsement of these candidates by the CTA shows that these candidates put students and taxpayers first, you are sadly mistaken.

It takes a special brand of malevolent cynicism to conclude that the teachers are full of shit when they say they’re fighting for the children whom they teach. It takes an even more special type of ignorant, noxious attitude to assume that teachers are just in it for greed — the same attitude as the Buffalo News’ editorial page or its union-member, married-to-a-teacher resident hypocrite columnist Donn “throw you under the bus” Esmonde.

Here’s the thing that Joe Lombardo doesn’t understand — mostly because he evidently never so much as received an associate’s degree after high school (his resume is a closely guarded secret he won’t reveal) — teachers didn’t attend 4 years of college and then an additional few years of postgraduate study to obtain their M.S. and teaching certificate in order to get rich.

If they wanted to get rich, they could have gotten an MBA and traded commodities, or become entrepreneurs. Instead, they joined a noble profession for which Joe Lombardo has no respect.

Some 20-something punk kid who lives with mommy and daddy decides he doesn’t like unions or teachers, (or teachers’ unions), so he just accuses them all of being greedy pigs at the public trough, driving around in their Bentleys on their $60,000 median salaries, right? They couldn’t possibly be in it for the love of teaching or the thrill of educating and molding young minds, because that sort of notion is not one that Lombardo has any concept of.

A teacher is proud of the work that he or she does — educating the next generation of Americans. Educating the kids who will heal Joe Lombardo when he’s sick; who will represent him in court; who will manage or create the company he patronizes; who will entertain him on stage or screen; who will score a touchdown or hit a home run. You denigrate teachers, you denigrate the very foundation of our society.

The veracity of unions in our schools is really taking its toll on student opportunities and taxpayer’s wallets.

That is not a sentence that has any reasonable meaning in the English language. Which taxpayer’s wallet? “Veracity” means truthfulness.

It’s such a blatant and rampant problem that even polar opposites such as Governor Cuomo and myself, recognize what’s going on. http://www.nydailynews.com/…/andrew-cuomo-rips-teacher-unio… Don’t be mislead by two candidates and a group of people who have established that they stand with an industry that collects $220 million annually to perpetuate and expand a gluttonous and overly generous contract in the name of education.

Here’s the question they’ll never, ever answer: How much do you think is a fair salary for a teacher? What do you think are fair benefits for a teacher? How would you — as a school board member — make changes to the state laws governing teacher pensions? How would you work around the Triborough Amendment and beat the teachers into submitting to your austerity wage cuts and slashing of benefits?

85% of Clarence teachers are ranked as “highly effective” by the state.  On what insane lunatic planet does someone institute punitive wage and salary cuts against a workforce that regularly exceeds expectations? Shall we have an army of the worst teachers who can’t get a job anywhere else come and educate our kids for $10/hour and no benefits?

It’s been shown time in and time out, that they put themselves ahead of everyone else, while sacrificing opportunities for students.

I’ll say it this way: Joe Lombardo must not have ever talked to a teacher and actually asked them what their job entails. He assumes they show up at 8, leave at 3, take summers off on the Cote d’Azure, and spend the rest of their time making sure their BMWs gleam in the sunlight. I’ll say it this way, too: Joe Lombardo doesn’t know what the fuck he’s talking about.

School districts have lost all bargaining power because entrenched politicians are paid off to write laws where the union will always come out the winner.

And as a school board member in a small suburban district, you’ll do what about that, precisely? Start a coup?

As a taxpayer, a resident, a parent or a student, you only have two choices in this election tomorrow.

I don’t know how much more a ragtag grassroots team of fed-up parents can do to mobilize for a school vote, and we’ve done everything we can think of. We can only hope our district gets out of this unscathed, and that similarly situated districts have equally positive outcomes.