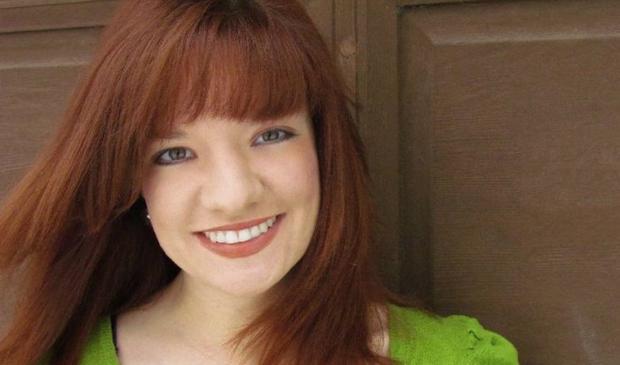 Where did Maria Droz come from? Sometimes it seems as if she landed from another planet or emerged from a magic lamp, ready to regale earthlings and mere mortals with the antics and inventions that come from her bottomless bag of tricks and seemingly limitless talent. At the moment, she is careening about the New Phoenix Theatre on the Park as magical Puck in Kelli Bocock-Natale’s inventive production of Shakespeare’s A Midsummer Night’s Dream —a role that nobody is surprised to hear she’s playing.

Her favorite roles include Trixie, the pre-lingual infant heroine of Knuffle Bunny ,and Mayzie, the overdressed bird in Seussical, both at Theatre of Youth. She was Peter Pan at the Lockport Palace, and Mrs. T in Avenue Q at Muscialfare—puppet voices are a particular specialty of Miss Droz. At BUA she was the privileged daughter of a Hollywood star (played by Jimmy Janowski in Lana Turner drag) in L’Imitation of Life, and slayed audiences every night with her inimitable reading of a line as simple as “public scheewel.” She was also the oversexed male juvenile passenger voted “Most in Need of Being Killed Off” in BUA’s Poseidon! An Upside Down Musical, creating hilarity out of air, or water, or land. She has a sense of the funny that is simply uncanny.

Droz studied theater at Buffalo State College, but it is hard to imagine anybody teaching her the sort of zaniness that seems to come so naturally to her. As Puck, she darts across the expanse of the theater like laser light, all laughter and mischief. Here, the incomparable Maria Droz submits to The Public Questionnaire.

What word would your friends use to describe you?
I’ve been called ” elfin” and ” eccentric,” but my most favorite description was told by actor Jacob Abarella: “You are like everyone’s embarrassing aunt.”

What quality in your current character is most unlike your own personality?
Puck loves to speak in iambic pentameter.

What quality in your current character is most like your own personality?
Puck is extremely mischievous. I like to think that I know how to stir a good pot once and a while.

When and where were you the happiest?
In 2013 I took a trip to Turks and Caicos, an all-inclusive island resort. Unlimited fresh papaya, the white sand on my toes, and the best part: You could swim to the bar!

What is your idea of hell on earth?
The five seconds right before you head on stage. You get acid pouring up your throat, you feel like you just peed a little bit, and you’re not sure if you let out a nerve fart. But when right after you go on and your adrenaline is pumping, that is pure heaven.

What is your greatest fear?
Having bad breath or a lingering odor and someone not having the courage to tell me. Honesty is the best policy.

Which talent do you most wish you had?
I wish I could somersault.

What superpower do you most wish you had?
To make money appear out of thin air.

What would you change about your appearance?
I started to get acne when I was 12. I thought it would go away by the time I reached adulthood, however it only got worse. I would love to be able to go out somewhere without wearing a ton of cake makeup to cover up the monstrosities!

What trait do you most despise in others?
Big egos.

What trait to you most despise in yourself?
I spread myself too thin. I try to always do things with the best intentions until I realize I went in way over my head.

What do you most value in your friends?
The ability to laugh so hard together that your stomach hurts, and cry until we laugh. I love that my close friends and I are like family. We’d do anything for each other, no questions asked.

What do you consider to be your greatest accomplishment?
Meeting my partner in crime, Adam Kreutinger. We met in a backyard at an eighth-grade graduation party. I thought he was strange because he had facial hair. He called me every day that summer. I never called him back. But once I found out he was talking to another girl I said, “Absolutely not!” We’ve been together for 12 years. Please don’t ask us when we are getting married. If it ain’t broke, don’t fix it.

What is your guilty pleasure?
I dress up like an old lady. Her name is Linda. I have been to the Broadway Market, out to dinner, the Buffalo Zoo, etc. and no one has any idea that I’m 20-something in a wig and a sequined blazer.

What character from fiction do you identify with most?
Amelia Bedelia. She can’t get it together, but she can cook like no one’s business.

What person from history do you identify with most?
Lucille Ball mixed with Mink Stole.

What do you consider to be the most overrated virtue?
Simplicity. I am a sucker for “stuff.” Thrift shopping and yard sales all the way!

On what occasion do you lie?
I like to exaggerate…

What was the subject of your last Google search?
D4NNY. Google it. I dare you.

If you come back in another life, what person or thing would you like to be?
A contestant on Stairway to Stardom.

What is your most prized possession?
My oldest dog, Paige. She is a 12-year-old puppy mill rescue. She is a nervous mess 24/7. She has been through hell and back and trusts one person. And that’s me. For that she is my angel. The day after I adopted her, my grandfather, who was my hero, passed away. I really feel like this little creature was a gift from him. She’s an old gal but every day with her is a treasure, and when she does pass away I’m glad that every day since I had with her is incredibly special.

What role, in which you will never be cast, is actually perfect for you?
It would be a dream to play Shelia in Hair. I know I’m more of a Hud, but gosh I’d love to belt out “Easy to Be Hard.” That’s my anthem.

What is your motto?
You get what you give. Do the right thing and be a good person.