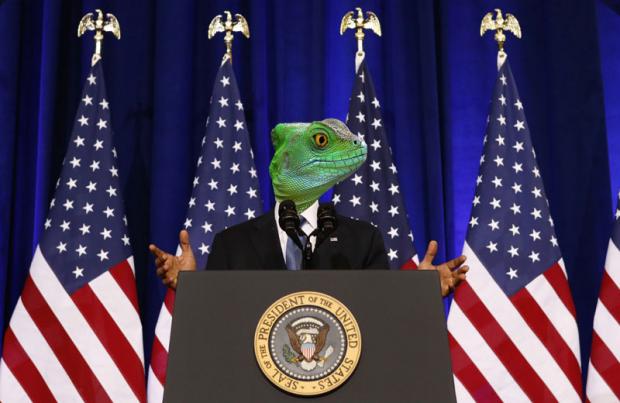 “On its world, the people are people. The leaders are lizards. The people hate the lizards and the lizards rule the people.”
“Odd,” said Arthur, “I thought you said it was a democracy.”
“I did,” said Ford. “It is.”
“So,” said Arthur, hoping he wasn’t sounding ridiculously obtuse, “why don’t people get rid of the lizards?”
“It honestly doesn’t occur to them,” said Ford. “They’ve all got the vote, so they all pretty much assume that the government they’ve voted in more or less approximates to the government they want.”
“You mean they actually vote for the lizards?”
“Oh yes,” said Ford with a shrug, “of course.”
“But,” said Arthur, going for the big one again, “why?”
“Because if they didn’t vote for a lizard,” said Ford, “the wrong lizard might get in. Got any gin?”

― Douglas Adams, So Long, and Thanks for All the Fish

I’ve always wondered at the ability of liberals to defend Democratic presidents who aren’t really very liberal, or at least very leftist. All that needs to happen is that conservatives attack him and those of us who should be criticizing our president, in an informed and ideologically grounded way, instinctively rush to his defense against the old enemy. It seems that the wilder and more baseless the right wing attacks are, the more liberals will bend over backwards to give Obama the benefit of the doubt on issues that should mean something to us. It’s not his fault, they say, that the system is corrupt. Well, of course not. It’s mostly the Supreme Court’s fault. But settling for a possibly-somewhat-less-corrupt party just because the other guys suck even worse is the way we’ve been ratcheting expectations down for decades.

Obama’s been quietly working to pass the Trans-Pacific Partnership (TPP), yet another free trade deal, which even oblivious American workers seem to have figured out is not the best thing for them by now. True to their reputation as slightly better than the worst, Senate Democrats have offered nominal resistance. That’s what Democrats do now: Pretend to care for a minute, so their constituents can notice, then “cave in” and do what their funders wanted in the first place. Then we all lament their “spinelessness” instead of recognizing them for the dive artists they really are.

Is there anyone who really doubts the TPP will pass? It certainly won’t be for lack of Republican support: Mitch McConnell, GOP Senate Majority leader and Obama’s supposed arch-nemesis, said on ABC’s This Week last Sunday that the President “has done an excellent job” pushing the trade deal, and it was Republican support in the Senate that has moved to “fast track” the bill to an eventual vote, which means no amendments, no changes, just vote. In the House, Mitt Romney’s VP choice Paul Ryan promises “we will have the votes.” I don’t doubt at all that he’s correct. In the end, some of those votes will be Democrats, but just enough; most will be able to preserve the image of opposition yet again.

It won’t matter that the TPP moves judicial authority in trade disputes out of courts and into corporate arbitration. It won’t matter that even Op-Ed lapdogs have to admit that “it’s undeniable that American manufacturing workers have suffered terrible job losses” as a result of free trade agreements, before launching into largely incoherent attacks on opponents. The money wants the TPP, and in the face of that, what the people want—or would want, if they were informed by a largely silent press—is irrelevant.

This is how money perverts politics. Our universally loathed cash-orgy of an election process provides ample opportunity to bribe and indeed buy politicians—whose first and often only job is to gladhand and fundraise. Things were bad enough before Citizens United, but the environment we’ve created today has made it ever easier to manipulate the process. It may indeed be possible at this point for one or two people to spend enough money to hand-pick a candidate, vet him, get them nominated and then elected. We’ll see soon enough, because the infamous Koch brothers—fossil fuel billionaires, libertarian ideologues and generous GOP donors—have decided to start throwing their weight around in the primary season, rather than waiting to see who wins the Republican nomination before donating.

It’s a potential game-changer. Until now, I’ve been saying that GOP primary season is fun and kooky but that the ‘moderate’ establishment candidate always takes the nomination. Think Bush, Dole, McCain. Usually the really big money waits until all that shakes out. But the Koch brothers are not simply billionaires looking for someone to bribe for an easier path to profit. They are bona fide libertarian idealists looking to shrink and possibly replace the government. Milquetoast Republicans like Mitt Romney are not good enough for these guys. Romney wasn’t about to eliminate the income tax or end emissions regulations. So now the Kochs are getting into the primaries, and since the whole thing is more of a fundraising competition than an exercise in democracy, this time we really could end up with a Tea Party dipshit taking the nomination. This is both good and bad: good in the sense that it almost ensures another Democrat in the White House, because as much money as they spend, the Kochs’ ideals are shared by maybe 20% of the populace; but bad in the sense that it will further legitimize this idiotic, backwards, and willfully ignorant ideology and its baseless economic fantasies. And the more money they throw in, the more the Democrats will need to counter them, compromising the process even further.

Unless something is done, soon, to bring campaign spending back to merely exorbitant levels…well, I don’t even know how bad it might get. It does seem that in recent years there is a simple formula for elections: The best fundraiser wins. And it only stands to reason that the most corrupt candidate, and the one most willing to subjugate the rights and wants of regular people to those of the wealthy and corporations, will attract the most bribe money. I’m not sure how much such huge financial expenditures can do to gloss over major differences in the personal charisma of candidates (the Kochs’ apparent favorites, Scott Walker and Ted Cruz, are unlovable, pompous suits) or the appeal of their platforms, but we also haven’t seen many instances of the candidate with less money winning, either.

Most informed liberals decried the ascension of “New Democrats” like the Clintons and Obama—Democrats who talk a good game but take money from big business and happily do their bidding, just like Republicans—reducing the distinction between the parties to social wedge issues like abortion and gay rights. But the reason this happens is that, if they didn’t, they’d lose to better-funded Republicans. Labor unions, the Democrats’ historical cash cow, just don’t have the money to match what the Republicans are getting from businesses and the billionaires who own them. Meanwhile, Republican voters wonder why they can’t get anything done about border security, for instance, or other issues they care about that the 1% doesn’t. The truth is that these politicians are primarily competing for dollars, not votes. To get elected, they need money—lots and lots of it. You, the voter, you’ll come around. You’ll vote for your party’s candidate to avoid the other guy. It’s a cinch.

Meanwhile, in other developed nations, elections are publicly financed and election seasons last weeks rather than dominating political news with what amounts to celebrity gossip for two solid years. Bribery is still illegal. It’s hard to argue that theirs is not a better system. But at this point, removing the lucre from our elections seems an insurmountable task, only possible through a constitutional amendment, which is still pretty much impossible, considering that it depends on the very elected officials who benefit from the system as is.