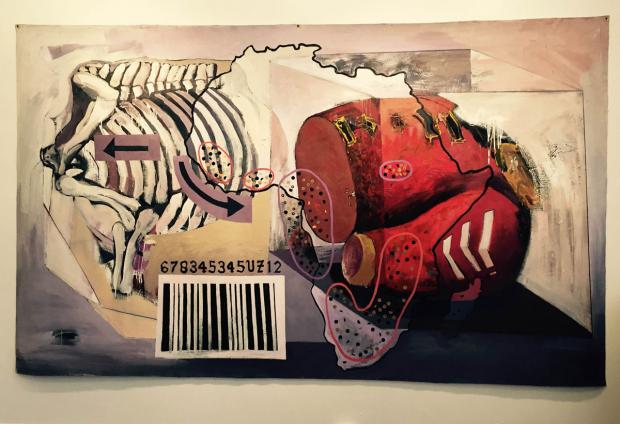 The title of artist George Afedzi Hughes’s exhibit now at the Indigo Gallery on Allen Street is Collisions [amp], the “[amp]” for “amplified,” I was told. Collisions with a connotation of violence, but also of connection, or connections, it would seem. As the essence of any artwork. How the images in a work connect to one another, and to us, and we to them. To the story they presumably tell. Hughes’s artwork—full of disparate images—raises question in these regards. Images that it’s hard to see how they connect. Hard to see what story they are telling.

His artist’s statement—on his website—helps somewhat. He talks about how “the overarching discourse” of his work “utilizes the turbulence of colonialism…to highlight parallels between that violent history and contemporary global conflicts.” And through imagery related to personal and historical narratives, he investigates “the evolution of postcolonial reconciliation” and “the residual effects of colonialism.”

The work consists of large-scale paintings and wall sculptures of wood pieces in multiple nondescript but roughly similar forms, painted in black and white and sometimes decorated with paste-on items—little portrait pictures, for example, as if from a school yearbook, or what look like the kind of little circular stickers used to reinforce the holes in three-ring notebook paper, for the pages you don’t want to lose—conglomerated into equally hard to decipher assemblages.

Occasionally the wood pieces resemble some recognizable form. Animal form for instance—one a little reminiscent of a giraffe, a little of a camel, it looks like. (Or is it just me?) And occasionally unmistakable forms—little sculptures on their own—incorporated into the assemblages. Little models of airplanes in one work that consists of multiple assemblages. The airplanes are of two basic types, passenger airplanes and military fighter planes. The multiple assemblages piece is called Route. Possibly it refers to the artist’s travel and transition from Ghana to other places, first to Europe, then the United States, and Buffalo. Possibly the military planes refer to conflicts related to colonialism/postcolonialism, that painful and often bloody transition. Possibly global conflicts.

The paintings are in bold images for the most part, and muted colors. Images ranging from pretty much straightforward representational, to painterly obscured representational, to abstract elements, often in chain-like patterns, sometimes with recognizable signs or symbols in the chain—letters of the alphabet, for example—sometimes not. The violence images range from a mastiff in attack mode to car crashes—collisions—and military aircraft, in flight or as post-collision wreckage. Also playing card images and religious images. A painting called Crucifix has a biographical look—not necessarily autobiographical, but possibly so—in that it contains a portrait photo along with some personal reference text—again not saying what person—and muddle of religious and athletic imagery, and the text legend, “I am an athlete and this is my crucifix…crucifix…crucible…” Along with imagery relating to soccer football, and two depictions of hands, one pierced with a nail, one marked with a “C” form that could be another sign/symbol or could be a wound. Other paintings include skeletal—bones—images. Not clear what it all means.

The George Afedzi Hughes exhibit continues through the end of May.