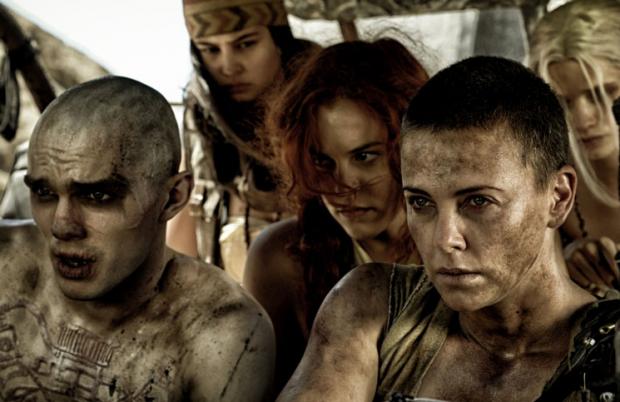 The three most precious commodities in the post apocalyptic outback of Mad Max Fury Road are gasoline, water, and women who look like Charlize Theron. Director and co-writer George Miller, steward of the Babe and Happy Feet films, has been trying to get one version or another of this fourth entry in his series off the ground long enough that at one point Mel Gibson could still have played the role of Max Rockatansky, the former police officer turned lone highwayman trying to survive in a nightmarish wasteland. At another point, Heath Ledger intended to take the part. Persistence has paid off, and Miller, age 70, has delivered a spectacular, stunt driven road chase picture starring Tom Hardy in the title role.

The original Mad Max was an energetic car chase/revenge film which made many critics’ top ten lists in 1979. Two years later, Miller and Gibson returned for the superior sequel, The Road Warrior, which married westerns and a punk rock attitude, and spawned a legion of imitators. Mad Max Beyond Thunderdome was a more mainstream, family-friendly take on the character, a comic book music video mostly remembered for Tina Turner’s turn as a villainess. Thirty years later, Miller has returned with a vengeance, and so has his cinematic creation.

Early on, Max is taken captive by the blood siphoning, gasoline stealing minions of Immortan Joe, a despot who provides his people with water in exchange for their loyalty and most attractive females. Gibson may have been deemed too old or too controversial to return, but Immortan Joe is played Hugh Keays-Byrne, who played the frightening villain Toecutter in the original. The first act, set mostly in Joe’s citadel, is a hellish hybrid of DeMille’s 1956 version of The Ten Commandments and David Lynch’s Dune; Joe even sports the same bright orange hair as Lynch’s villains. Very little that passes for normal human interaction or dialogue occurs until Theron’s Furiosa, entrusted by Joe to drive his battle truck and lead his marauders on a scavenging mission, bolts with Joe’s wives. Only when Max and Furiosa cross paths thirty minutes in do we feel the pull of recognizable human drama.

At the time of its release, The Road Warrior was considered ambitious for devoting its last half hour to a major chase sequence. With Fury Road, we get the reverse: half an hour of setup, followed by one epic chase sequence with a few pit stops for the remainder of the film. Miller and his co-writers dramatize character development primarily through breakneck action. As usual, Max becomes the reluctant savior for the sympathetic characters he encounters. The difference this time is that Furiosa doesn’t seem to need his help: she’s the most fully realized action heroine since Sigourney Weaver’s Ellen Ripley in Aliens, and Theron dominates the screen for most of the film. Hardy takes a more low key approach as Max; he is as physically battered as he is emotionally scarred, even more weary than Gibson’s interpretation. The cars and stunts are as important as the people in these films, and they are top of the line creations.

Mad Max Fury Road is rated R for intensity more than anything else, and clocks in at a traditional 120 minutes, a rarity for studio blockbusters these days. Miller has already announced Mad Max: The Wasteland. Hopefully we won’t have to wait thirty years to see it.