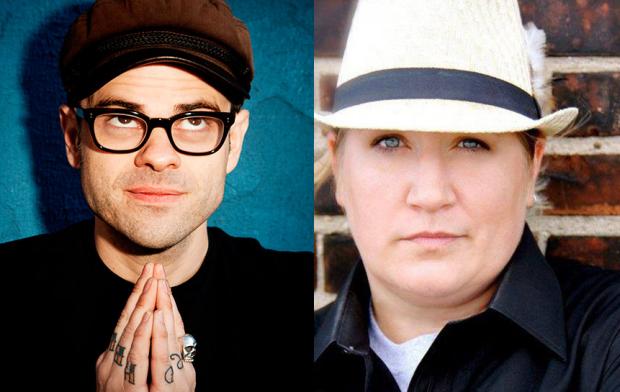 Comedian, activist, and provocateur Kristen Becker is hitting the dusty, shimmering trails of the Southern United States again this spring on what she is calling a “Movement for Moderates.” The deftly named stand-up comedy tour, “Loosen the Bible Belt,” will feature Becker’s pointed, personal, and playful storytelling, with the addition of Jay Bakker, a punk rock pastor who regularly preaches the tenets of tolerance across the nation.

“It was all for Louisiana last year. The idea was to expand it this year, and it worked out really well because the Deep South jumped on board and the ignorance spread like wildfire,” Becker joked. Unfortunately, the truth of this joke is very real. According to the Human Rights Campaign (April 2015), more than 100 anti-LGBT discrimination bills have been filed this year in 29 state legislatures—and not one Southern state went unscathed.

“When I was down there last year I was already planning on going back this year. I’m really committed to Louisiana as a whole because it’s a second hometown to me,” Becker said.

Offering people a personal connection with something that scares them can often be a successful exercise on the road to acceptance. “You can decide in your brain that something’s awful and make up all these ideas about it, but then when you see it it’s like, ‘Oh, wait. That looks like Aunt Shelley,’” Becker laughed. A serious concept introduced with levity is one of humor’s major functions in civil society, she believes.

“When you want to tell somebody something they don’t want to hear, it helps if you tickle them down below a little bit first,” Becker said of the role of comedy in civil discourse. “I’m no doctor, but when you laugh you get the feel-goods. Hence, ‘Laughter is the best medicine.’ If you can frame the argument or even a point of view to someone who has a closed mind and you can make them laugh while telling them, it seems like they absorb it more. You’ve evoked a positive, chemical reaction in a body while they’re hearing something that normally makes them angry. Hopefully you gain a positive association with LGBT and the whole idea of human rights as opposed to a knee-jerk reaction,” she said.

After seeing Bakker’s documentary, One Punk Under God, a few months ago, Becker’s idea to embark on an expanded tour of the South coalesced.

“He’s someone that speaks the language of the people I’m trying to work with. I don’t speak religion. I can’t argue Bible quotes. I can’t have a meaningful discussion with someone about the Bible and change their mind on anything. But Jay can. So, my reason to ask him was two-fold. It was because he could speak this language, but it was also really personal for me because I have a lot of friends who were raised Evangelical,” she said.

“There’s this whole population of people who are raised in a certain manner and then they reach this point in their life where they try to be their authentic selves and this one thing that they know and that’s important to them says, ‘Fine, you can do that, but now you have to leave.’ Jay is someone who’s close to their religion and close to what’s familiar to them,” she said.

Becker and Bakker first connected via social media earlier this year, and, after some initial discussion, the tour plans came together in three months’ time. Because of the timing of the new legislative season, Becker’s summer schedule, and the upcoming arrival of Bakker’s first child, there wasn’t a chance to sit and mull on the idea for long—it was now or never (or at least, much, much later). Things seemed too dire to wait, what with anti-LGBT law proposals springing up left and right across the swath of the Deep South—in Texas alone there are 20 new anti-LGBT laws being proposed in the state legislature this season.

“Sometimes you just gotta hurry up and make it happen,” Becker said. She and Bakker will begin their tour in Amarillo, Texas, on Thursday, May 21, with stops in four other Texas towns and 12 cities total.

Becker is hopeful that with Bakker, the tattooed preacherman whose flock congregates more naturally in a tavern than a traditional church, her comedy will be able to bring a bit of levity and personal connection to the current plight of the LGBT community, especially in the South where open discrimination against gay, lesbian, and transgendered people is very much alive and even par for the course.

Kristy Rock is the managing editor at BuffaloComedy.com and producer of the Milkie’s Comedy Open Mic, every Wednesday at 8pm.