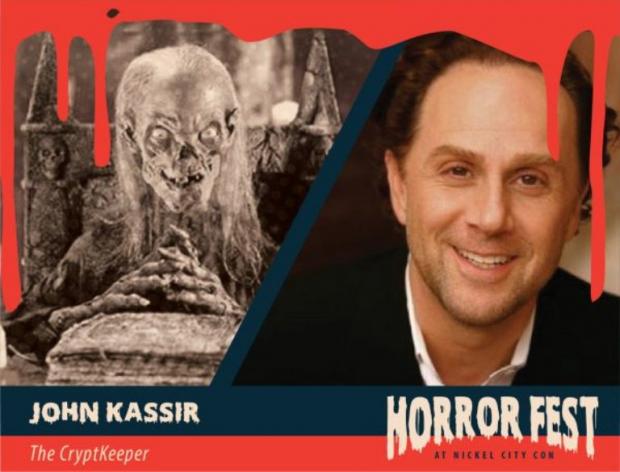 As the voice of TV host and spokesghoul the Crypt Keeper, John Kassir has enjoyed more than 30 years as part of the Tale from The Crypt franchise. Despite dozens of TV and film roles and grand prize winning spot on Star Search, Tales from the Crypt remains Kassir’s unfading link to pop culture.

“I’ve certainly done bigger projects where I’ve been on camera in and movies and things but Tales from the Crypt is one thing that keeps coming back,” Kassir told The Public ahead of his appearance at the Nickel City Con May 18-20. Kassir will also be the guest at a sold out screening of Tales From the Crypt: Demon Knight on May 17 at the Dipson Amherst Theater.

A sold out show for a nearly 15-year-old movie confirms Kassir’s theory that today’s Tales From the Crypt megafans grew up watching the late night HBO horror series, despite not being part of the mature audience producers had targeted.

“You know, when Tales from the Crypt was originally on the air, a lot less people had HBO and it certainly took off immediately, but the producers and myself never got the inkling that kids were watching the show,” Kassir said. “Now there’s a bigger fan base than ever, so kids obviously learned not only ‘This is cool,’ (they learned) ‘this was like my gateway drug to horror.’”

Similarly, Tales From the Crypt, the horror comic book series originally published in the 1950s, was influential on a young Kassir, who identifies with convention customers as a fan of pop culture and horror.

“At some of these horror conventions I’m really with the people I want to be with as far as fan wise and guest wise and star wise. I get the ‘fanboy out’ on some of them as well,” he said.

Kassir seemed to be on the fast track to becoming a household name in the 1980s. After beating Sinbad in the 1985 Star Search comedy finals, Kassir said he was constantly being recognized on the street. His public profile grew through seven seasons as a cast member on the HBO football series 1st & Ten, but Kassir’s off screen turn as the Crypt Keeper would eventually become his signature role. Being perceived as primarily a voice actor wasn’t something he was comfortable with at first.

“You know it was taking up more time than my on camera work, and at first I was resistant to it,” Kassir said. “But then, I was like, ‘You know what? This is awesome’ because as you get older, there (are) less parts for you on camera… So at that point I began to create all these other voices.  And as I get older, I’m like, ‘Wow, I’m not typed out by my age, race or even if I’m human or not.”

Those other voices would lead to dozens of voice acting roles in video games, TV shows and movies, including Meeko the raccoon in Disney’s Pocahontas.

The Crypt Keeper, who presented the individual horror story segments that comprised Tales From the Crypt, was initially presented in a more slow and ominous tone. Kassir said this was due to production limitations of the first Crypt Keeper puppet, which was only capable of basic facial movements at first.

Kassir, who had pitched the Crypt Keeper as a lively jokester, was able to see his vision come to life as the Crypt Keeper was upgraded to respond more quickly and be more animated. This would lead to the more comedic Crypt Keeper of later seasons, who would shamelessly spin off horror-related puns in increasingly outrageous segments.

“You know when I first started doing the show everything was really tightly scripted. I would improvise stuff in the studio and they would wind up writing something similar and go along with it,” Kassir said. “Like, I remember improvising the line ‘I love a girl who give you head and then lets you keep it!’ You know, thinking, ‘They’d never use that, right?’ Until the next week they put it in!”

John Kassir will appear at the Nickel City Con May 18-20, as well as at a sold out screening of Demon Knight on May 17 at the Dipson Amherst Theater. Ticketing information is available at Nickelcitycon.com