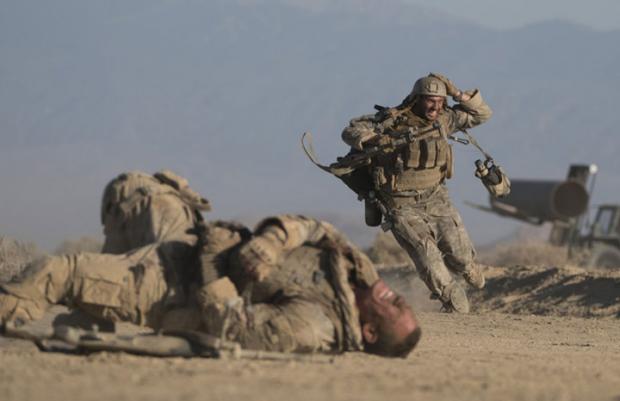 Iraq, 2007. The war is over—President Bush has declared victory and rebuilding is underway. This is not much comfort to Staff Sergeant Matthews (John Cena) and Sergeant Isaac (Aaron Taylor-Johnson) as we meet them, exhausted after having spent 20 hours in hiding at a construction site. Their mission is to wait for the sniper responsible for the corpses littering the area to come out so they can capture or kill him.

Eager to get back to base, Matthews gambles that the sniper has left the area—and loses. The sniper gets the upper hand, and all that lies between him and his chance to go home is a wall, the only structure standing in a sea of brown sand and scrub. It’s barely even a wall, more the remnants of one, maybe 30 feet long and six feet high at its highest, and likely to crumble if a stiff enough wind comes along. But it’s all that’s keeping the wounded soldiers from the way to dusty death.

In 2014, screenwriter Dwain Worrell’s The Wall won a spot on the Blacklist, the annual list of screenplays that were admired in the industry but as yet unproduced. You can see where that admiration came from: the notion of a minimalist film taking place in the course of a single day, with dialogue limited to the gallows humor between the two soldiers and interaction with the sniper who makes contact by radio and plays psychological games to try to flush out his quarry.

Director Doug Liman, who started out small with his debut Swingers but since graduated to blockbuster productions (The Bourne Identity, Edge of Tomorrow), clearly relishes to opportunity to go small here. He maintains tension at an even level as we focus on one solder, wounded, fighting back panic and pain, talking to an adversary he can hear but not see.

But as good as it is at what it does, The Wall in the end isn’t much more than a stunt. It doesn’t have anything new to say about war, either in general or in this example, and therefore doesn’t say much of anything at all. Unlike, say, American Sniper, it won’t polarize audiences because viewers of any perspective won’t be challenged by it. Is that a fair yardstick to measure the value of a film? Maybe not, but the situation is too fresh in our minds for us to look at it any other way.

It’s been more than 15 years since David Lynch began to fade from relevance in the cultural landscape. The release of Mulholland Drive (2001), one of his best films, was followed by little of interest to any but his most dedicated followers: short films made for his website, the endless and little-seen feature Inland Empire.

But when it was announced a year ago that he would make a follow-up to his 1990 TV series Twin Peaks, fans began to look back on his career. So the new documentary David Lynch: The Art Life arrives in theaters at a perfect time, as audiences have been reappraising his distinctive oeuvre (and just as the new Twin Peaks begins its run on Showtime).

Lynch has been the subject of more than a few documentaries prior to this, but to the best of my knowledge this is the first one in which he opens up about his early years, his childhood and college days. Lynch came to cinema by way of painting, the love to which he has returned in the past decade, and he is seen in the film silently working in his studio as we hear his voice recorded separately reminiscing. If in the past he seemed to be manufacturing his oddities for each new interviewer, what he reveals here is that those oddities are not a pose: he was as odd a kid as you might expect. There are memories of dark times (he describes his time living in Philadelphia  as “thick fear in the air, corruption and hatred”), but as much in character are the happy memories, the earliest being allowed to play in a mud pit his father dug in their back yard. It screens this week at the North Park along with a handful of his other films.