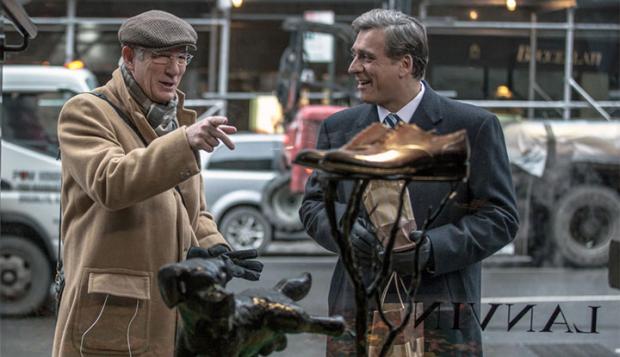 The title character of Joseph Cedar’s surprisingly entertaining and poignant film calls himself “a consultant” at one point. This isn’t so much a lie as a misleading statement. Norman Oppenheimer (Richard Gere) is really an operator, a promoter of sometimes dubious financial or political deals, an arranger. One prominent reviewer has called him a macher—a big shot in Yiddish—but this is something of an exaggeration. He’s more a wanna-be macher.

He’s trying to operate in the milieu of important New York City Jewish financial types and politicos, but he’s mostly confined to its border regions, if he is lucky. He’s an influence peddler of little influence. Norman, you understand, lacks neither optimism nor chutzpah, complementary attitudes. Early on we find him stalking the aide to a big shot, intercepting the guy on his jog through Riverside Park to push some tricky proposal, and getting rebuked for his trouble. “You’re like a drowning man waving at an ocean liner,” the aide says in irritated wonder. “But I’m a good swimmer,” Norman cheerfully replies. One of the tools of his improvisatory trade is to offer to introduce someone to a personage he doesn’t even know. Well, it might work, you know?

Following habit and instinct, Norman inveigles his way into a friendly relationship with an idealistically ambitious Israeli politician (Lior Ashkenazi), and succeeds beyond his over-optimistic expectations. “I picked the right horse!” he says in amazement. But it’s an accomplishment that leads to tragic consequences.

This doesn’t mean that Cedar (an American-born Israeli) is after bleakness in his film. Norman is informed by a sympathetic, if sometimes ironical wit. At the end, he’s still interweaving these qualities. Cedar’s humor and empathy extend to his visual treatment. The photography is sometimes used to emphasize or underline Norman’s situation and point of view, especially in a kaleidoscope manipulation of the imagery in a big, crowded scene.

Gere’s supple, piquant performance makes an improbable, shabby character into someone who elicits not just sympathy but understanding. Casting Steve Buscemi as the rabbi of a big New York synagogue was audacious, and successful.

Cedar relies on some rather implausible devices for his plotting and denouement, but he nevertheless has fashioned a wryly bittersweet fable of power and morality.