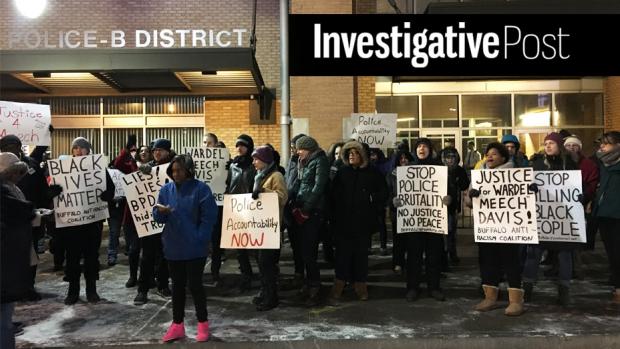 Community activists, echoing community distrust of law enforcement, have been advocating for change in the Buffalo Police Department.

Better training to avoid situations like police using a patrol car to strike a suspect.

Answers about the recent deaths of Wardel Davis and Jose Hernandez-Rossy during encounters with police.

And more oversight of a department that clears officers of wrongdoing almost every time they are accused of using excessive force against civilians.

The change activists are seeing involves not reform, but rifles. And they’re alarmed by it.

“God forbid, an event occurs, I would think the community wants the best equipment possible in the hands of the officers that are responding to it,” said Buffalo Police Lieutenant Jeffrey Rinaldo.

The way in which the department and Common Council have gone about the purchase underscores the disconnect between local authorities and activists, who have given voice to community concerns about police. Part of the problem comes down to the lack of communication between city officials and the public.

The Council, for example, dismissed a request for a public hearing to discuss the rifle purchase. And some activists express fears the rifles might be used against community members on routine patrols, although plans call for the weapons to be secured with supervising lieutenants and distributed only when a mass shooting or terrorist-type event occurs.

The disconnect leaves Desmond Abrams, a labor activist, feeling the public has no “decision-making power” because city officials have “insulated themselves from the people.”

Activists see a department that’s in need of more accountability before being given more firepower. Officers do not get performance evaluations, and the department does not have professional accreditation from the state, unlike 150 other law enforcement agencies in New York.

James Lopez, a criminal justice community organizer, said he thought the way the Common Council handled the vote authorizing the purchase of the rifles was “super-alarming” given the fact that many issues remain unresolved.  “I think that’s just a clear sign that they’re not necessarily viewing the concerns of the public as legitimate,” he said.

Buffalo police have takens steps in recent months to improve training programs in firearms, de-escalation, and the use of force, following a report by Investigative Post in the fall that exposed deficiencies. Until now, the police brass has bucked the need for scenario-based training, limiting use of force practice to a multiple choice test with 10 questions, for example.

Captain James McNamara, who runs training for the Amherst Police Department, said it’s imperative to place officers in adrenaline-inducing situations where they have to attempt to de-escalate and decide whether to use force. “It’s about being able to cope with those feelings and think through them.” he said. “When they experience this for real, they’ll have gone through this thought process, they’ll at least have done it in training.”

Fillmore District Councilman David Franczyk said the concerns of community members are valid but, in the meantime, the police “have to be given the equipment to perform their duty in a lawful and efficient manner.”

The 1999 massacre at Columbine High School in Colorado changed the way law enforcement agencies respond to mass shootings. Instead of waiting for a SWAT team to arrive to stop an attack, police recognized that patrol officers, usually the first on scene, are best positioned to stop a shooting rampage.

“Every second you delay, whatever person is attacking is going to be killing people,” said Pete Blair, executive director of ALERRT, a training center at Texas State University that the FBI has recognized as a model program.

For a patrol officer to quickly stop a mass shooting, law enforcement experts agree, they should use rifles because they are more accurate than the handguns officers carry. Attackers are also often armed with multiple weapons, or even with rifles themselves.

“If we’re going to ask [patrol officers] to assume that risk, we want them to have the best tools possible,” Blair said.

Until now, the Buffalo patrol officers have not had rifles to respond to a Columbine-type situation. Added to that, the SWAT team is manned by officers assigned to other units within the department and assembled on the fly when an emergency arises.

The type of rifle selected by Buffalo police has stirred debate. The Police Benevolent Association advocated for the purchase of AR-15s, which fire a more powerful bullet, but management decided to buy a rifle that uses the same .40 caliber bullet as the handguns officers use already. Amherst, the Town of Tonawanda, and Rochester all use rifles with higher-powered bullets, like the ones used in AR-15s.

Rinaldo said the decision to purchases these rifles with a lower caliber bullet was to minimize the possibility of a bullet going through buildings or homes—or even multiple people—and hurting bystanders.

The Common Council made the acceptance of the grant “conditioned on additional training for de-escalation techniques.”  But the department had already committed to the two programs cited in the resolution.

One 40-hour course teaches officers how to handle potentially volatile encounters with people suffering from mental illness. The other involves 16 hours of instruction in ethics and mindfulness, and coping with the psychological toll of police work.

In addition to these two programs, the department will improve several aspects of its training that experts told Investigative Post last fall fell short of national best practices.

The Buffalo police’s main shortcoming was its lack of scenario-based training, in which officers are placed in high-stress situations and have to make decisions about when and whether to use force.

As Investigative Post reported, the police’s use of force training involved only a written multiple choice test and its firearms training was limited to shooting at a target, neither of which, experts say, adequately prepare officers for encounters they’ll face on the street.

A sample question from the test: “The use of pepper spray should be considered before the use of physical force, true or false.”

This curriculum will start to change later this year. Buffalo police will reinstate training on verbal and physical techniques to execute an arrest or de-escalate a situation with the least amount of force. Multiple sources told Investigative Post this kind of training had not been done in years.

Rinaldo said officers will also receive training in the use of their new rifles and will undergo a mass shooting simulation, though the specifics of the training have not been fully determined.

These developments, however, have not helped improve uneasy police-community relations.

At community meeting after community meeting, protest after protest, people have expressed frustration at the state of policing in Buffalo and what they describe as a failure of Mayor Byron Brown and the Common Council to enact change.

Last week, activists attended a Council budget meeting to protest steady increases in the police budget. Discussion on the matter ended when North District Council Member Joseph Golombek and members of the public in attendance engaged in a shouting match.

Drew Ludwig, a pastor at Lafayette Avenue Presbyterian Church, said while it’s encouraging that officers will undergo additional training, community-police relations won’t get better if other issues are not addressed.

“There’s a tremendous deficit in trust for the department in general,” said Ludwig, who is also a member of Showing Up For Racial Justice, an organization geared toward engaging white people in addressing racism. “Before we increase firepower, before we invest in more weapons, why don’t we create systems of accountability?”

“A significant part of the community does not trust the police department because they only encounter them in enforcement circumstances,” said Steve Peraza, co-author of a report on local police-community relations published by the Partnership for the Public Good, a research group focused on social justice issues and civic engagement. “Until we can get the community to feel like the police is not just targeting them, the relationship will remain the way it is.”

On March 6, activists voiced their concerns about the grant for rifles by calling Council members and attending a caucus meeting to urge legislators to send the item back to committee to allow for a public hearing.

Any grant awarded to a city agency is subject to discussion by the appropriate Council committee and approval by the Council as a whole. While public hearings on committee items are not required, committee chairs are authorized to call such hearings.

Richard Fontana, Lovejoy District Council member, said the Council could have done a better job “getting the word out.” Prior to the vote, he talked to constituents on the phone and through e-mail about their concerns and his positions.

“A public hearing could have helped get the story straight,” said Fontana, who is the chair of the Finance Committee, where the grant was discussed. But he said he didn’t feel one was necessary before a vote.

In an e-mailed statement, Sean Mulligan, legislative assistant to Niagara Council Member David Rivera, noted that the Council “would have been within their right” to accept the grant without getting public input. Rivera declined to answer questions when approached by an Investigative Post reporter after a recent Council meeting.

“The only thing we asked from the caucus was, ‘Give us more time, send it back to committee,’” he said. “’We will bring you the public if you give us more time.’”

Instead of sending the resolution back to committee, the Council voted on it the next day.

University District Council Member Rasheed Wyatt said he believes the department is “moving in the right direction.”  “They are sensitive to what the Council has brought, to what citizens have brought forth,” Wyatt said.

Council members often point to their Police Oversight Committee as a proof of public engagement. But Lopez and other activists see an inadequate body. At the January meeting of the committee, with police management in attendance, Lopez, along with colleagues from various community and health organizations, advocated for better civilian oversight of the department and for the implementation of programs that offer alternatives to arrest and incarceration for low-level offenses. Lopez said people left the meeting “with worse perceptions of upper brass and police than they did beforehand.”

“They feel like they’ve gone there and that their concerns and voices were totally unheard,” he said. “It’s actually damaging the relationship between the public and police.”

“I’m glad they have a Police Oversight Committee to be disappointed about,” said Council President Darius Pridgen. “Although it may not be perfect, in some people’s perception, it’s moving a better direction than being dormant.”

Right before the Council unanimously voted in favor of the grant, Pridgen said, “We have addressed the concerns, though, I want to be clear, of the public that came to us.”

When asked whether the Council listens to public concerns on policing issues, Lopez responded: “Absolutely not.”

Daniela Porat is a reporter for Investigative Post, a nonprofit investigative journalism center focused on issues of importance to residents of Buffalo and Western New York. Listen to her companion stories on WBFO.