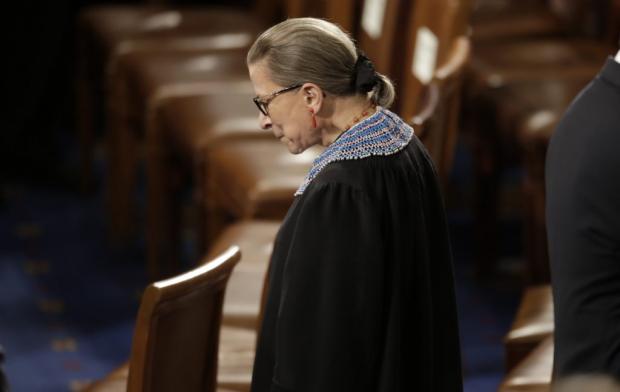 Ruth Bader Ginsburg may be an unlikely candidate for pop-culture idol, but, rather obviously, that’s part of her appeal. Ginsburg was the second woman to be appointed to the Supreme Court (after Sandra Day O’Connor) but she’s the first to be the subject of a graphic (comic) biography, The Notorious RBG, playing off rapper B.I.G.’s moniker. In Marvel Comic’s Deadpool 2, the title character pauses over her photo as he considers her for his X Force. Kate McKinnon’s hyper-burlesqued parody of Ginsburg may not be the first time a “Supreme” has been lampooned on SNL—I couldn’t verify that—but it does certify Ginsburg’s luminary status. Even her exercise trainer has written about her, and there’s a Hollywood film in the works.

Julie Cohen and Betsy West’s RBG, an intelligent, deftly made and very entertaining documentary about Justice Ginsburg, makes all this expansive mashup of the weighty institutional role of the Supreme Court and a lot of show business ballyhoo more understandable. At 85, the Ginsburg in RBG is an impressive person on both personal and professional levels and probably deserves to be the feminist heroine she’s become. Cohen and West are less successful in promoting the justice as a historically consequential jurist. Her historical mark is clearer as a groundbreaking litigator and advocate for women’s rights before Jimmy Carter appointed her an appellate judge in 1980.

As a person, she comes across here as a quietly, even shyly charming presence, but there are hints of steel here and there. One of RBG’s most winning scenes shows the giggling, chortling Ginsburg watching McKinnon’s zany caricature for the first time. (Her son and daughter explain that their mother may not even know how to turn on her TV at home.)

The story RBG tells is both personal and generational. Ginsburg is shown to have overcome the serious, sometimes crippling impediments confronting females who sought careers in the law and in myriad other areas of American life. One of only eight women in a class of 500 at Harvard’s law school, she became a valedictorian who couldn’t get a law firm job in New York because most firms wouldn’t hire women in the 1950s. From her eventual position at Columbia University she undertook a series of largely successful challenges to the legally sanctioned, ingrained discrimination repressing women, arguing six cases in the Supreme Court, and winning five, over a fifteen-year span. This was historically important, and of both symbolic and practical importance. (The movie makes clear that the unusual domestic support of her late husband Marty was of substantial assistance, freeing the mother and wife to pursue this work.)

Cohen and West cogently and accessibly summarize these lawsuits, including with a few fascinating audio excerpts of her oral arguments. (At one point, the rightist Justice Rehnquist flippantly asks her, “So, you won’t settle for Susan B. Anthony on a silver dollar?”)

RBG makes a warmly human, informative case for Ginsburg’s character and importance as an advocate in the 1960s and 70s, but it’s less persuasive in suggesting she’s a major and creative figure as a jurist. Years ago, political scientist Peter Irons called her a “cautious” liberal, “sticking to precedent whenever possible, and writing careful, precise opinions that do not stake out any new constitutional ground.” Her record on the Court of Appeals and the Supreme Court has largely borne this out.

She’s also exhibited a very flawed, conventionally liberal political judgment on occasion, as when she suggested a problem with Roe v. Wade was that it didn’t sufficiently allow the states to experiment with abortion law variations. The movie avoids this, but Ginsburg evinced a substantial political miscalculation. Ironically,RBG frames matters like this informatively, even when it’s inadvertent.

Sebastian Lelio’s Disobedience takes us into the patriarchically traditional society of Ultra-Orthodox Judaism, one where women are expected to marry and serve their husbands, participating in their community in a distinctly secondary role. Our “guide” into this ritually defined world, semi-separate from the bustling, churning secular society about it, is Ronit (Rachel Weisz), an art photographer in New York. She returns to North London and the faith-based world she was born into when her father dies. He was a rabbinical leader there, and she rather obviously seems to have been estranged from him and this Jewish society, but we learn very little about this. Lelio, who co-adapted Naomi Alderman’s novel, doesn’t ever really convey Ronit’s feeling about this faith or her father. He seems to content himself with capturing some of its atmosphere, in synagogue and the surrounding neighborhood. He uses a subdued color palette and some in-close photography, as well as some wide-angle long shots to bring us into this world, but he does little to evoke belief and doubt, or the shifting relationships involved here.

Ronit is welcomed by Dovid (Alesandro Nivola) her father’s protégé. He’s married to Esti (Rachel McAdams), whose long-repressed attraction to Ronit is reawakened by her return. Lelio has successfully worked with female-centered stories before (Gloria, e.g.) but here he devotes effort to depicting the passion binding these two women without ever dramatizing what’s at stake. The characters are too opaque despite some skilled acting, especially Nivola’s blindsided Dovid. The movie is too dramatically sterile.