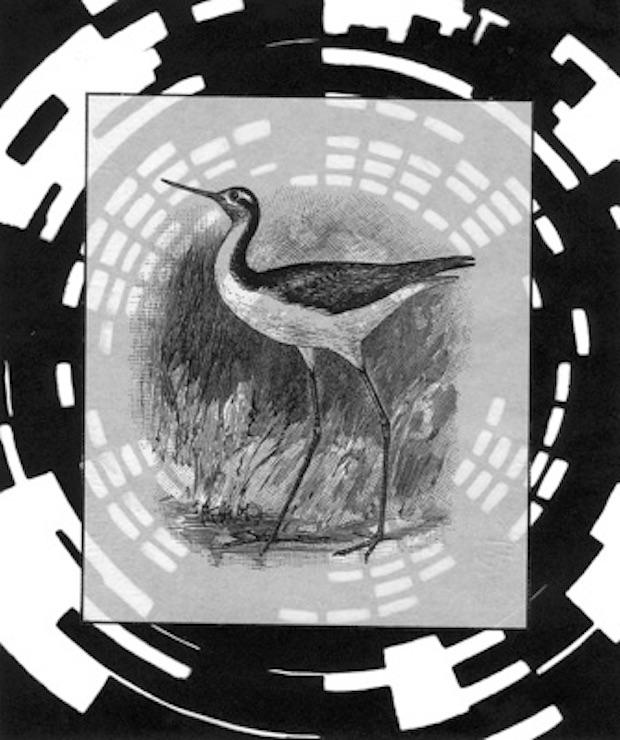 Artist Adele Henderson’s exhibit at the Indigo art gallery is in reference to the startling information that since the turn of the 20th century, approximately half of all animal species worldwide have become endangered or extinct.

The exhibit is entitled Red List and consists of 50 or so illustrations from the 1898 edition of the Century Dictionary and Cyclopedia of nowadays extinct or endangered species. Engravings or similar technique representations by numerous anonymous artistic hands, enlarged and reproduced as lithographs, plus various additional effects, including marginal handwritten relevant facts and commentary, collage items, found objects, and subdued background graphical and verbal content of seemingly problematical relevance but ultimately suggesting dimensions beyond the ostensible strict scientific presentation regarding the scope and magnitude of current world species extinction—more indicating the tragedy of it all, the industrial world crime against nature. The titular Red List is a comprehensive global inventory of conservation status and extinction risk for plant and animal species published by the International Union for the Conservation of Nature. (Don’t tell Trump about it; he’ll want us to drop out of it.)

Henderson’s list starts with the late, lamented passenger pigeon (Ectopistes migratorius), once the most abundant bird species in North America. Flocks would blot out the sun for minutes as they passed across the sky. Incredibly, the species was extinguished by hunting, by humans, with guns. Copious minuscule script handwriting in the picture margins informs—among other interesting data—that the passenger pigeon was last seen in the wild in 1901, and the last example of the species died in captivity, in the Cincinnati Zoo, in 1914.

Among the more spectacular species, the marvelous spatuletail (Loddigesia mirabilis), with its extraordinary tail feathers. Amid a target image circle and crosshairs, extending on the horizontal axis from “past” to “future,” on the vertical axis from “nostalgia…flow” above, to “regret…worry” below.

Among the more biologically interesting, the alternately designated Tasmanian tiger or zebra wolf (Thylacine dasyure), a marsupial resembling a dog or wolf, and that occupied a similar ecological niche—that is, predatory—to the wolf.

Also depicted is the polar right whale (Balaena mysticetus), which is Melville’s right whale, Greenland whale, true whale, great mysticetus, and various other names he applies to the species, the second overall in rank and eminence in his comprehensive catalog of cetaceans, right behind the sperm whale, Moby Dick’s species.

The lithographs are in black and white, like the originals in the source 10-volume dictionary and cyclopedia, but with occasional color additions, such as for the Carolina parakeet (Conuropsis carolinensis), the bird itself depicted in black and white, but under the picture is a strip of seven paint color swatches, including red, orange, and five shades of green to blue-green. Or the rufous-throated dipper (Cinclus schulzi), with a touch of red applied—rouge-like—over the throat feathers.

Two smaller series by the same artist are in a small room off the gallery main room. One is entitled Color Forecast and consists of sheets of various paint color swatches, in hues on a given sheet appropriate to a particular inner directional purpose or thematic—such as, namely, Authenticity, Spirituality, Connectivity, Cocooning, and Sanctuary—together with brief verbal expositions as to why each purpose or thematic might be useful or appropriate in the Trumpian era. For example, for Spirituality, “as the doomsday clock ticks toward midnight…reawaken inner spirituality with celestial inspired colors” like “Solar flare,” a bright yellow, or “Andromeda,” a peaceful blue. Or for Cocooning, in a time of “heightened levels of political polarization,” colors such as “Trickle-down bling,” a deep pink, or “Bourbon smash,” brown to mauve.

The other smaller series is entitled The Sun and consists of circular graphs—of some complexity, it should be noted—on various solar data for various locations around the world: Seattle, Tel Aviv, Reykjavik, Copenhagen, Bangkok, Moscow, and Buffalo. To interpret which, it would be useful to have an advanced degree in meteorological science and another in reading complicated graphs. Maybe best settle for appreciating the colorful circular graph patterns.

The Adele Henderson exhibit continues through May 27.