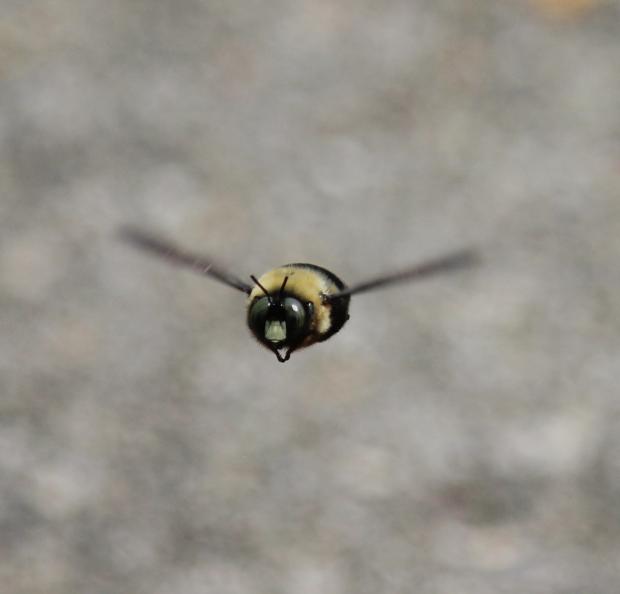 American Bumbebee (Bombus pennsylvanicus) one of 20 species of native bumblebees found in WNY- Once common but now in 90% decline because of habitat loss and overuse of agricultural chemicals.
by
Jay Burney
/ May. 15, 2015 10am EST

When Governor Cuomo announced the ban on High-Volume Hydraulic Fracturing (HVHF)  in New York State last December, the remaining details included the release of the Final Supplemental Generic Environmental Impact Statement (Final SGEIS).  This was accomplished this week when the New York State Department of Environmental Conservation (NYSDEC) released the document on Tuesday 13. This document is essentially a final review as a part of the NY State Environmental Quality Review (SEQRA) process that explores the environmental and social impacts of the activity in the state. The State now has 10 calendar days to release the Findings statement, which will include the criteria for enacting the ban in New York State.

Reaction to the release of the Final SGEIS by environmental and business organizations around the state were quick after a years long process starting in 2008 of creation, review, and publication. NYS received over 260,000 public comments on one of the most controversial and complicated decisions and regulatory process that the state has engaged in.

Kate Sinding, director of the Community Fracking Defense Project at the Natural Resources Defense Council  released a statment that said “New Yorkers have valid concerns about the threats fracking would pose to the air we breathe, the water we drink and the communities we live in,” she said. “In the coming days, we will be digging through this lengthy analysis with a fine tooth comb. The governor has rightfully let science and the will of the people be his guide, despite pressure from a powerful industry. He should continue to proudly stand his ground.”

Environmental Advocates of New York Natural Resources Associate Liz Moran issued the following  statement: “New Yorkers asked Governor Cuomo to follow the science, and he did. Hundreds of thousands of people took time out of their personal lives, educated themselves on the danger of fracking, and engaged with their government in a way we haven’t seen in years. This is a really proud moment for every one of them because protecting public health triumphed over industry pressure.

There are thousands of pages of fine detail to sort through, and we know much work remains, like banning other states’ fracking waste from being dumped inside our borders. This is an enormous victory for Upstate and all New Yorkers, and it gives hope to citizens across the country fighting back against a deep-pocketed industry!”

State Business Council President and CEO Heather Briccetti was among those to quickly object to the final nail in fracking’s coffin. She said it is “profoundly disappointing that fear and misinformation have won the day. The Business Council and its members devoted significant time and effort to the development of rigorous regulations that would allow high volume hydraulic fracturing to be done safely in New York,” she said in a statement. “Unfortunately, the Department of Environmental Conservation ignored their statutory responsibility to promote the development of New York’s plentiful oil and gas resources. We are confident that today’s decision will ultimately be reversed. But for many New Yorkers looking for new jobs and new economic opportunity, that day will come too late.”

Greg Biryla, Executive Director of Unshackle Upstate  a business reform organization dedicated to making New York  “a stronger place to do business” said “Allowing safe, responsible natural gas development in the Southern Tier would have created thousands of good paying jobs in a region that truly needs them. By effectively banning it, New York has missed out on a transformative economic opportunity. We continue to be profoundly disappointed that the state has embraced fear over facts.”

Environmental groups and activists across the state encouraged the ban because of the potential and documented environmental impacts including water pollution, habitat destruction, negative health impacts on New Yorkers, false climate change solutions, and concerns that the industry would hurt the economic opportunites for small businees and local economies over both thte short and long term.

UPDATE: “New York Fractivists should Rejoice, but must stay Vigilant”  by Arthur Giacalone/With All Due Respect blog

Although anecdotal reports from WNY beekeepers indicate that local honey bee colonies faired relatively well here last winter, a new report issued by the Bee Informed Partnership, a consortium of universities and research laboratories, says that a survey of 6,000 beekeepers across the US reveals that colony loss in the 12 month period ending in April was 42.1 percent, up from 34.2 percent the previous year.

Most hard hit were commercial bee keepers who rent colonies to farmers during pollination season.

Dr. vanEngelsdorp said that one of the reasons for the summer collapse has to do with poor nutritional opportunities for bees during the summer. “Rising crop prices have led farmers to plow and plant millions of acres of land that was once home to wildflowers; since 2007, an Agriculture Department program that pays farmers to put sensitive and erosion-prone lands in a conservation reserve has lost an area roughly equal to half of Indiana, and budget cuts promise to shrink the program further.

Other factors in the loss of honeybees include the Varroa mite, and the use of neonicotinoids, a class of pesticides that are commonly found in home garden products and used almost universally on many major crops in the United States. The European Commission has banned the use of three variants of the pesticide on flowering plants, citing risks to bees.

These and other chemicals including the commonly used herbacide Round-up have been linked to the vanishing of beneficial insects and native bee’s including the bumblebees, butterflies, and the iconic Monarch Butterfly. If you use any of the products listed here, you may want to reconsider your gardening techniques.