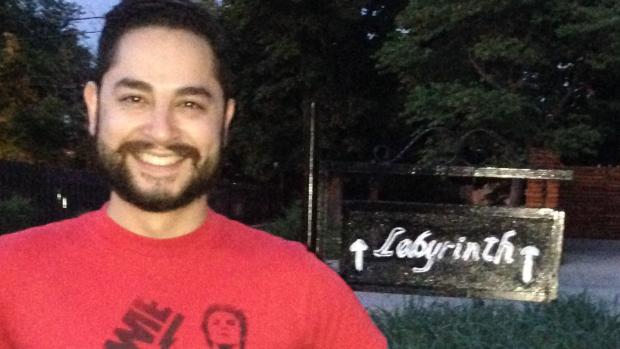 For such an affable fellow, Anthony Alcocer has played an awful lot of nasty characters. As Treat in Orphans at Second Generation, he had significant violence issues; he was ruthless as Injun Joe in The Adventures of Tom Sawyer at New Phoenix. He’s been fascistic Javert in Les Miz (Rocking Horse Productions) and sociopathic Prince John in The Adventure of Robin Hood for Theatre of Youth. There’s even a Count Dracula (American Repertory Theatre) in his resume. Now he is playing Elliot Ortiz in Water by the Spoonful at Road Less Traveled, an unforgiving man whose spiteful nature lets him justify pushing his emotionally fragile mother, a woman in recovery from drug addiction, over the edge.

Maybe it’s his ability to sneer while letting his coal-black eyes go dead. Maybe it’s the way he lets his characters smile smugly while others suffer. Rest assured; it’s an act. Alcocer’s joyful sense of fun comes through in a less frequent but equally satisfying range of lighthearted roles, like goofy Aldolfo in The Drowsy Chaperone at MusicalFare earlier this season. Whatever the role, Alcocer commits totally. There is never the glimmer of a smirk when he lands a deadpan joke. There is never a hint of hesitation or actorly “please like me” behavior when he plays the villain. Alcocer goes full-throttle for every role and it has made him very popular on the Buffalo theater scene. In just five years, he has racked up an impressive roster of roles here.

“I can’t put a price on how Buffalo has accepted me as soon as I arrived here,” says Alcocer. “The relationships I’ve formed and the collaborative efforts from one and all still make me grin from ear to ear every day.”

Water by the Spoonful is a Pulitzer-winning play by Quiara Alegria Hudes, the second part of a trilogy based on events in her own family. Summaries of the plot tend to diminish its rich interweaving of fully drawn characters. It is often described as a play about drug addiction. That’s the least of it. The play explores the ways in which our lives interconnect, either to help us navigate the world, or to defeat us. To be fair, there is much more to Alcocer’s character than mere cruelity. He is a man who endured a difficult upbringing who is now tormented by the memory of his military service in the Iraq War. His emotional injuries are mirrored in the permanent physical disability he acquired in Iraq, and he is literally haunted by the ghost of an innocent civilian he likely killed. This experience, ironically, fuels his inability to forgive others, while heightening his sense of life’s injustices. The Road Less Traveled production, directed by Scott Behrend, is powerful and elegant affair, with an exquisite set design by Dyan Burlingame featuring an arresting water fall beneath a surreal tree canopy, dramatically lit by John Rickus.

Alcocer sees his character in the context of the play’s history in a way that helps him bring reality to Elliot’s story.

“[Quiara Alegria Hudes] used her real life relationships to explore addiction, recovery, and the sources of strength and support required to fulfill the journey,” he observes. “Using the actual events in her cousin Elliot’s life to write this incredible character is thrilling. Knowing that it wasn’t made up on the spot for dramatic effect, that there is an actual living and breathing Elliot who went through these current and relatable issues is a wonderful chance for me to be authentic and attempt to convey the complexity of very current and real issues.”

Water by the Spoonful continues through May 24. Here, Anthony Alcocer submits to The Public Questionnaire:

What word would your friends use to describe you?
All of the answers that I received were conveniently rolled into one word: charismatic.

What aspect of the character you are currently playing is most unlike you?
Elliot has a ton of baggage. Fractious relationships, guarded secrets, haunting past. He keeps almost all of it bottled up. I’m thankfully much more free of spirit, and someone who tries to solve my problems head-on and right away.

What aspect of the character you are currently playing is most like your own personality?
Elliot and I both have a short fuse, but are softies when it comes to our mothers.

When and where were you the happiest?
Camping with my family and friends, every year, in the woods, with no clocks, no agendas, and no cares.

What is your idea of hell on earth?
Stuck in an elevator with very loud, loquacious people who have terrible grammar.

What is your greatest fear?
Exile.

Which talent do you most wish you had?
The ability to use language in order to blend in with any group of people, anywhere, and therefore be welcome at any time.

What superpower do you most wish you had?
Control, sense, and alteration of The Force.

What would you change about your appearance?
I truly wish I were a few inches taller.

What trait do you most despise in others?
Passive aggression.

What trait to you most despise in yourself?
Vindictiveness. I wish I were more forgiving.

What do you most value in your friends?
Their willingness to howl at the moon with me and love me like a brother.

What do you consider to be your greatest accomplishment?
A continuing work, penning my parent’s love story.

What is your guilty pleasure?
Reading public comments online about sports articles. People will spew vitriol about one another if their hometown team is involved, and it always cracks me up.

What character from fiction do you identify with most?
I live my life by a certain set of rules, and so does Larry David on Curb Your Enthusiasm.

What person from history do you identify with most?
Brigadier General Joshua L. Chamberlain, because sometimes you just have to do whatever it takes to hold the end of the line.

What do you consider to be the most overrated virtue?
Piety.

On what occasion do you lie?
I’ve been giving the same B.S. excuse to get out of speeding tickets since I started driving.

What was the subject of your last Google search?
“Best stain for decks.” Amy and I bought our first house.

If you come back in another life, what person or thing would you like to be?
The fearless jungle cat I was always meant to be.

What is your most prized possession?
The bond I have with my siblings.

What role, in which you will never be cast, is actually perfect for you?
I fantasize about playing a live-action Jack Skellington on stage.

What is your motto?
Knowing a little bit about a lot can take you a long way.