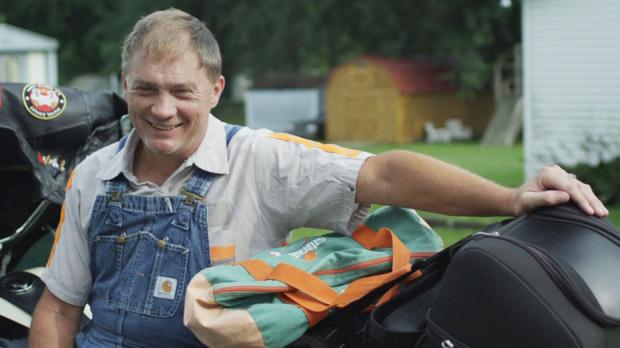 I doubt I’ll enjoy any movie I see in the rest of 2015 as much as Finders Keepers. Here’s the plot: A guy buys a barbecue smoker at a storage locker auction, takes it home, and finds a semi-mummified human leg in it. (Did I mention that this takes place in North Carolina? Did I need to?) He turns it in to the police, but after the local TV news reports on it he regrets not keeping it; surely, he thinks, people would pay money to see something like this. He does charge people money to see the smoker where the leg was found, but finds this insufficiently lucrative.

The original owner of the leg turns out to be a guy with drug problems who lost it in the plane crash that killed his father. He had been planning to use it as part of a memorial to his dad and wants it back. But the guy who bought it claims the legal precedent set out in the title. This is when the story starts to get strange.

This sounds like it might be a new movie by the Coen Brothers, but in fact Finders Keepers is a documentary made by a pair of filmmakers, Bryan Carberry and J. Clay Tweel, using footage of the two foot wranglers beginning in the early days of their struggle in 2007. There are a fair share of laughs at their expense—it’s hard to keep a straight face when Shannon, the would-be huckster who wants to exploit the leg, tells the camera in a molasses-thick Southern accent, “I’m pretty smart—I guess y’all figured that out by now.” But as the plot thickens our appreciation of them deepens, as we look into their troubled pasts and difficult lives.

Finders Keepers is one of two dozen new films I saw recently in Toronto at Hot Docs, North America’s largest documentary film festival. There are more documentaries than ever being made—technology has made them easier to produce, and those hundreds of cable channels provide a demand. That’s what makes a festival like this so important: Because such a small proportion of documentaries get the attention of a theatrical release, it’s essential to have some kind of a showcase to highlight the good ones.

Of course, the world being the difficult place it is, most of the films I saw were not as lighthearted as that Carolina tall tale. A popular theme was crime and enforcement, an issue we’ll probably never stop struggling with. Thought Crime, which has just premiered on HBO, considers the case of a New York City police officer who in his off hours liked to unwind in internet chat rooms where he fantasized about raping, killing, and eating women. When his wife found out, he was arrested and put on trial. These are utterly horrible fantasies, presented in unflinching detail with excerpts from transcripts of his chats. But did he actually do anything criminal? It’s by no means an easy question, and filmmaker Erin Lee Carr presents every side of the debate fairly: It is to her credit that you come away from the film not knowing what to think.

Welcome to Leith recounts another story of a people looking to prevent a crime that hasn’t happened. A nearly deserted town in North Dakota becomes the new home to Craig Cobb, a white supremacist who wants to import his fellow travelers and take over, establishing a community. As only 24 people live in Leith, he may well do it unless his neighbors can stop him. But how? You come away from the film realizing that nothing Cobb could ever do to these people is as bad as what they do to themselves out of fear, which may have been his plan all along.

Fear is also central to Peace Officer, an all-too-pertinent study of the militarization of modern American police forces. In Utah, Sheriff Dub Lawrence put together the state’s first SWAT team in the 1970s. Thirty years later, that same team kills his son-in-law in a standoff that should have been handled without bloodshed. Lawrence’s efforts to investigate what went wrong are paralleled with a history of the federal government’s programs to put heavy weaponry in the hands of local police, initially to fight the “war on drugs” but eventually to do anything they want with it, including serving warrants. (A perfect double feature: Tom Swift and His Electric Rifle, about the American manufacturers and marketers of the taser, a weapon whose problems started to become apparent long after it was put into common use because it was never properly tested.)

Another unanswerable question: What do we do with sex offenders after they have served their sentences? Pervert Park follows the residents of a trailer camp in Florida set up as a halfway house for people who almost literally have no place to go after finishing their prison sentences. It may be a function of who was willing to talk to Swedish filmmakers Lasse and Frida Barkfors that most of the interviewees argue that they were railroaded or imprisoned for relatively minor offenses; then again, a few of the revelations here are so disturbing that you realize an entire film of such stuff would be hard to sit through.

On the lighter side, another perennial Hot Docs theme is celebrity and those who would do anything to achieve it. (Finders Keepers certainly fits here.)

The Cult of J. T. Leroy tracks the rise and fall of the author who burst on the literary scene in the late 1990s with tales of his abused childhood and adolescence as a sex worker. He was embraced by an astonishing range of glitterati, all of who managed to overlook that Leroy in person was clearly not what he claimed to be. The Beaver Trilogy Part IV presents the story behind the story that director Trent Harris filmed three times trying to get it right: first as the documentary of a small-town Utah teen who impersonates Olivia Newton-John at a talent show, and twice more in fictional versions starring then-unknowns Sean Penn and Crispin Glover. Orion: The Man Who Would Be King remembers Jimmy Ellis, a charismatic Alabama singer with a great singing voice. Unfortunately, he sounds exactly like Elvis Presley, so much so that his shady manager puts a mask on him and sends him on the road after Elvis’s death as “Orion,” implying that he may actually be the King returning to the stage after having faked his death.