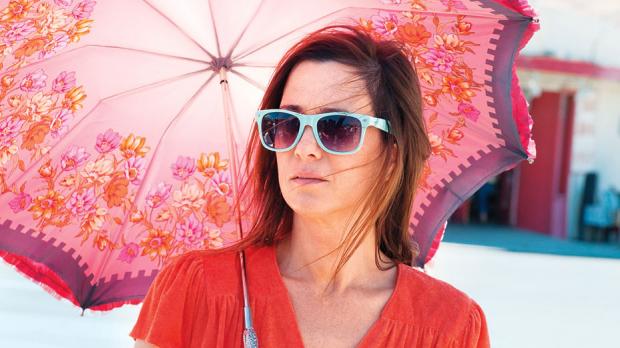 In Martin Scorsese’s 1980 film The King of Comedy, Rupert Pupkin (Robert DeNiro), a madly obsessive, no-talent claimant to TV talk show celebrity, decides to kidnap the host of a New York-based show to extort his way onto it and win his “deserved” stardom. Alice Krieg (Kristen Wiig), the titularly self-referred wacko in Shira Piven’s Welcome to Me, doesn’t have to go to such drastic excess to secure her own talk show. After she wins $86 million in a California state lottery, she has the wherewithal to buy herself one. Which she promptly does. And it’s called Welcome to Me because it’s all about Alice. No guests, no currently popular topics, just her chronic complaints, fixations, oddball and dubious nutritional advice—in other words, the world according to Alice.

Alice isn’t as dangerously delusional as Rupert Pupkin, but she has nothing like a reliable purchase on reality, nor much of an interest in nor any experience outside her own self-generated and inwardly focused concerns.

Alice was once a veterinary assistant, but now retired on disability, she spends her days in Palm Desert, California absorbed in tearfully watching cassettes of old episodes of Oprah—her self-help lodestar—and shabbily unreliable television informercials. (There’s a satirical inflection here, of course, and you may wonder if Oprah was in on the joke when she agreed to this.) Alice has stopped taking her Abilify, which worries Daryl (Tim Robbins), her psychotherapist. He tries to get her to reconsider. She responds by reading “a prepared statement,” a means of communication she resorts to on other occasions. She is, she says, substituting a high-protein, low glycemic index regimen. String cheese is not a psychiatrically recognized medical treatment Daryl dryly notes, as Alice continues eating the stuff in his office.

Alice is single-mindedly committed to her own autobiographical truths and bill of complaints. This is wicked, if low-key comedy, and it gets sharper as she dumps millions on a barely surviving little TV production company, ordering up scores of episodes of her talk show. Welcome to Me, the show, is part confessional, with weird cooking and nutritional advice (how about a meatloaf cake with mashed potato frosting?), and most dramatically, her reenactments with “actors”—whoever shows up at the studio that day—of injuries she believes she’s suffered at the hands of cruel, faithless friends. Alice is apt to loudly interrupt these little dramatizations to berate these stand-ins for persecuting and betraying her.

Welcome is oddly, unexpectedly, and sometimes uncomfortably amusing. It can’t have been an easy combination to create and sustain, and it’s surprisingly successful in maintaining its subtlely shifting balance. This is in no small measure a product of Wiig’s often uncannily evocative performance. It’s not a series of sharp vignettes or sketch business and turns such as she produced on SNL or in big-yuck movies like Anchorman 2. For this one, she’s come up with an expertly realized, finely tuned performance that anchors and propels the movie. All the performances are skilled, including Robbins’s Daryl. The actor plays it more or less as a straight man to Alice, but he contributes to the amusement, and to a poignant effect. Linda Cardinelli ably brings off her part as Alice’s inexplicably patient, generous, and exploited friend Gina. Piven’s background is in theatre and she must have a facility for working with actors.

Scorsese’s movie was released the year after the publication of University of Rochester historian Christopher Lasch’s book The Culture of Narcissism, a best-seller that a lot of people, including President Jimmy Carter, cited, but, apparently misinterpreted. Lasch wasn’t concerned with describing a society characterized by great numbers of people devoted to self-love, but one in which many lacked both a sound sense of self and an empathetic response to others. Lasch didn’t think most Americans were pathologically crippled but that an increasingly competitive society “dominated by large bureaucratic organizations and mass media” encouraged mild symptoms similar to those of clinically diagnosed narcissism.

Piven and writer Eliot Laurence seem to have done some digging in psychiatric literature and categories, but their “diagnosis” of Alice relies on that convenient default psychiatric evaluation of borderline personality disorder. Alice really displays an imperiously, grotesquely narcissistic indifference to others or to social responsibility. She’s unselfconsciously adopted media values and methods; they shape and animate her inner life, as well as her more perverse interpretations of the world.

Welcome is, of course, a spoofy take on American fascination with media renderings of life, including aggressively pushed self-help regimes, but a large part of its achievement is in its indirect pursuit of this via the depiction of the delusionally self-engrossed Alice. Welcome offers no social diagnosis or overt lesson. It’s rather quiet and distanced, even as its protagonist engages in sociopathic outrages on her TV show.

Piven manages the proceedings with a subdued intelligence, despite the picture’s eventually crude and disturbing quality. She hasn’t always kept the pacing from dragging here and there and things are resolved a little abruptly, and perhaps bittersweetly.

But Alice is a trip, and so is this movie.