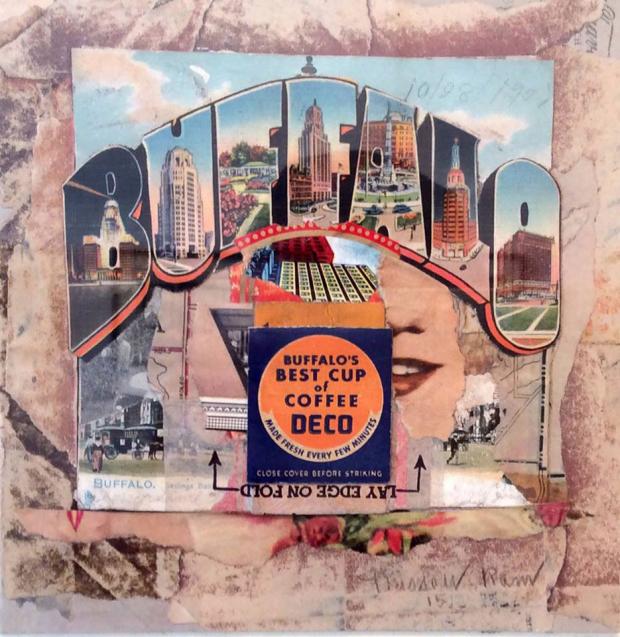 Eight artists try their hand at collage art in the current TGW Gallery show, with some outstanding results.

“Collage loosely defined,” according to gallery operator Robert Vitrano. One benefit of which is that it allows Marie Hassett into the show, her exquisite work that might more readily be characterized as fabric art. Sewn rather than glued—the term collage means glued—but the essence idea of collage seems more layered, and these are layered. Fabric and thread, used to tack down the fabric scraps and snippets, but also create feathers that look like real feathers, embroidery complete birds, birds’ nests. Birds are a theme of her work, and the present parlous and further deteriorating environmental actuality that threatens the extinction of numerous bird (and other animal and plant) species.

Two of the works depict listed endangered species, the whooping crane and Kirtland’s warbler. Expository wall text points out that whooping crane numbers in the late 1930s had fallen to 20 individuals, basically due to habitat loss. Whereupon a wintering grounds refuge was created in Texas, and the total number has now climbed to 300. The Kirtland’s warbler, which breeds only in Central Michigan, then winters in the Bahamas—not a bad lifestyle up until now—is also threatened due to habitat loss. Due in turn, in part, to climate change. Another work is on the brown pelican, a species that nearly disappeared in North America between the 1950s and 1970s due to prevalent use of pesticides. Following a ban on DDT in 1972, the species rebounded to a degree that in 2009 it was removed from the endangered list, but then a year later was again threatened in the aftermath of the Deepwater Horizon oil spill.

As a further case in point about species extinction, one work is about the dodo. This is a triptych, one panel a dodo skeleton in sewn fabric, another with tiny, delicate bird bones thread-tacked to fabric background, and another with a shadow stain on fabric in vaguely dodo form, and tiny bird bone. Part of why the dodo became extinct was its lack of fear of the human species. Double warning there.

Joan Fitzgerald’s collages consist of photos or photo fragments of some rural, humble, and somewhat deteriorating—the worse for wear—cottage or cabin, applied to canvas of a predominant deep maroon hue with other hues in the mix, and marked with scribble and scratch marks made as with the other end of the paintbrush.

Patti Harris’s collages about the American Southwest contain substantial actual bits and pieces of the Southwest. Sand, gravel, shells, seed pods, twigs, vegetal fibers, even a fossil ammonite. Other of her pieces—these more sculpture than collage—are built on or around what look to be old wood-construction forms for now long-abandoned industrial processes. Possibly mold forms.

From Gerald Mead, two works in his minimalist manner. One called Continuum Redux contains a long, narrow, horizontal strip of colorful printed matter and an optical viewing lens with vertical hairline. The other, called Via Crucis XII, contains a science lab glass pipette and small picture frame containing minuscule graphic or sculptural depictions of or related to Christ’s crucifixion.

Joyce Hill’s collages include a wide variety of materials and items—crumpled coupons of sheet metal, hardware, painted matter, printed matter—around a recessed portion usually containing a photo or other graphic item ostensibly related to the title or subject of the piece. Several of these are on Ani DiFranco songs. Joyce Hill appears to be a big fan.

Evette Slaughter’s works are as much paintings as collages, abstract, with substantial color blocks and occasional add-in fragments of text, and in one case a portion of city map, for a work called Urban Landscape.

Daniel Rodgers’s works employ fragmented and distressed photos, and the surfaces of his works are abraded so that it’s hard to tell just what the surface is made of or just what’s been done to it. Several of the works include partial views of Japan’s Mount Fuji.

This exhibit continues through the end of the month.