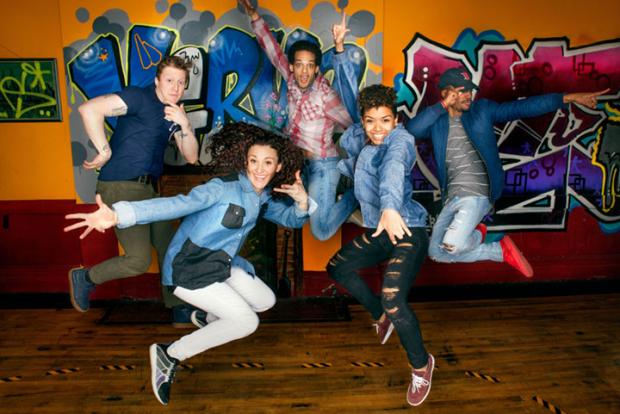 Verve teachers and members of the Differential Flava Crew. Photo by Kelsey Schork Studios.
by
Vanessa Oswald
/ May. 10, 2017 12am EST

As you walk through the front doors of Verve Dance Studio, infectious breakbeats enter your ears and travel through your veins. A positive flow of energy reverberates throughout your body, making even the shyest individuals feel that intrinsic need to move. As you walk up the tall staircase, the music gradually gets louder, until you’re hit with it full-blown. At the entrance to the dance floor, you’re given a warm welcome by all the friendly faces. The vibrant yellow walls are plastered with splashes of colorful, eye-catching graffiti. B-boys stretch in preparation, in hopes of landing their impressive power moves, and others freestyle to amp up before Battle at Buffalo gets underway. Children are laughing, playing, attempting to imitate the older dancers, expressing themselves in a variety of ways as they react to the upbeat music. Families and friends are smiling in all directions, bonding and creating lasting memories as they enjoy the fun, relaxed, and accepting atmosphere Verve offers.

Hip-hop culture is alive and well in the city of Buffalo in part due to Verve Dance Studio’s presence. This is the type of place Buffalo needs. And, after giving our city entertainment, education, and unconditional love over the years, Verve needs us to reciprocate and throw some of that love back. After more than a decade of providing a safe and family-friendly space for the community to learn about the art of hip-hop, the studio is being forced to vacate their home at 910 Main Street.

In September 2005, owners Shane “Depree” Fry and Heather Russell opened the space with the intention of serving as a community center to educate the youth and Buffalo community as a whole about the four elements of hip-hop: b-boying, DJing, MCing, and graffiti. They offer this education through an array of hip-hop dance classes for children and adults, along with occasional introductory DJ, MCing, and graffiti classes for children.

The original inspiration for Verve came from the Northwest Buffalo Community Center located in Black Rock at 155 Lawn Avenue, which provides valuable services, such as after-school programs for children, youth and senior programming, medical and dental services, education, crime victim assistance, and daycare.

“I used to go there when I was a kid and always liked the environment,” Fry said. “I always wanted to have a space where people could come and learn, and have fun and be safe.”

Fry’s dance group, Differential Flava Crew, and his love of hip-hop culture also contributed to him wanting to open his own community center. His journey with hip-hop started as a young kid.

“I was listening to hip-hop before 10 through my cousin and a friend’s older brother,” Fry said. “Run DMC and LL Cool J’s first album were some of the first rap I recall hearing.”

He also remembers religiously watching BET’s Rap City, especially when Chris Thomas, otherwise known as “The Mayor,” was the host, and claims to have seen every rap music video released from 1989 to 2005.

In 1999, Fry began to learn b-boying from original members of Differential Flava Crew, which included dancers Dank One, Infinite, Two Toast, and Ness. He also learned a lot from going to jams and watching breaking videos on VHS.

Fry began teaching b-boying in 2001 at Clark Academy of Performing Arts. He landed the job after stepping in for the hip-hop teacher, who hadn’t shown up one day, as he led a class of 20 students.

When Fry was able to open the doors to his own space, this made the hip-hop scene more accessible to those who were looking for a place to practice and explore their art and were already part of what was then a smaller scene. It also introduced hip-hop culture, and the beneficial community reinforcement behind it, to those in Buffalo who weren’t familiar with it. The space allowed people from all different backgrounds to come together and learn from each other.

Fry was recently recognized for his contributions to the community and impact on Buffalo youth through dance education, as he was chosen as a 2016 Business First 40 Under 40 honoree.

The monthly dance jam Battle at Buffalo (happening every last Saturday of the month), an event where dancers compete for cash prizes, was also created in 2006 and is currently the longest-running B-Boy/All-Styles event in the country. Everyone in the community is welcome to attend the jam.

Verve is unlike any other dance studio or community center in Buffalo because of the unique focus they place on promoting respect, unity, and diversity within their classes and events. They also teach children the history of hip-hop as an American art form and lead discussions on social and cultural issues.

“One of the things that makes Verve special is how intentional they were from the start to welcome everyone,” said Stacy VanBlarcom, who is a dancer and teacher at Verve. She also serves as the studio’s Communications Manager and is part of the Differential Flava Crew. “Because of that you have a supportive space where you can express yourself as an individual.”

While the kids taking class here may not have a traditional recital, they get the chance to show off their moves at the Kids Showcase, which takes place every few months during Battle at Buffalo.

“We offer more classes and different events and programs, and there’s been a constant growth in students,” Fry said. “Verve has also contributed to cultivating the b-boying and hip-hop dance scene in Buffalo, and has also brought dancers from nearby cities like Rochester and Syracuse, and from as far away as European countries with our monthly jam.”

Verve serves an estimated 500 to 1,000 kids and young adults per month through their studio classes, events, and school and community programming. Their students also include at-risk and special needs youth.

According to the nonprofit organization Americans For the Arts, “students who participate in the arts, both in school and after school, demonstrate improved academic performance and lower dropout rates.” The organization also points out that “low-income students who are highly engaged in the arts are more than twice as likely as their peers with low arts involvement to earn a Bachelor’s degree.”

Starting in 2011, the Verve family began hosting the daylong hip-hop festival, Battle at Buffalo: Under the Lights, in conjunction with New Era. This annual summer event features dancers performing on an outdoor stage, guest DJs, MCs, and artists of all kinds coming together to promote and preserve the spirit of hip-hop culture among a wide range of people.

“That’s been another way for the larger Buffalo and Western New York community to experience hip-hop culture, and has introduced a lot of national and even international artists to our city,” Fry said.

Despite the studio having to move to a different location, due to the owner of the building expanding their business, VanBlarcom says the studio will survive and continue to inspire every individual that walks through its doors, no matter where it ends up.

“The same welcoming energy will continue to be present wherever Verve is located,” VanBlarcom said. “We see this as an opportunity to expand upon what we’re doing now and continue to provide valuable programs, dance and arts education to young people in our city.”

When the studio asked the community for their support, VanBlarcom says the response was not surprising.

“We already knew the community around the studio was amazing,” VanBlarcom said. “People have been reaching out to us, sharing what Verve means to them and the positive impact it’s had on their lives, and we are grateful for their support.”

Verve will be hosting their fundraiser, “Verve Dance Studio Funkraiser,” on Saturday, June 10 at 7pm. There will be lots of music, including a special DJ set from Shane & Tone, along with a ton of dancing and other fun activities.

In addition to the fundraising event, there are two fundraising campaigns at gofundme.com/thenewVerve or vervedancestudio.com/the-new-verve for those who would like to donate to help Verve find a new home.