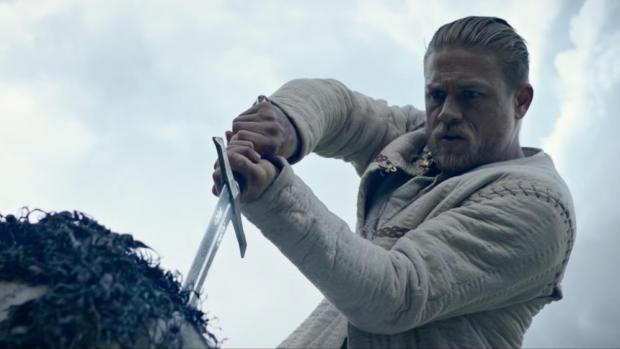 Oh, how Jackie Kennedy would probably hate Guy Ritchie’s King Arthur: Legend of the Sword. There are, to be sure, ample aesthetic and other grounds to disdain Ritchie’s hopped-up, hit-‘em-where-it-hurts take on the old Arthurian legends, but President Kennedy’s widow had a special affinity for the stories. She manipulated them to promote a symbolic elevation of her assassinated husband’s violently abbreviated administration. That is, she importantly borrowed from Camelot, Lerner and Lowe’s popular musical-theater adaptation of T. H. White’s gently wry modern retelling of the legends assembled by Thomas Malory’s Le Morte d’Arthur in the late 15th century. Malory’s nationalistic work celebrated knightly virtue, religious quests, and the burdens of kingship while relating a tale of forbidden love. That’s a lot of perennially popular stuff. (Mrs. Kennedy’s fiercely committed and shrewd use of much of it to cast a glorifying light on her husband’s presidency is part of Pablo Larraine’s recent movie, Jackie.)

Ritchie’s slapdash, hammering version actually pays occasional lip service to the old stories, but he’s made such a hash of them that his use of them amounts to an insult. It takes awhile before King Arthur takes any recognizable shape. It abruptly and bewilderingly begins in the middle of a gargantuanly scaled battle scene, realized in grotesquely silly CGI imagery (fire-breathing, mammoth mastodon-like beasts sporting wings, for example).

The editor of this page, M. Faust, once observed that the trap in summarizing plots for readers is that it can make pictures sound more coherent and better than they are. Try to bear this in mind, now. As the movie continues, the King of Camelot, Uther Pendragon (Eric Bana), almost single-handedly repels the grossly fantastic attackers—who aren’t identified—wielding his magic sword Excalibur. But he’s forthwith murdered by his brother (Jude Law), who assumes the throne. (I think it’s his brother; I was having trouble keeping up.) Pendragon’s little son escapes and is raised in a brothel in a primitive early London, becomes Arthur (Charlie Hunnam), and is eventually discovered by the brutally dictatorial king, though not before he becomes the only Englishman who can pull the miraculously reappeared Excalibur from a stone. Arthur soon, if reluctantly, is leading rebels seeking to topple the tyrant. (Trust me: This movie is considerably harder to follow than this summary is.)

It’s not clear that Ritchie cares much about accessible storylines. He punches out jagged sequences of mini-scenes like he’s making a batteringly propulsive music video. Characters come and go with little or no identification. Even the big action set pieces are too uneven, resolved in confounding busyness and overwrought, freakish imagery. The dialogue is flippantly, if banally, anachronistic. There’s a kind of juvenile, steampunk anarchism at work.

A filmmaker like Ritchie thumbs his nose at efficient, involving storytelling; nor is he really interested in dramatic spectacle, unlike directors such as John Ford (in some of his Westerns) or David Lean in Lawrence of Arabia. He’s after impact, and he’ll happily batter his audiences into submission to get it.

King Arthur may just be another vulgar, ephemeral sign of our disruptive, times. Or it may be a disturbing indication of the shape of things to come, even if it is only another movie.