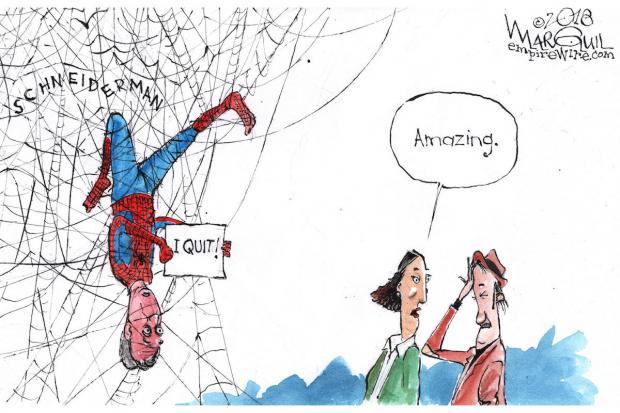 New York State Attorney General Eric Schneiderman has resigned after a blockbuster expose in The New Yorker published on Monday revealed four women’s credible accusations against the state’s top cop of abuse and harassment in several of his personal relationships. Schneiderman is a former state senator; he was elected attorney general in 2010 and re-elected in 2014. His resignation leaves the AG race wide open, and the state legislature will select an interim AG to serve out his term. It is a shocking fall for the man whose office prosecuted everything from the Steve Pigeon crew’s electoral racketeering to the Trump University fraud, and who has worked since Trump’s election to lead other attorneys general in countermanding the dismantling of environmental and other regulations. When The New Yorker first released its article, Schneiderman released an odd statement about “role playing,” but within hours submitted his resignation after Governor Andrew Cuomo, among many other, demanded it; there was no way forward through this, given the seriousness of these on-the-record allegations. It is right and good that we hold our most powerful people — and in the case of Schneiderman’s public acts, our best political actors — to high standards.

Erie County Child Protective Services got a much needed shot in the arm as the legislature approved a wage hike for workers. It’s hard to recruit and maintain talented social workers if the starting salary is only around $35,000 per year. The same can be said, however, of the county’s adoption and children’s services divisions, which did not see a commensurate pay increase despite facing similar problems of high staff turnover and low starting pay to work large caseloads when compared with other counties. Erie County needs to take this work seriously and recognize the difficulty and sensitivity of these jobs with higher wages.

When the smoke has cleared over Russ Brandon’s resignation [*cough, dismissal*] of his position managing the Bills and Sabres, Kim Pegula appears to have ascended into those duties. It’s far too early to tell if she’ll do well in this role, but we don’t want to sell her short of being capable of running the business and community engagement side of One Buffalo. In a city that has a poor track record of developing leadership roles for women, it feels good that Pegula immediately becomes one of a tiny group of high-ranking sports executives. Here’s to more of that.

The Diocese of Buffalo—again. There seems to be no end to the horrors of this story. We hope it’s incompetence and not outright obfuscation by Bishop Malone and his staff at this point. They’ve tried to save face and appear to be transparent about sexually abusive priests who prey on children, but every such effort is met with reporting that appears to prove otherwise. We don’t know how local Catholics can continue to have confidence in Bishop Malone. Church leadership in New York has spent nearly $2 million in recent years on lobbyists to kill proposed legislation that would allow a one-year window for victims to pursue justice. It boggles the mind. Kudos to Matthew Spina and Jay Tokasz of the Buffalo News and to Charlie Specht of WKBW for their reporting on this story.

MOΛΩN ΛABE is the name of a new takeout cafe, run by the good folks of Vasilis restaurants and soon to open at the corner of Main and Ferry streets, in the building redeveloped by Republican developer Nick Sinatra. That Sinatra is a Republican is relevant only because the phrase “molon labe,” meaning “come and take them,” is a widely used slogan of defiance adopted by the sort of Second Amendment conspiracy hounds who believe the government is poised to raid their houses and confiscate their guns. It it likely that the owners of Vasilis thought the Greek phrase, uttered by the Spartan hero Leonidas to the invading Persians when they asked him to lay down his arms, was merely a clever name for a Greek takeout joint. The politically active Republican Sinatra should certainly have known better.