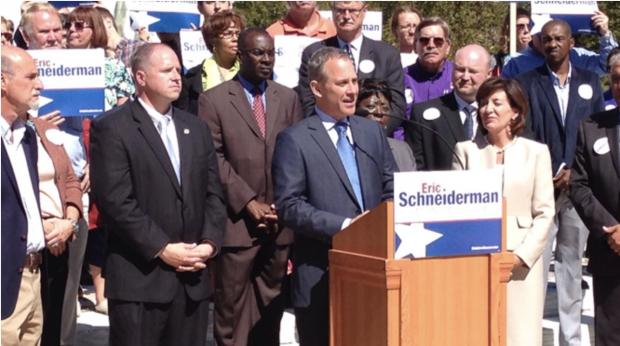 Attorney General Eric Schneiderman will resign today after a blockbuster expose in the New Yorker revealed four women’s credible accusations against the state’s top cop of abuse and harassment in several of his personal relationships. Schneiderman is a former state Senator and was elected Attorney General in 2010, and re-elected in 2014. His resignation leaves the AG race wide open, and the legislature will select an interim AG to serve out his term.

It is a shocking fall for the man whose office prosecuted everything from the Steve Pigeon crew’s electoral racketeering to the Trump University fraud, and who has worked since Trump’s election to lead other Attorneys General in countermanding the dismantling of environmental and other regulations.

When the New Yorker first released its article, Schneiderman released an odd statement about “role playing”, but within hours submitted his resignation after, e.g., Governor Cuomo demanded it; there was no way forward through this, given the seriousness of these on-the-record allegations.

It is right and good that we hold our most powerful people — and in the case of Schneiderman’s public acts, our best political actors — to high standards.