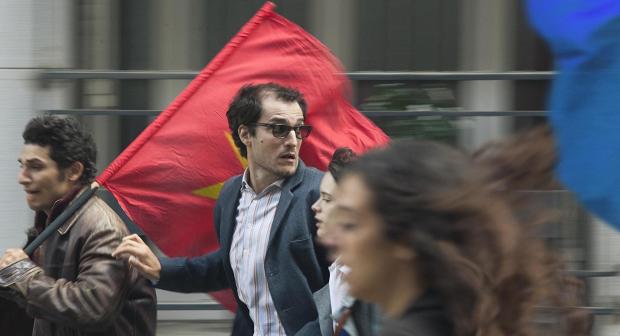 Jean-Luc Godard is one of the most important filmmakers of the last 60 years of cinema, but you’d never know that from the misconceived and tedious Godard Mon Amour. The film, which opens Friday at the Dipson Amherst, is a curious mix of biography and homage that slavishly copies Godard’s most famous visual innovations while depicting him as a barely tolerable grouch of uncertain talent.

Director Michel Hazanavicius swept the Oscars with his last film, The Artist (2011), a recreation of the visual style of classic silent cinema. His goal here seems to be to do the same thing with the oeuvre of Godard, and he’s generally on target in recreating Uncle Jean’s primary colored production design, his groundbreaking editing, smooth camerawork, and inventory of visual effects (from oblique framing to using negative images for certain scenes). Hazanavicius even recreates moments from many of Godard’s best-known films—Contempt, Alphaville, Band of Outsiders, and La Chinoise.

But instead of using the Old Master’s techniques in a new context, Hazanavicius chose to adapt a fictionalized memoir by Godard’s ex-wife, actress Anne Wiazemsky (who died last October). The book hasn’t been translated into English, so we can only speculate if it contains the same harsh portraits of Godard and Wiazemsky found in this film.

Hazanavicius focuses on the period in which Godard married Wiazemsky and became a militant Marxist, cutting all ties with the mainstream French film industry. In this version of events, every character is unlikable, even Wiazemsky, who is depicted as a shallow child of privilege, indulging in protest and studying Leftist politics as part of a late 1960s “trend.”

There are several ways in which Hazanavicius tailors his material to make it so spectacularly lackluster. Among them is the fact that Godard was constantly filming features during this period (as he continues to do to this day, at the age of 87). But Godard Mon Amourmakes it seem as if his Marxist period was a “retirement” of sorts, where his only encounters with a film camera were to shoot footage of protests.

Focusing on Godard and Wiazemsky’s relationship to the exclusion of all else, Hazanavicius ignores or downplays all kinds of major events that occurred in the months covered here, including the very famous incident in which protests led by Godard and fellow New Wave filmmaker Francois Truffaut resulted in the closing of the 1968 Cannes Film Festival. Instead we endure sequences in which Godard is doctrinaire in his pronouncements and wonder why Wiazemsky ever fell for such an old crank.

The performers do their best with what they’re given. Louis Garrel (The Dreamers) has been made up to look like Godard in 1968 but exchanges JLG’s real-life, moderate speech impediment for a sibilant Sylvester the Cat slur throughout. Stacy Martin (Nymphomaniac) tries to breathe life into the pouty, long-haired Wiazemsky while looking nothing like her—her makeup, costuming and perky bob make her look more like other Godard actresses (Chantal Goya from Masculin-Feminin and his first wife and muse Anna Karina).

Godard fans are most likely to appreciate what’s on display here, but they would be better served watching or rewatching any of his classic films than going to see Godard Mon Amour.