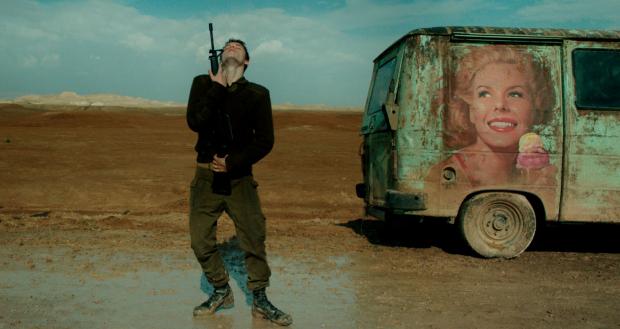 After it swept the Ophirs, Israel’s equivalent of the Academy Awards, Foxtrot seemed to be a shoo-in for a Oscar nomination for Best Foreign Language films. That it didn’t get one surprised many observers, some of whom wonder if the vituperative campaign that Israel’s Minister of Culture has been leading against the film (despite not having seen it) had anything to do with the snub.

It’s a shame because an Oscar nomination, and likely a win had it been in the running, would have brought a wider audience to what is the best film I’ve seen so far this year, by a wide margin. Surreal, mysterious, and emotionally gripping, Foxtrot is a masterful piece of cinema.

The film unfolds in three segments that are, at first, uncertainly connected. The first begins in the spacious and spare apartment of the Feldmans, Michael (Lior Ashkenazi) and Daphna (Sarah Adler). When she answers the door one day to see soldiers, she faints dead away: As the mother of a son in the army, she knows they can only be bringing the worst possible news.

For the bulk of this part of the film we study Michael, who is nearly paralyzed by grief and rage. A star of the Israeli cinema, Ashkenazi fits the definition of a movie star: Even when he’s not doing anything you can’t take your eyes off him, though of course the character’s stillness doesn’t mean the actor isn’t at work. In their performance of a task they have clearly been trained in, dealing with grieving parents, the soldiers (and the camera) treat him like a caged animal. They seek not so much to help him as to contain him.

Just when we have settled in for a tale of a father’s crusade for justice, the second part of this triptych takes us somewhere else entirely, to observe young Jonathan Feldman (Yonathan Shiray) at the desert post where he is stationed with three other soldiers. It starts with a laugh we weren’t expecting, followed by a dance sequence we were expecting even less. By the time one soldier begins to tell the others a story about the family Bible that has been handed down through the generations, we know better than to expect the anecdote to go where stories like that usually do.

Like a chamber version of Catch-22, the absurdity of this part of the movie reframes what came before it. Drafted to serve their country, these young men spend days of sheer pointlessness, living in a water tank that is literally falling over. Their only task is to check the identification papers of Palestinians who drive on the desert road where they are perched.

There is a tragic event that seems to be the source of the Israeli minister’s contempt for the film, demonstrating that she has entirely missed the point of the film. (That can happen when your tirades are based only on second-hand information.) Writer-director Samuel Maoz, whose best known film, Lebanon (2009), takes place entirely inside an army tank, is not attacking the military. He is examining the nature of contemporary Israeli culture, caught between an imposing past and an impossible present, asking how his countrymen arrived at where they are. The final part of the film, which initially seems to be little more than an epilogue, returns to Michael with a bitter irony out of a Greek tragedy, suitable to a film named after a dance that always takes the dancers right back to where they started from. It opens Friday at the Dipson Eastern Hills Mall Cinema.

Now playing at the North Park, A Bag of Marbles is the second adaptation of the memoir by Joseph Joffo about his experiences as a boy in France during the German occupation. (The first was made in 1975 by Jacques Doillon, who in 1996 had an international hit with Ponette.) The youngest of four sons of a Jewish barber (Patrick Bruel), his carefree life is disrupted when their father decides that they must flee Paris for the relative safety of Nice. And because it is too dangerous for them to travel as a family, they must separate, with Joseph accompanying his older brother Maurice. Joffo’s story recalls Hope and Glory in that it presents the perspective of a young boy who came through the war relatively unscarred; there’s always room for a story of this time that isn’t too horrifying to bear. But for the insight it offers into survival in this worst of all possible worlds, it lacks dramatic impact; the story is episodic, apparently constrained by a low budget, and doesn’t really engage us until two events at the conclusion that show what Quebec director Christian Duguay might have been able to do with a bigger budget and a tighter script.