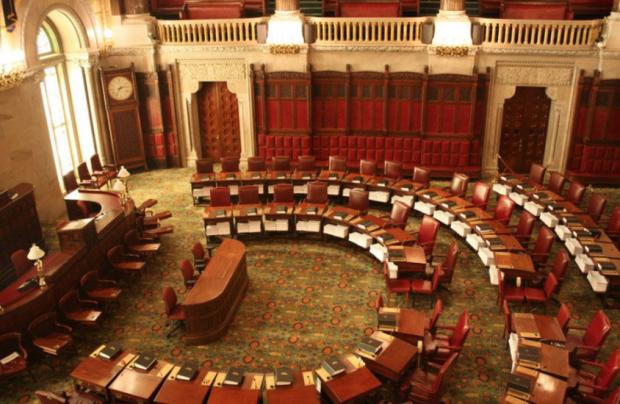 “I don’t think we can go past Monday,” freshman senator Rob Ortt told City & State Thursday afternoon. “I think we need to address this, hopefully sooner.”

Ortt, has been making waves by declaring he would introduce a measure calling for the ouster of Skelos when session resumes Monday. He was one of the first members of the conference to ask Skelos to step down in the wake of his arrest, releasing a statement Wednesday evening calling on the majority leader to relinquish his position, adding that he would be willing to submit a resolution of his own if a change did not appear imminent.

“Senator Skelos has done a lot of good work for New York State,” Ortt said in the statement. “But one thing I learned fighting in Afghanistan is that being a leader means doing what’s best for the people you serve, not yourself, even if it’s painful or unpopular.”

In an attempt to push back on the drumbeat, a press release with the names of 16 members supporting Skelos came out Wednesday evening. Western New York Republican senators Patrick Gallivan and Michael Ranzenhofer—who both say they still tentatively supporting the leader—were not on the list.

Sen. Patrick Gallivan told City & State both Wednesday and Thursday that he stands by the conference’s decision to keep Skelos as leader, but also said he would be open to further discussions regarding a leadership change.

“I don’t decide who the leader is or who isn’t,” Gallivan said. “We have to do it collectively.”

However, Gallivan acknowledged that the situation is “evolving,” saying he expects decisions to be made quickly, one way or the other, when lawmakers return to the capital next week.

“I am confident that we’ll address the leadership issue Monday,” Gallivan said.

As for his name being left off the letter with Senators standing with Skelos, Gallivan was coy.

“You can interpret it how you want,” Gallivan said. “The letter’s the letter.”

What happens on Monday is still to be determined. Ortt said he has not had any discussions with Independent Democratic Conference Leader Jeff Klein or members of the Democratic Conference about forming alliances to ensure that they can out vote the remaining Skelos supporters and force his ouster. The Senator admitted he is not certain how his resolution would play out procedurally.

“I can’t speak to that because I don’t know how that goes, having been there for four months,” Ortt said. “My focus right now is on my position and I’m urging my colleagues, and you’re seeing more come out, to do the right thing, for the conference, for constituents, and try to put this distraction behind us.”

Ortt said that the slow trickle of Republicans calling for Skelos to step down may gain momentum as lawmakers face constituents over the weekend.

Adding pressure to Skelos has been the calls from several prominent Republicans across the state. One of them is Erie County Republican Committee Chairman Nick Langworthy who says people in Western New York are “outraged” by the charges against Skelos.

“As the members hear from their constituents as they’re home this weekend traveling their districts the sentiment is going to be loud and clear that it’s time to turn the page on this chapter of leadership,” Langworthy said.

Earlier this year, former Assembly Speaker Sheldon Silver similarly tried to hold onto power after being indicted, but slowly lost support as time passed and was forced from his position a week after his arrest—and replaced by Carl Heastie one week later.

Langworthy said he believes the same thing is happening with Skelos’ arrest.

“Sheldon Silver thought he was going to maintain power for about a week too,” Langworthy said. “Then reality set in when members went home to their districts. When they came back it was a different situation.”

Langworthy said that the Republican conference can’t stand still on this and expect constituents to take them seriously.

“The reality is Republicans don’t want our brand name and our party tarnished with this sort of corruption,” Langworthy said. “(Skelos is) entitled to his day in court and I’m not suggesting that he resign his seat in the Senate, but he has no business leading the senate majority and to be a perceived leader of the Republican party while he’s accused of these crimes. He needs to do what’s right for taxpayers of the state, for the senate and for the Republican Party and step down immediately.”

Justin Sondel is a staff reporter for City & State and appears courtesy of a content-sharing agreement with The Public.