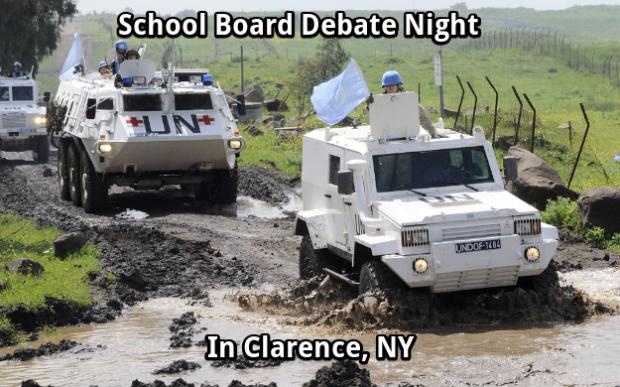 Are you now, or have you ever been, a member of a PTO?

Most parents even of schoolkids pay scant attention to their local Parent-Teacher Organizations. They are oftentimes 501c3 non-profits that fundraise to pay for library books, school supplies, and extras that the regular school budget won’t — or can’t — accommodate. They do this through tax-deductible donations earned through dances, activity nights, collection of boxtops and store receipts, and through the sale of books, wreaths, coupon books, gift cards, and other small items. One random local PTO’s mission: “Our organization is committed to improve, enhance, and assist the educational and social processes in our school.”

PTOs are run by small groups of selfless and involved parents. As a 501c3, PTOs can engage in issue advocacy, but cannot endorse, support, or fund any individual political or school candidacies. A PTO can ask people to vote yes for a school budget, but cannot recommend votes for particular board candidates. Likewise, a PTO (or any 501c3) can host a candidate forum, so long as all candidates are invited and the process is objectively fair; questions or time are not biased against any one candidate. There is no requirement that the individual PTO members be impartial — merely that the process is fair and that the PTO hasn’t made an express endorsement. We’re not picking a jury here.

A few weeks ago, the Clarence High School PTO copied & pasted — shared — to Facebook something from a local pro-school advocacy group that contained an express endorsement of two candidates. It was a mistake, and it was deleted when brought to their attention. That PTO wasn’t necessarily endorsing the Keep Clarence Schools Great statement — merely sharing it. You know — the whole “RT ≠ Endorsement” thing on Twitter. Nevertheless, it raised the appearance of impartiality in the board races and should likely not have been done.

Next Tuesday, there will be a candidate forum hosted and moderated by members of two different, elementary school PTOs. The High School PTO is not at all involved. The entire program is organized and hosted by the school district, and the program was going to go out of its way to be fair to all four board candidates — two pro-school, two anti-school running for two seats. It bears repeating that neither of the elementary school PTOs posted anything anywhere that could be construed as endorsing any candidate for school board.

One candidate for the board, Joe Lombardo, Jr., pounced. He filed this grievance to the district office:

The PTO has shown that it is a biased group unable to equitably moderate this forum. They have publicly endorsed and opposed candidates on their Facebook page as seen in the attached photo. This creates and unfair and an unreasonable situation for myself and Jacob, especially when the PTO is creating its own questions. In addition, their endorsements and opposition of candidates violates 501c(3) law. I have advised the Erie County District Attorney’s Office of this matter. Based on the above points, I herby file a grievance in order to seek another moderator who can prove to be unbiased. Perhaps we can get a moderating panel from the Erie County Chapter of the League of Woman Voters or a chapter from a surrounding town. I feel their performance in the past has been excellent.

We need to examine this point by point.

The PTO has shown that it is a biased group unable to equitably moderate this forum.

There exist six PTOs in the town district — one for each school. None of them are affiliated with any of the others, except insofar as each is a “PTO”. Two of the elementary PTOs were to moderate the forum. The High School PTO, which Lombardo believes to be “a biased group” was not slated to be involved with the forum in any way. So, although arguably the HS PTO may have shown “bias”, the elementary PTOs hosting the forum did no such thing.

They have publicly endorsed and opposed candidates on their Facebook page as seen in the attached photo.

“They”? Which “They? One PTO re-posted the text from another group, and clearly labeled it as such. It was a mistake, but ultimately harmless. Note Lombardo’s use of the singular number in his first sentence, and switch to plural in the second. Are all local PTOs to be held accountable for the actions of one? Or does he think there’s only one PTO? Questions, questions.

This creates and unfair and an unreasonable situation for myself and [fellow anti-school candidate] Jacob [Kerksiek], especially when the PTO is creating its own questions.

All <sic> by the way. The offending High School PTO was not “creating” any questions. It wasn’t even involved. Again, two different, elementary school PTOs were involved in drafting questions in consultation with the district office. There were safeguards put in place to ensure that the questions were uncontroversial and generic; questions that any board candidate could expect and should be able to answer. But if the High School PTO’s mistake ruined it for the two elementary school PTOs, why not explain how? Note the singular number for “the PTO”, and watch how the next sentence takes a simple matter and turns it up to eleven:

In addition, their endorsements and opposition of candidates violates 501c(3) law. I have advised the Erie County District Attorney’s Office of this matter.

Yes, if a PTO endorsed or opposed a candidate, it would be violative of 501c3. But this instance was, at worst, an accidental re-printing of another group’s endorsement. The offending Facebook post was clearly marked as that of another group. It’s not the end of the world, and it won’t threaten the High School PTO’s 501c3 status.

It especially won’t be threatened because the Erie County DA prosecutes state crimes, not de minimis violations of federal tax statutes. But note the switch back to the plural number — are all PTOs to blame? Just one? Guilt by association by virtue of their shared use of the initials PTO?

And what is to be gained here? The DA isn’t going to arrest or prosecute the PTO. I suppose the IRS could investigate, but what’s it going to do? Revoke the high school’s non-profit status? That might happen if the PTO had raised money for candidates, but it didn’t, so cui bono? If the HS PTO can’t fundraise as easily because donations aren’t tax-deductible, that hurts the students at the high school — no more, no less. We have here the jaw-dropping, extraordinary spectacle of a putative school board member seeking to indirectly do harm to schoolkids.

Based on the above points, I herby file a grievance in order to seek another moderator who can prove to be unbiased.

Who will conduct the voir dire? Seriously, though, as a practical matter the elementary school PTOs did nothing wrong, so the claims of “bias” are ridiculous.

Perhaps we can get a moderating panel from the Erie County Chapter of the League of Woman Voters or a chapter from a surrounding town. I feel their performance in the past has been excellent.

The League of Women Voters (note the spelling) doesn’t have a Clarence chapter anymore, and has stopped moderating candidate forums for school or town elections. Indeed, the last candidate forum was hosted by the same elementary school PTOs as this year, and no one had a peep of a complaint about it. One would expect someone so interested in the schools that he would run to be its trustee to have attended it, and been aware of that. One would also expect a putative trustee to know that there exist more than one PTO, and that the misdeeds of one do not taint the others.

You know what the PTO moderators are there to do? To stop this sort of childish behavior:

They sat in the front row on candidates night… They had either the Bee ad with our pictures and write ups, or the district budget paper… I think it was the Bee though… They had Joe [DiPasquale] and me crossed out (our pictures that were in the paper with big red x’s)…when we talked especially when I talked Danica would stick out her tongue, Joe made faces… all rolled their eyes and shook their heads whenever we spoke and held up the paper with our pictures crossed out. I should have ignored it but even when I wasn’t speaking they just stared at me and instead of me looking away I stared back and got into a staring contest. Mind you I just had been diagnosed with whooping cough and had a 103 fever. So it was an all out perfect night. The administrators were sitting about 7 rows back and never saw this going on.

The behavior being described is that of Joe Lombardo, Jr., his girlfriend, and his father. That’s right; the guy complaining about the propriety of two PTOs handling a candidate forum because of the behavior of a third PTO, in 2013 himself engaged in fundamentally infantile taunting behavior during a school board candidate forum, cruelly targeting two people whom he didn’t like. The level of hypocritical butthurt is almost as high as the level of obnoxiousness.

You would think that the district would inform this candidate that he has his facts wrong, and invite him to show up or not — whatever. Instead, they are bending to his demands and the questions that the elementary school PTOs had compiled will be thrown out. In their stead, audience members will be submitting their own questions via index card, and will be randomly selected by the same moderators who were originally scheduled to oversee the proceedings.

Here is what Lombardo told the Clarence Bee:

“The PTO has no business putting their hands in it,” he said. “I am still trying to get a commitment from the league to do it, but time is an issue.  For future forums they need to find an unbiased moderator.”

The PTO has no business putting their hands in “it”; “it” being the candidate forum that the PTO hosts and sponsors. If Lombardo can’t take the heat and perceives PTOs to be his adversary, perhaps he shouldn’t be running for school board.

UPDATE: He still doesn’t get it. Two PTOs are sponsoring and running this PTO candidate forum. Perhaps if the UN brought in peacekeepers, that would placate this candidate.