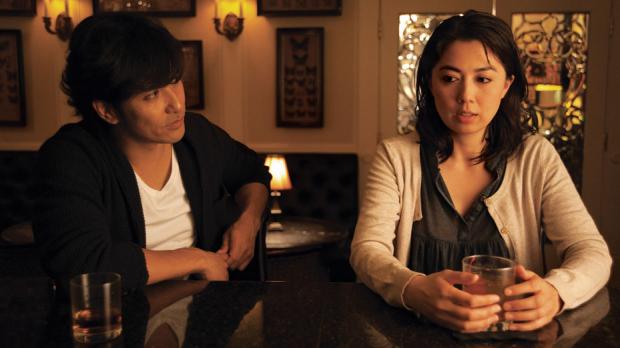 Is there any more misused movie term than “film noir”? Too often it is applied to any black-and-white crime film, as if it were nothing but a “look.” And to be fair, even those who have studied the style for years can’t agree on a definition without admitting that exceptions are plentiful. That’s not surprising when you remember that the term began with French film critics remarking on a tendency they saw in American films of the 1940s and 1950s: Only after the 1970s did filmmakers set out to create films noir.

The low-budget but surprisingly accomplished Man From Reno is clearly the work of a filmmaker who has studied and absorbed the noir style without either parodying it or copying it. I haven’t seen any of director Dave Boyle’s previous films, and this one is apparently a departure in style for him, but it makes me want to see more of what he’s done: With limited resources, he has produced something as skilled as the work of studio filmmakers of Hollywood’s golden era.

Set in the one city that is even more noirish than Los Angeles—San Francisco—Man From Reno centers on Aki Akahori (Ayako Fujitani), the writer of a popular mystery series about a Sherlockian Japanese detective. On an international book tour to promote her latest novel, she ditches her publicists in order to deal with some personal guilt.

At a hotel bar she meets a fellow Japanese (Kazuki Kitamura), a suave fellow who seduces her and then disappears. Fancying herself as good a detective as her fictional creation, Aki sets about discovering who this stranger was and what happened to him, opening up a hidden world of danger (think David Lynch).

A parallel story involves the efforts of Paul Del Moral (Pepe Serna, one of those character actors whose face you know but not his name), an aging sheriff in a town south of Frisco investigating a mystery involving another mysteriously disappeared Japanese man.

Smooth as silk but never self-satisfied in its accomplishments, Man From Reno is so solidly constructed that you can enjoy it even if you lose track of the plot at times. It feature a charismatic cast of American actors usually consigned to smaller roles and the two Japanese leads, stars in their native country. Boyle has an instinctive knack for composition and framing, and makes great use of the San Francisco locations and atmosphere. You can see it this weekend at the Screening Room in Williamsville.

Just about the opposite is true in every way for The D Train, a depressing comedy whose most user-friendly aspect is recycling one of the hoariest devices, the character who tells a lie to make himself seem like a big shot only to get stuck trying to maintain it. Jack Black stars as Dan, who despite having a decent job and a happy family is obsessed with his high school days when he was the class loser. He hasn’t entirely left that behind him: Despite having installed himself as the chairman of the committee to plan their 20th class reunion, no one else seems to like him.

When he sees a TV commercial starring Oliver, the guy in their class that everyone wanted to be, he concocts a plan: go to Los Angeles to persuade Oliver (James Marsden, channeling James Franco) to come to the reunion, which will inspire all the rest of his indifferent classmates to RSVP and make Dan the star of the event. (If this sounds like a halfassed plan, you’re right.)

The familiarity of this plot cliché, exacerbated by Black’s ability to play an unsympathetic character, gets thrown a curve at about the halfway point. Ethics forbid me from revealing it, but I can say that while it initially appears brave, it goes nowhere other than to make life even more uncomfortable for Dan.

The feature debut for the writing-directing team of Andrew Mogel and Jarrad Paul, The D Train seems to have been designed to impress the kind of Sundance audience that rewards intentions over accomplishment, though even the intention here is dubious. It’s too unpleasant to laugh at unless you’re particularly cruel, and it’s final message of “Just be yourself” rings as hollow as the sentiment on the inside of a greeting card chosen at random.