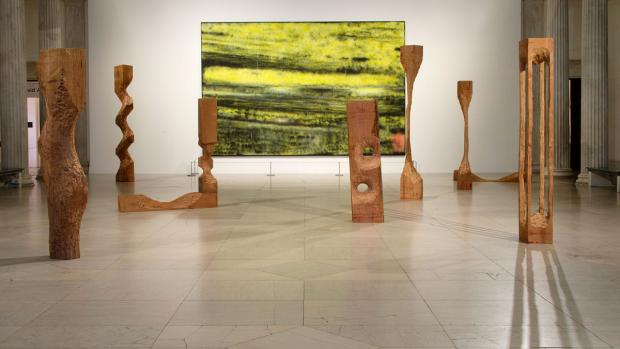 Maybe everybody knows this already, and, as often, I am the last to find out. But maybe there’s still someone who doesn’t—maybe several—and so it’s worth relating. The other day on my way home from a visit to the Albright-Knox, I was walking the path along the north shoreline of Hoyt Lake—a path I guess I hadn’t traversed in a while, or if I did, I wasn’t looking—and discovered to my delight there are beavers now in the lake. At least one, but probably a family. I remember Hoyt Lake when no self-respecting beaver would go near it, much less swim in it. But now there are unmistakable signs of beaver along that path: one sizable—nearly a foot in diameter—clearly beaver-felled tree, not yet removed to whatever further location the beaver might have had in mind. And other beaver-gnawed trees, some of which the Olmsted Conservancy people—so I’m not the first to discover the beavers—have encircled with wire fencing to prevent or discourage further beaver depredations. (There are a lot of scrub trees along the north side of the lake the Olmsted people would probably be just as happy if the beavers removed.)

The visit to the Albright-Knox was to see an exhibit to get to which I had to pass through the main sculpture court—the central room in the old building—where I had a quick look for the first time at the David Adamo sculptures, which I immediately decided I should try to write about. But not just then, not just yet. Huge chunks of raw wood, like segments of old barn beams, carved, chiseled—but chiseled isn’t quite the right concept, the right referent tool, which is not a chisel but what’s properly called a gouge, a rounded or scoop chisel—into minimalist, modernist forms for the most part, but some more ancient forms, too, or suggestive of ancient forms, such as architectural forms. Or occasionally or incidentally other sculptures by other artists. Terrific stuff, but just what to say about it? What about it made it terrific? Something I couldn’t quite make the connection to right then and there. Other, smaller, more enigmatic items—a ceramic facsimile of an orange peel remnant after somebody had peeled an orange and ate the innards, or sculptural half-eaten pear, or half-eaten corn on the cob, or painted aluminum what look like deflated balloons—leavings, like from the day after the party—are in the small sculpture gallery, behind the main sculpture court. I meant to come back and have more of a look at this stuff. Think about it.

Then on my way home, seeing the beaver evidence, it occurred to me. Adamo’s art is totally beaver. What the carving—gouging—looks like is beaver chew. Sculpturally revealing inner form previously concealed in the matrix raw form. But not only are beavers carvers, they are builders, constructors, the other kind of sculptor Adamo has recourse to in the small works, the small works, the ceramics and painted fashioned metal.

Moreover, what beavers are notable for is their leavings, the cone-form stumps and cone-end felled trees, distinctly beaver-gnawed with little gouge marks from their little gouge—not properly chisel—teeth. And copious chips and shavings if you get there reasonably soon after the beaver’s work session on a tree.

On the floor along the whole front wall of the main sculpture court is a kind of trash pile of wood chips and fragments, ostensibly wood removed in the carving process on the large sculptures.

Other items in the small sculpture gallery include a sculptural disembodied nose, in homage to Russian writer Nikolai Gogol, his short story, The Nose, and several rows of pyramid classic metronomes, in homage to Hungarian composer Györgi Ligeti, his Poème Symphonique, for one hundred metronomes counting tempi simultaneously at different speeds. These metronomes are silent, however, surely also in homage to John Cage, who composed silent music.

Further personal note (also involving beavers): Some eons ago, I lived in Vermont for several years, in a remote location—in the winter, when the trees were bare of foliage, you could see one other house, on a ridge more than a half-mile away—a few feet from a rushing stream or small river that supported—about a quarter-mile upstream—a family of beavers that had constructed a dam that provided them their own still-water swimming pool. Most evenings in the summer I would wander up to the beaver pool and sit on a large felled tree trunk the beavers had left conveniently on the shore for spectators—I think once they felled it, they found it was too big to do anything with—and watch for an hour or so as, their work done for the day, they came out and swam around leisurely in their pool, from time to time approaching the shore where I was sitting watching, but never coming ashore. We didn’t get that sociable. But I flatter myself to think, they were as interested in me as I was in them. And from time to time, beaver tail slap on the water, and disappear for a minute or so before resurfacing in another part of the pond. I plan to get over to Hoyt Lake some evenings this summer to try to observe the beavers. To catch their show.

The excellent David Adamo exhibit continues through May 17.