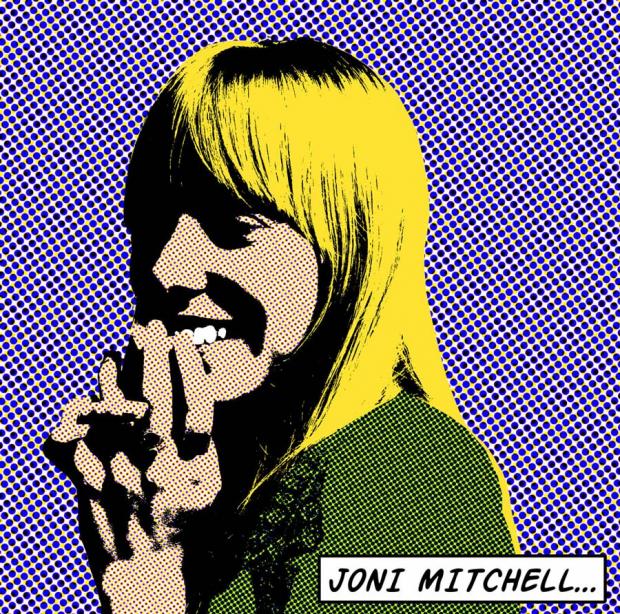 Wrestling with Joni Mitchell’s mortality might seem silly, but it feels like a huge, impending loss. The internet hype simultaneously heightens and cheapens the entire grieving process—and she hasn’t even died.

It’s not that she’s got so much great work ahead and so much more to do…I think most of us who hold Joni Mitchell in high regard also realize her best work is behind her and that she’s lived a very full life. Actually, as a lifelong smoker and a childhood polio survivor, she’s already beat the odds, having lived to 71.

The hard part to get over is the realization that, as a gay man, Joni Mitchell taught me a lot about articulating my feelings. Letting go of someone that (albeit unintentionally) shaped such a large aspect of my innermost thinking is what makes the loss seem colossal. And sharing that loss with lots of other fans online seems to water it down…to dilute its meaning. My grief. No sharing. Go away.

Back when I was living in Boston, a musician friend of mine put together a cabaret show called “Venus as a Boy,” paying tribute to the mostly female songwriters who had informed his emotional understanding. It was the first time that I’d given the idea much thought, but I soon realized that much of my thinking about relationships—romantic and otherwise—had been shaped by writers who were also women, Joni Mitchell chief among them.

A little history: The sound of Joni Mitchell’s voice became part of my world when I was three years old. Rooting through both my parents’ records and another relative’s collection in temporary storage at our house, my childhood record player scratched up an odd mix of kids storybook stuff, Bay Area bands, singer-songwriters, and AM radio 45s. Joni Mitchell became my favorite before Court and Spark had even come out.

From 1976’s Hejira onward, I always had the new Joni Mitchell record right when it was released. The music became significantly harder for a child to work with, but there was a discernible viewpoint at its center that was somehow tangible to me even at such a young age. I may not have grasped what the narratives were really about, but they meant something to me, and those meanings morphed as I grew up.

Some people need that chart with the different facial expressions to pinpoint how they feel. I seemed to devise a system based on Joni Mitchell’s vocal timbre, tunings, and her strum/finger patterns. Something about the honesty in her delivery instinctively let me know I could trust her, that her take on things was forever on-target and justified. She became my moral and emotional compass.

Now in my mid-40s, I can see how this isn’t ideal: outspoken and oversensitive—just what every gay man is looking for in a partner, right? But, though her writing reflects someone generally distrustful of mankind, Joni Mitchell looks for the good in people and searches for truth above all else—this has always made sense to me. There’s no getting around her bullshit barometer, however, which—once employed—often leaves you with the unsettling sensation that you’re looking through people (and, when you’re being dishonest, vice-versa). As an adult, I repeatedly tried to explain this “heightened level of sensitivity” in therapy sessions and ended up having to switch doctors. Go figure.

In middle school, I learned to hide my devotion. Joni was something to be enjoyed alone, and while elders seemed to get it, others in my age group were just brutal about the music’s perceived femininity. For those that found me out, it seemed to confirm longstanding suspicions about my sexuality. And admittedly, not without good reason: To witness the thought bubble floating above my head while listening to a Joni Mitchell album, I wasn’t the frustrated guy sitting across from her, hearing her out or trying to soothe her irritation. Nope, I was Joni, embellished cheekbones and all.

As I’ve gotten older, she’s become both a hobby and an indispensable part of my inner vocabulary…a bona fide frame of mind. But I still don’t often play her music in the company of other people. When Starbucks began giving her in-store play a number of years back, I was shocked. It’s an odd sensation, indeed, to hear something so intensely personal in a room full of strangers drinking coffee. It made me cringe.

But I cringed even harder when questionable information about her health leaked into the social media sphere last week. Particularly with regard to someone who has spent her life’s work striving for the truth, to have multiple rumors circulating about her level of deterioration seemed an unusually cruel injustice of media. Watching aging hippies dish out trite, new-age-y crap at one another to try and cope with the bad news just felt hollow to me. This is one time when I really wish I could turn the internet off for a little while, but I can’t walk away from my life just to avoid one storyline, and filtering is nearly impossible.

Frankly, I take zero comfort in knowing that others will be saddened by Joni Mitchell’s passing, whenever it happens. My relationship to her work is far too complicated and the emotional lessons gleaned from deciphering her viewpoint—and in this case, adopting it—are way too intense for an easy goodbye. Count me out of any teary candlelight vigils with choruses of “The Circle Game.” I will have to let go of her alone, the way I’ve worshipped her all these years—and the way I was forced, to some extent—to get to know her and her work. It’s selfish of me, I know, but it’s as if to say, “You didn’t celebrate her with me back then, so why should I have to share her now that you’ve changed your tune?”

The answer is, I don’t.  But I do find some solace in knowing that, beneath my visceral, in-the-moment reaction, there’s a lasting legacy that cannot be undone. It’s been said that “Joni Mitchell never lies,” and in the mind of this gay man, she never truly dies, either.