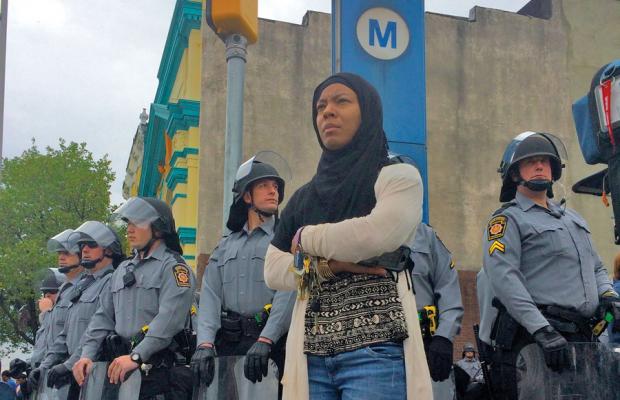 Forbes Magazine is to corporate capitalism what Sports Illustrated is to professional sports. It’s the “capitalist’s tool.” These are their words, not mine. It’s their branding moniker. The 98-year-old business and finance magazine is edited by Steve Forbes, the billionaire who twice ran for president on the platform of replacing our progressive income tax structure with a plutocracy-friendly “flat tax.” Understanding this background is important in order to understand the earth-shaking significance of a recent (4/28/15) Forbes editorial piece by contributor Dan Diamond, blaming the civil disorder in Baltimore on persistent social inequality “that puts people down—and keeps them down.”

For readers of this column, this seems like one of those “duh” moments. But I’m quoting Forbes, whose existence is grounded in celebrating a greed-driven empire of denial. That Forbes chose to run Diamond’s piece says a lot about the threat that wealth disparity poses to the corporate order. A curfew means no one is spending money at Applebee’s or driving to shopping malls. A burned CVS means no one is filling expensive prescriptions or buying tubs of ice cream or cases of Bud Light. In March, Forbes valued the Baltimore Orioles at $1 billion, with annual revenues of a quarter billion, but last week they played to an empty stadium.

The bottom line: Urban unrest is disruptive to the sacred free market that “the capitalist’s tool” exists to serve. The rich took too much of the pie; now there’s no pie.

The argument in Forbes is sound and simple: Poverty in sections of Baltimore is at a crisis level. This leads to hopelessness, despair, and disenfranchisement from the so-called “economic recovery” that is thrown in the face of poor and working-class people who have seen their own living conditions grow progressively more desperate and unstable. The problem in Baltimore, however, is far from unique.

The Forbes piece points out that “about a quarter of Baltimore residents live below the poverty line.” Here in Buffalo, recent Census data puts that number at more than 31 percent, with the number in Rochester well above 35 percent. For people under the age of 18 in Buffalo, that number soars to just over 50 percent. This last number is especially important since early accounts report that raging teens made up a large percent of those committing property damage in Baltimore, what the media terms “rioting.”

The Forbes story points out that the official unemployment rate in the impoverished area of Baltimore where most property damage broke out, is 19.1 percent. Official unemployment rates in the two poorest ZIP codes in Buffalo are just under 19 percent. While the actual rate of joblessness is much higher in both Buffalo and Baltimore, the official rate gives us a good benchmark for comparison. The two communities match up pretty well across a host of economic metrics. So, could we have been Baltimore last week?

To understand riots, let’s start with the more common white riot—a mass chaotic outbreak of white folks trashing property, attacking the police, etc. In many ways, these are the most frightening riots, since they often break out without precipitating incidents or causal factors. White crowds have been known to riot over sporting events, with wins seemingly more socially disruptive than losses. White youth riot when they’re happy, like at spring break, or just when they’re drunk en masse, such as at Keene, New Hampshire’s Pumpkin Festival last year. Historically these uprisings have gone beyond property crimes, however, giving our nation a horrific multi-century history of lynchings and white mob killings.

Black riots, by comparison, are more predictable. Historically, just about every major rageful uprising of black folks has been in reaction to a violent police incident, usually in the form of a seemingly racist violation of the human rights of some member of the black community. Social disparity and injustice certainly fuels the frustration that historically is a component in such events, but in black communities civil disturbances also seem to need a spark. If a city wants to maintain the peace and protect their big-box pharmacies, it needs to avoid putting a spark to the injustice of its social fabric.

Here in Buffalo, this means we need to look proactively at racial disparities in policing, not only in the city but in all of the political constructs we call suburbs. Omnipresent cell phone video cameras mean that racist business-as-usual can no longer be ignored by authorities or hidden from the general public. Communities that have historically been denied justice are both fed up and empowered by recent events. I’ve always said this abuse has to stop—because it’s wrong. That, apparently, never was enough of an argument to move the ball. Now we’re reminded it’s also bad for business. Maybe that will move the sociopaths among our civic leaders to action. Property values won’t go up if adjacent neighborhoods are burning down.

Independent police review boards and monitors, and zero tolerance for civil rights violations, starting today, will go a long way toward preventing civic unrest by preventing sparks. But this is only a Band-Aid. The only real long-term fix that will cut the fuel to social unrest is to address the growing gap between the rich and the poor, and to address the societal structures that game the system and maintain racial inequity across generations.

For all the feel good stories about Buffalo rising, it’s not. We’re following in the path of gilded cities that are divided into playgrounds for the comparatively wealthy and bottomless hellholes for the inter-generationally poor. From Buffalo’s hipster enclaves, things might look great. Holistically, however, we’re living in a tinderbox of inequality.

Photos by Justin Sirois. Sirois is a novelist and Baltimore City Paper columnist living in Baltimore. His books include Falcons on the Floor and So Say the Waiters.