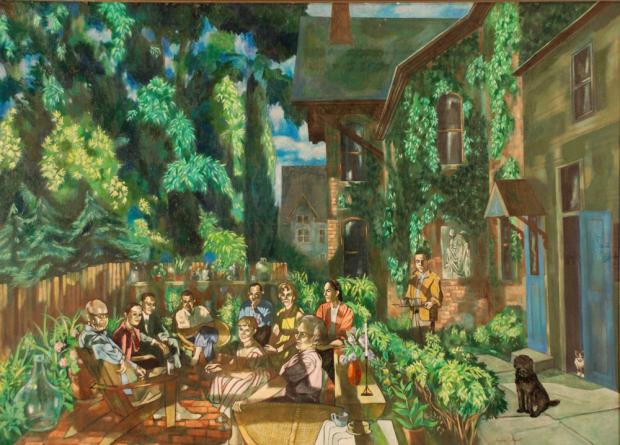 The Burchfield Penney exhibit The Birthday Party: A Community of Artists that kicks off the gallery’s 50th anniversary celebration this year doubles as a kind of institution raison d’être exhibit. Introductory wall copy quotes Nancy Jewett—one of the gallery’s founders, who passed away earlier this year—explaining how in the 1960s there was basically just the Albright-Knox, but there was so much local art activity and so many artists of quality in the area that it seemed impossible for the Albright-Knox to recognize them all. “It became important to think about something new, just for the artists of the region.”

The centerpiece painting of the show—by Virginia Cuthbert, from the late 1950s—depicts an actual birthday gathering of some royalty among local artists of the era, including gallery eponymous artist Charles Burchfield, Harriet Greif, Seymour Drumlevitch, Martha Visser’t Hooft, Virginia Tillou, Cuthbert in self-portrait, and her husband and fellow artist Philip Elliott. Works of these artists and Edward Millman—a Woodstock artist who must have been visiting at the time and is included in the birthday party and the painting—comprise the exhibit.

Excellent works by all concerned, but none surpassing area avant-gardiste doyenne Visser’t Hooft’s superb The Trojan Horse. In notably cubist forms and facets—the head of the animal—the long face—looks like a direct borrow from the later production however monumental Chicago Picasso—so maybe Picasso got the idea from Visser’t Hooft—while the Greek warriors in the belly of the animal are in triangle torso schematics precisely as Greek artists of the Archaic period represented human figures. The Archaic period was the pre-Classical period when the oral tradition Trojan War stories Iliad and Odyssey were committed to written form (how this was accomplished in a time before mechanical recording devices remains somewhat of a mystery). The Archaic period is also known—particularly when the topic is visual art—as the Geometric period, because of the triangle torso and similar schematics.

While from Burchfield, a romp through the seasons in two watercolors and three black and white lithographs, from end of winter mostly still snow-covered farm fields, to crows in March, to summer wildflowers, to autumn winds and a November tempest.

And from Greif, two abstract expressionist works, one called Hot Sky Over Naples Bay, in formless intense reds above, inchoate forms in earth tones below, and one called Brown Interior, a painting about painting. The sensuous experience of the application of paint—alternately with brush and blade—and the canvas as material and metaphor—synechdoche—the part for the whole.

Abstract expressionist works also from Drumlevitch, Greif’s marriage partner, including Misericordia with Tallit Stripes in thick impastos and dark shard forms, For Joseph, a Garden, an impressionist expressionist mass of black flowers against a red ground, and Illuminations for the 21st Century—Catalan and Petenera, a jumble of mostly hard-edge seemingly unrelated forms against a yellow ground. A somewhat pessimist futuristic vision, it seems, but not far off the mark as things have turned out.

In two vitrines, preliminary and published artwork for Henry Luce’s Fortune magazine by both Cuthbert and Millman. Cuthbert’s is for a cover illustration reiterating the behemoth character of modern industrialism, an actuality abstract depiction of an enormous piping system for an aluminum production facility. In a preliminary drawing she includes an insect-size human figure that is then eliminated from the finished work. Almost as if human reference was irrelevant. The Millman illustrations are for an article on gathering and cooking pine rosin to produce turpentine and resin (the article helpfully explains that rosin is the product of the tree, the raw material, and resin the refined product). In the Luce empire writers did not get by-lines, but Millman gets a credit line for his artwork.