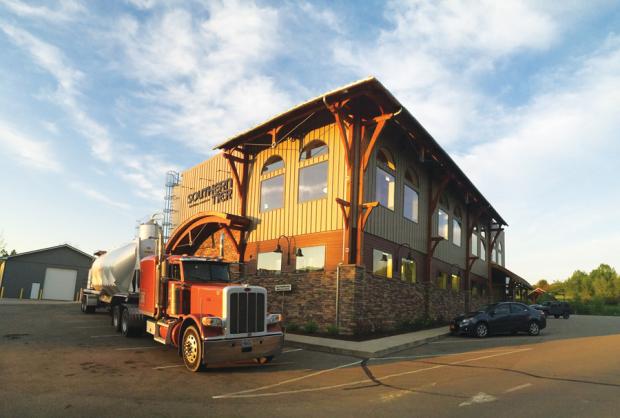 Photo courtesy of Southern Tier Brewing Company
by
Erik Wollschlager
/ May. 4, 2016 3am EST

Brewing in Western New York has grown exponentially in the last few years, but none have attained the notoriety that Southern Tier Brewing Company has. Best known nationally for their autumnal offering, Pumking, Souther Tier’s brewmasters are more than a stable of one-trick ponies. Their tantalizing recipes run the beer gamut, from rich stouts to bright IPAs to complex Belgians and everything in between.

Recently, Southern Tier entered into a partnership with Victory Brewing, a Pennsylvania brewery with a 20-year history. Together, the two Northeastern, mid-sized powerhouses have joined forces as Artisanal Brewing Ventures. This union marks an exciting time for brewing in WNY as it expands Southern Tier’s financial security, and also its capacity, making the two veterans of the craft beer market one of the country’s largest craft producing companies.

Nathan Arnone, Southern Tier’s brand manager, has been with the company for more than a decade. He’s been on board for all of the growth and innovation that the brewmasters at Southern Tier has produced, and he is excited about the opportunities this union will bring. “It came about when Sara and Phin DeMink, founders of Southern Tier Brewing Company] wanted to build this brand of like-minded breweries and so they’ve formed Artisanal Brewing Ventures, looking for other breweries that were about our size, and had similar values and determination. Victory was one of the first breweries that came to mind at the time. We’ve always admired their packaging and of course they have great beer. Another thing that made them a great fit is style—we have primarily ales at Southern Tier, but they’re on the other end of the spectrum. They do a lot of lagers, and they do them really well.”

“We’ve already been talking with Bill Covalesky [founder of Victory Brewing] about collaboration beers, and exchanging best practices, ideas, and the institutional knowledge that comes with two decades of brewing.”

“We’re also working on a shared distribution department. Expanding further into the Pittsburgh market is a big deal for us, and we’ve already set up a small office in North Carolina to push sales into the Southeastern states. We’re working toward establishing a small brewpub in Charlotte, which would mimic ours here in Lakewood.”

Teaming up with Victory is certainly big news for the region, and Western New York will soon be able to reap the benefits. Southern Tier’s fifth annual Public Day will be held in conjunction with American Craft Beer Week. On Sunday, May 15, Southern Tier will open their grounds from noon to 4pm, welcoming beer lovers to enjoy some of Southern Tier’s favorites, like Pumking, Choklat, Mokah, Hop Sun, Harvest, Grand Arbor; but also special beers that Southern Tier produces throughout the year. In addition to these selections, Victory Brewing will be bringing some beer of their own beer for attendees to sample. “We have no idea what they’re bringing,” Nathan admitted. “It will be a complete surprise—but a good one.”

In total, Southern Tier will offer 42 selections of their most popular beers, as well as their most funky. “We’ve been experimenting with sour beers, so we’ll have some of those available. One that we’re starting to brew on Monday is called Cherry Gose; it’s an imperial sour ale brewed with tart cherry juice from Singer Farm Naturals in Niagara County. It’s a crazy red color—absolutely gorgeous. We’ve got some test batches of a new IPA that we’re working on that hasn’t left the building yet. That’s really a really tasty beer brewed with a bunch of new hops.”

Southern Tier will also join the Buffalo Niagara Brewer’s Association in their Farm to Pint festival, which will be held at Hamburg Brewing Company on May 15 from noon to 8pm. They’ll be sending their Backburner—a barleywine brewed with maple syrup produced by a local sugar shack.

The future looks bright for Southern Tier as they head into the ABV era. This summer, beer lovers can expect several Southern Tier favorites to be available in cans. “We’ll have IPA and Tangier in 12-pack cans by the beginning of May, and in June, we’ll be releasing 2XIPA in 16-ounce cans. We’ll also be releasing a pilsner that we’ve been testing—it’s really great. I think it’s one of the best craft pilsners on the market.”

Is there anything in store for the fall? “We’re barrel-aging Pumking right now in rum barrels,” Nathan confessed (and the nation rejoiced).

The growth of Southern Tier and their commitment to quality has been a high water mark for brewing in Western New York. As the region’s brewers continue to move forward, creating innovative recipes and developing quality and consistency, it is fantastic for the area to have a giant’s shoulders to stand upon. A rising tide lifts all boats, and the fleet of Western New York’s brewers is certainly working diligently to meet the mark.