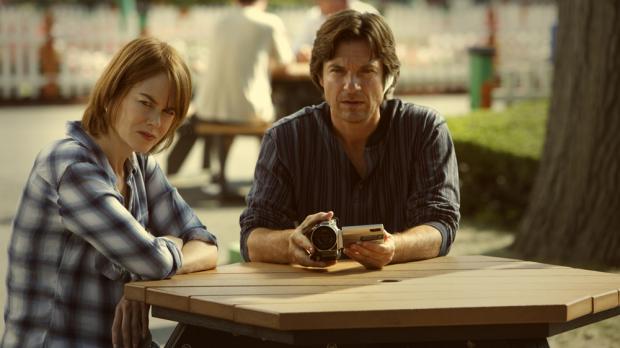 The first comic book movie of the summer season may be sucking all the air out of the room this week, but it’s not the only new movie in theaters. Two movies that, in very different ways, examine the nature of art and its relevance to everyday life open in local theaters this weekend.

Adapted from the novel by Kevin Wilson, The Family Fang finds a new take on what will probably sound like a played-out genre, the dysfunctional family drama. Annie Fang (Nicole Kidman) is an actress better known for her off-screen antics than her performances, and offers are starting to dry up. Her younger brother Baxter (Jason Bateman, who also directed) is a writer in a slump after an early success.

Each has both benefitted and suffered from childhoods in which they were famous as “Child A” and “Child B” in performance art pieces staged by their parents, Caleb and Camille Fang (Christopher Walken and Maryann Plunkett). It was Caleb’s goal to stage chaotic scenes in the everyday world as a way of shocking unwitting observers into questioning their lives. The film opens with one of these, an apparent bank robbery that includes the children at ages seven and five (or thereabouts).

Is this actually art, or merely acting up? One of the funniest scenes in the film is a debate by two art critics who argue just that point. Other staged events (recreated in flashback to the main action of the film) also add humor, though it’s not clear that the self-serious Caleb gets that aspect of it.

A brief, unintended family reunion is approached with different expectations by the siblings: Baxter just wants to forget their past, while Annie wants to deal with it. Caleb is disappointed that they chose to quit his projects, while his wife seems ambivalent. And when the two of them disappear in what may or may not be another stunt, the children are forced to confront their relationships with each other and their pasts.

While Bateman and Kidman are both too old for their parts (one would assume people dealing with these kinds of issues to be in their 20s or 30s), but are otherwise clearly involved with these characters. (It was Kidman who optioned the book to make it into a film.) The Fangs may be an odder family than most, but the damage they inflict is a matter of attitude: as Caleb tells them in one exasperated moment, “That’s what parents do.” Opening Friday at the Eastern Hills Cinema.

Aleksandr Sokurov is probably best known in this country for Russian Ark, his documentary about the enormous Hermitage museum in Saint Petersburg. So the news that he has made a film about the Louvre in Paris may lead to the expectation of something similar. Instead, Francofonia is a unique creation from a veteran filmmaker with such a grasp of his craft that he can range far afield in pursuit of his theme, the relationship of art to history. Sokurov had apparently unlimited access to the Louvre and its treasures, but instead of dwelling on any particular works he ruminates on its history, using a combination of historical footage, photographs and recreated scenes. The central part of this cinematic essay looks at the years when Paris was occupied by Germany during World War II. Nothing that “Museums don’t care what happens around them, as long as they’re let in peace,” he puts war momentarily in the background to look at how the Louvre’s caretaker Jacques Jaujard (Louis-Do De Lencquesaing) and the cultured German officer assigned to keep track of the removed works, Count Franz Wolff-Metternich (played by Benjamin Utzerath) reached an understanding about their historical roles. Sokurov raised any number of fascinating questions and unexpected historical perspectives in this engrossing documentary. It opens Friday at the Amherst Theater.