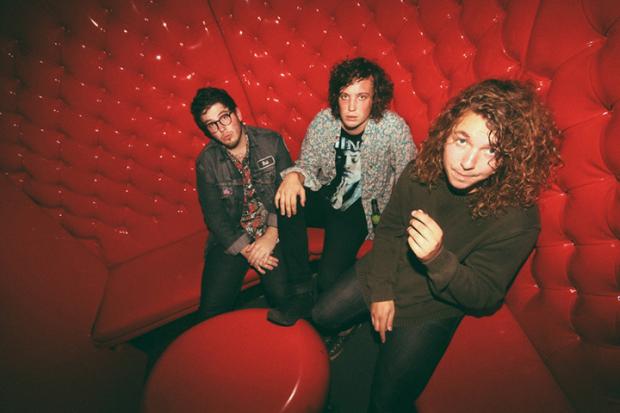 Made Violent: Rob Romano, Justin Acee, and Joe White. Photo by Brett Mikoll
by
Vanessa Oswald
/ May. 3, 2017 12am EST

Made Violent are anything but shy when it comes to their Buffalo roots. All band members—lead singer and bassist Joe White, guitarist Rob Romano, and drummer Justin Acee, all originally from the area—make sure to rep their city wherever their band takes them.

They formed the band at the end of 2013, giving the whole “let’s start a band” thing one last shot. Writing songs in a cabin in the woods together, they came up with the successful single “Wasted Days,” which made them known not just in Buffalo and nationally, but also internationally. Their journeys in music have even taken them to London’s legendary Brixton Academy, where they served as the opening act for Wolf Alice.

This past Monday, the band dropped the first single “Basement Ghost,” along with a music video for the song, from their upcoming seven-inch release.The band will take to the stage of Waiting Room on Friday, May 5 to celebrate the forthcoming release of their new collection of songs, which will be available to stream digitally on that day, with physical pre-orders available online and at the show as well. Drummer Acee was kind enough to chat with The Public about the band’s humble beginnings, breakout as a band, and current music-making.

How long have you known the other guys in the band? How long have you been a band?
Rob and I have known each other since we were in middle school. We rode the school bus together. He made fun of me because I like emo music and he liked punk music, and eventually it came to a point where I was, like, “I need a guitar player,” and I was, like, “Can you play?” And he said, “Yeah!” We ended up playing together, and along the way we picked up Joe. Joe is much younger than us, and we’re just blown away by him. We ended up just partying together. That was kind of how it all came to be. Joe would party with us then I would drive him back to high school in the morning. We asked him to play in the band that we were in at the time and he did. Then, when that all went to shit, we started Made Violent. It was funny because we were all in separate places. I was in California, Joe was filling in doing some touring stuff, and Rob was at home. We were, like, “Let’s just give it one last shot.” We got together and wrote what ended up being “Wasted Days” and this new single “Basement Ghost,” which we’re actually releasing for the show. The very first song we ever wrote was “Basement Ghost” in 2013, so it’s old, but we recorded it when we were in LA in 2015.

When you started the band, what were your expectations for it?
There were no expectations because the bands we had played in previously, it was like we were just the musicians following someone else’s lead. None of the songs were our own. It was this whole thing, like, we were just good enough to play, I guess. When that all went to shit, we knew the songs were kind of corny and whatever, we were, like, “We want to play music that we want to listen to.” That was the goal. When we finally got back together and started working and were just having fun, it was just about putting things together that we thought were like the bands that were influencing us at the time, which were early Kings of Leon, Cage the Elephant, and of course, the classics, like the Beatles and Nirvana. The main priority was just about making music that we ourselves wanted to listen to. It didn’t matter about anybody else. It wasn’t for anybody else. I think when you start to try to figure out how to connect with people more, you actually miss the mark.

What would you say is the band’s biggest accomplishment so far?
We were super stoked when we opened up for Wolf Alice in London at Brixton Academy in 2015. It was really cool when you’re backstage there and you see all the posters of the Foo Fighters and Dinosaur Jr.  There are so many different bands that have played there. It’s a legendary venue in the UK and we were just, like, “Wow, this is really cool to be here,” especially being this band from Buffalo that people back home were kind of cheering on. I think the greatest thing for us was just people hearing our music in general. We put out “Wasted Days” and there was just all this love from random people across the country, so that’s just as cool.

I actually interviewed Joel from Wolf Alice last year for The Public, and he had great things to say about you guys.
Yeah, they’re great people. We played some shows with them in the Midwest and the first day we all got really fucked up off Fireball and became friends, and from that day on it was just really cool. I was talking to Ellie when they asked us to come to London, and I was, like, “Why are you letting us come to London? This is your big release show.” And they were, like, “You guys made us feel at home here and we want to do the same overseas for you guys.” That’s kind of the Buffalo thing, I guess. We’re super welcoming people.

Are you guys currently working on any new music at the moment?
We were with Columbia and that was pretty much a horror story. Everything was peaceful in the end, they let us go and we left on our own terms. We recorded the album we wanted to record and now we switched over management and we’re working to shop with indie labels. The whole reason for the show on May 5 is we’re going to drop the seven-inch we’re putting out. It’ll be streaming digitally, but we’ll have pre-orders the day of show. We’re going to try to build that momentum and lock in with an indie label and put the record out because we recorded the record, but we have a good 15 or 16 songs we want to choose from and make something special.

Are Buffalo shows your favorite shows to play?
Of course. People just love to have fun here and everyone just gets boozed up and has a blast here. We have a lot of fun in Fredonia when we go there, too. We play small venues there and we’ll see kids doing backflips off little stages. You just see kids do the craziest stuff there and we’re just laughing onstage.