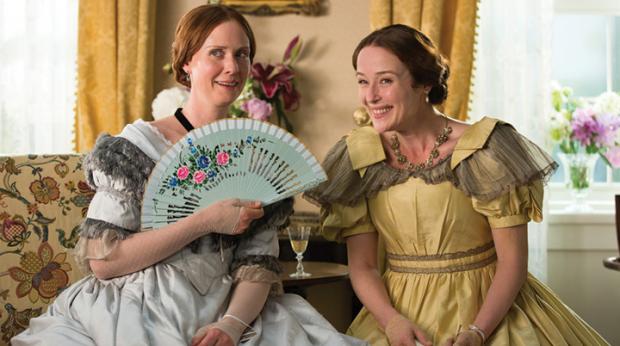 First things first. The title of Terence Davies’s movie about the life of poet Emily Dickinson, A Quiet Passion, is presumably meant to convey a personal existence and temperament marked by intense but suppressed feeling. That “passion” must, therefore, have been sublimated into artistic effort, and an accommodation with the laws and social conventions restricting females in mid-nineteenth century America. The problem is that Davies’ movie only very inconsistently communicates this concept. It’s too frequently obscure, sometimes inaccurate, and on occasion strangely digressive. There are moments of poetically evocative mood, a specialty of Davies (The Long Day Closes, The Deep Blue Sea). But they’re separated by scenes that are of dubious dramatic and biographical value.

It’s also the case that, particularly in its second half, it portrays an Emily Dickinson who scarcely resembles a shrinking violet, the title notwithstanding.

Dickinson’s life and work have been the subject of very extensive scholarly and popular scrutiny. The poet is the focus of an almost cultish admiration, but much of her personal history is unsecured in the record. It’s the topic of a vast field of inquiry and dispute. The reasons behind her (sometimes exaggerated) retirement to her Amherst, Massachusetts family home and much of the time, to her room; her adoption of an all-white costume; her reluctance to permit her poetry to be published (sometimes overcome)—all this is still uncertain territory, and much disputed. This uncertainty gave Davies ample latitude for interpretation, but he seems to have been unable to produce a cogent, dramatically consistent one.

Davies begins with the very young Dickinson at Mount Holyoke Female Seminary, where she quietly declines to join her classmates in an affirmation of Christian hope, in the face of a condemnation by the headmistress. (Here and in much of the first half she’s portrayed by Emma Bell, with Cynthia Nixon as the older Dickinson.) Back in Amherst, she writes her poetry in the dead of night, after seeking her father Edward’s permission. (He’s cleverly portrayed by Keith Carradine.)

The transition from a young, fairly sociable girl to a well-known semi-recluse at about age 39 is part of a mystery that the movie barely addresses. Davies invents a fictitious companion, Vryling Buffam (Catherine Bailey), who parries Emily’s earnest conversation with faux-Shavian, near-beer Wildean remarks and stilted attempts at wit (“Artificiality should always be spontaneous.”). These interludes are a heavy imposition on the audience, and do little more than demonstrate Davies’ tin ear for dialogue. In much of the rest of the movie, he’s tried to adapt sentences from Dickinson’s voluminous correspondence to conversation,  with results that are frequently forced.

Eventually, we get the dismissively sharp-tongued Emily, rebuffing friendly visitors from the second floor, speaking unseen to those below. This expressiveness will turn to sharply dissatisfied comments and then bitter criticism, as when she confronts brother Austin (Duncan Duff) over his adulterous affair with a married woman, although there is no record indicating Dickinson acknowledged the affair, let alone attacked her brother. At the end, we’re left with a woman who seems to be an embittered old maid. This can’t be what Davies was aiming for. There are other errors as well as anachronistic or dubious portrayals.

Davies does flirt with a narrative thread that might explain some of Dickinson’s behavior, but he lets it drop without making it clear. Dickinson may have suffered from epilepsy and sought seclusion to hide this affliction. There is evidence that may point in this direction and Davies shows the poet undergoing frightful fits, including in her death throes, in excruciating detail. But the word epilepsy is never uttered and no one in the movie ever refers to her terrible spells. Davies just creates a curious reticence.

Nixon almost makes some of this work, particularly in scenes with Jennifer Ehle, in the rather thankless role of Dickinson’s patient sister Vinnie. But this movie remains an elegiacally vague, dramatically erratic work