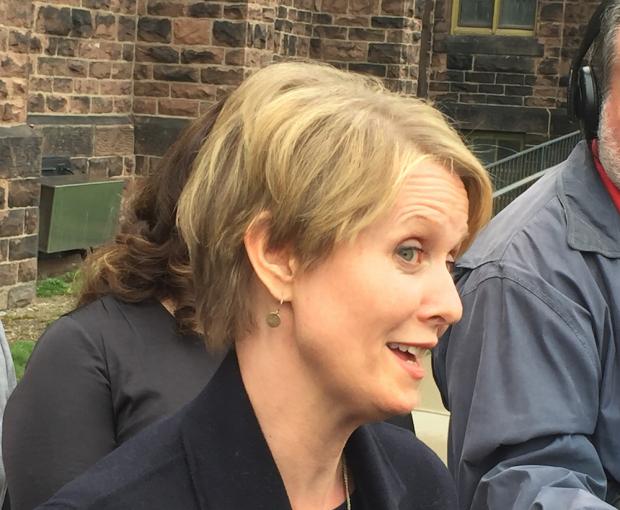 Cynthia Nixon, endorsed by the Working Families Party and running for the Democratic nomination for governor this fall, held a press conference outside Babeville's 9th Ward on April 25.
by
The Public Staff
/ May. 2, 2018 7am EST

Cynthia Nixon and Jumaane Williams: The two progressive candidates for governor and lieutenant governor, respectively, traveled through Western New York last week. Williams has been here before, both as an housing activist and a potential candidate; it was Nixon’s first visit as a candidate. Nixon held an economic roundtable with community leaders and progressive activists on Wednesday at Babeville’s 9th Ward. (It was meant to be at the Pucho Olivencia Community Center, but the center canceled at the last minute, under pressure from the Governor Andrew Cuomo’s political team, and so so did another community center that was the second choice; it took Ani DiFranco, who doesn’t even live here anymore, to make a visitor welcome.) Nixon also attended a Thursday evening potluck dinner hosted by Queers of Racial Justice, near Grant and Lafayette. There, a member of the group asked Nixon if she would run on another line in the general election if she lost the Democratic primary to Cuomo. She told the people there, many of whom wanted her to say yes, that to argue that there’s no difference between Donald Trump and Hillary Clinton is absurd. And, likewise, to argue that there’s no difference between Andrew Cuomo and any Republican is absurd. Not a straight-up no, but a reasonable answer, for which Nixon earns our respect.

We’re not going to give the Buffalo Sabres a hard-earned thumbs up here for their ineptitude and dumb luck. We’re saving our applause for Rasmus Dahlin, the super Swede who’s riding into town on a white horse to cure everything that ails our hockey wounds. Sabres hockey has been boring, stiff, depressing. No need for any of that anymore; the defenseman to end all defensemen is coming to defend our nets, hearts, and plummeting civic pride. Dear Rasmus, we have no idea what you look like or how to pronounce your name, but welcome to the imaginations of heartsick Buffalo hockey fans. In three years, when you’re old enough to drink in America, you’ll never have to buy a beer in this town.

Mayor Byron Brown and the Buffalo Common Council: Late last month, Buffalo’s Common Council voted unanimously, without debate or even discussion, to add an amendment to the city charter’s chapter on ethics. The amendment, the mayor or legislators to remove a member from a city board—like the Zoning Board of Appeals, the Planning Board, or the Preservation Board—if that member is party to a lawsuit against the city. We confess we missed this amendment in real time; it was brought to our attention by zoning law and preservation enthusiast Dan Sack, who wrote, “What sort of democracy threatens citizens who volunteer to serve on municipal boards for disagreeing and petitioning ‘the government for a redress of grievances’? Do citizens give up their First Amendment rights when they are on a city board? This is the first anti-whistleblower law I have ever heard of. Dismissing board members who might take the city to court because they do not believe the city is acting lawfully is offensive to free speech, open government, and the notion that these boards should be independent from Executive and Legislative authority.” We agree. And we suspect that the statute originates with Brown and is aimed particularly at members of the Preservation Board who have, in the past, pursued legal action to prevent the city from circumventing its own laws and procedures.

The closing of the Underground: Friday night was the farewell party for the one of the city’s most fondly loved gay bars; Sunday night was last call. Literally a hole in the ground, the basement bar on Delaware and South Johnson, in its various iterations, served as a cultural headquarters for five decades. The owners of the building, the upper floors of which are home to federally subsidized affordable housing, blame a HUD directive to seek new tenants, in response to complaints from residents.

Erik Bohen, “an island by myself”: If you missed Tom Precious’s excellent report in the Buffalo News, go find it. The gist is that Bohen, who won a special election for state Assembly last week against Erie County Legislator Pat Burke, arrived in Albany to find himself a pariah. Bohen is a registered Democrat who ran on the Republican, Conservative, and Independent party lines, but promised to caucus with Democrats. But Assembly Democrats don’t want Bohen, who ran with the support of right-wing demagogue Carl Paladino, so they seated him on the Republican side of the Assembly chamber. “But Republicans,” Precious wrote, “not wanting to suggest Bohen is a member of their conference, moved a desk that was next to him to create a space, leaving Bohen with an aisle on one side and an empty spot next to him.” Bohen won’t have too much time to make new friends, as he’ll have to hold on to the seat in November’s general election, very possibly in a rematch against Burke.