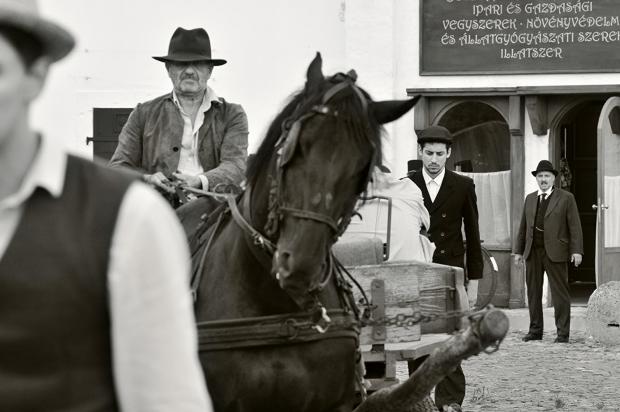 Will the Second World War ever stop being a source of material for new films? Probably not in our lifetimes, and certainly not in Europe, which was ground zero for so many stories that tested the possibilities of man’s inhumanity to man.

Two such films open in local cinemas. Unavailable for screening by press time, A Bag of Marbles (Un sac de billes) is an adaptation of a 1973 memoir by Joseph Joffo, a Jewish boy in Paris at the time of the Nazi occupation who with his brother was able to escape on foot from Paris to safety in Nice. Directed by Christian Duguay, the film opens Friday at the North Park.

From Hungary, 1945 takes place at the end of the war and asks the question, “Now what?” Specifically, for the residents of a small village, how are they to deal with their involvement in crimes that were committed in the name of the war? (That the village, which did not see fighting directly, is under the bullying observation of Russian soldiers reminds us that the near future has its own horrors in store.)

Taking place over a few hours on an August day, the movie opens with Istvan (Peter Rudolf), the prosperous town clerk, preparing for what he assumes will be a consolidation of his authority here. The radio announces the bombing of Nagasaki, elections have been announced, and his son Árpád (Bence Tasnádi) is marrying a local girl selected by papa. The whole town is invited to the celebration: What could go wrong?

Plenty. The morning train brings the unexpected arrival of two strangers. If this is starting to sound like a remake of High Noon, this is the point at which it veers from that template. The strangers are Jews, a father (Ivan Angelus) and his adult son (Marcell Nagy). They hire a cart to carry the boxes they brought with them, and proceed with it on foot to—where?

As the locals speculate on the strangers’ mission, it becomes clear that many of them are party to a secret that they would prefer to forget. It seems that when the Nazis came looking for Jews, their neighbors took advantage of the situation.

As an exploration of the corrosiveness of collective guilt, 1945 benefits from its leanness. Shot in luminous black and white, a look for which Hungarian filmmakers seem to have a particular affinity, the film’s 90 minutes are unhurried but inexorable. Based on a short story by Gábor T. Szántó, who adapted the screenplay with director Ferenc Török, the movie might have spent more time developing its characters and their varying culpabilities, but it didn’t need to, instead making its accusations with elegant concision. It opens Friday at the Eastern Hills Mall cinema.