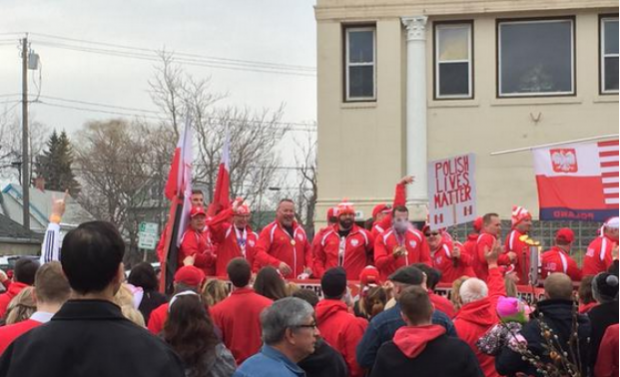 But before we get specifically to that, you’ll recall that “Airborne Eddy” Dobosiewicz likened Baltimore rioters to “animals”—specifically baboons in a Merseyside safari park. He said, “My intent was to kind of jolt everybody into reality. We’re doing bad things out there, folks, and the world is spiraling out of control.” How that justifies his selection of one specific group of human beings to be labeled “animals” remains an open question, but as a purveyor of local nostalgia and lore, surely Dobosiewicz must be aware of his own people’s history of rioting?

Did he not know that Buffalo saw Polish riots? In April 1898, the “air was full of flying stones” from an “angry, vicious mob” of Polish Buffalonians. Were they “animals”, Eddy? Or how about this story from 1894? Jewish merchant Louis Gertzman shot Bernard Renkowski, the Polish guy robbing his store. In response, neighborhood Poles descended on Gertzman’s store to exact revenge, breaking doors and windows, and ruining Gertzman’s stock. Were these Polish rioters, who were supporting the robber over his victim, “animals”? How about this near-riot at St. Adalbert’s because its priest was replaced with someone the local population didn’t like? Animals, Eddy? I mean, it’s not the same as protesting the apparent police homicide of a man in their care and custody, along with years of systemic and entrenched racism and inequality, but this group of Polish Buffalonians — 200 to 300 of them - rioted at the Broadway Market in 1893, looting food from merchants. They were out of work—hungry and poor (today we denigrate the poor and hungry as “animals” when they rob, steal, or riot). *Gasp*, ”We’re doing bad things out there, folks, and the world is spiraling out of control” My goodness. These Polish are thugs! So must have been these Italians and Irish engaged in a “race riot” in the streets of Buffalo ca. 1894. If only their mothers could have come out to beat them about the head and neck on national TV to show that the best response to senseless violence is child abuse!

Before you lower yourself to the level of pointing your finger at “those people” and denigrating them as “thugs” or “animals” — or worse — maybe take a moment to learn about the history of your own people, or the difficulty that oppressed minorities and immigrants face in a country that really wasn’t—and isn’t—set up to make things too easy for them. Walk a mile in someone else’s shoes before you take a fateful leap and deny them their humanity. In doing that, you just might expose your own inhumanity.