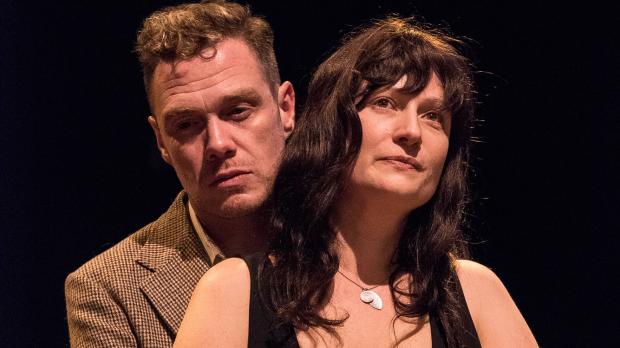 Chris Kelly and Kristen Tripp Kelley in The Beauty Queen of Leenane at the Irish Classical Theatre. Photo by Gene Witkowski.
by
George Sax
/ May. 1, 2015 11am EST

During a brief chat with a prominent local journalist before the start of a performance of Martin McDonagh’s acclaimed Beauty Queen of Leenane at the Irish Classical Theatre Company, he told me that the play, a favorite of his, is another example of “the drama of Irish miserableness.” His observation isn’t wrong, as far as it goes. The playwright certainly has availed himself of the elements in a legacy of Irish theater that comprises serio-comic examinations of troubled small-town, small-minded, illusion-ridden life. It stretches back over a century to J. M. Synge, and includes Sean O’Casey and Brian Friel. McDonagh’s play, the first in what has become known as The Leenane Trilogy (along with A Skull in Connemora and The Lonesome West) begins in a semi-familiar vein, in an economically depressed and socially repressed working-class setting, and proceeds with a mordantly quasi-comic tone that evokes memories of McDonagh’s forebears. But it transpires that there’s a lot more than just the familiar satirically rendered, bitterly experienced lives of this tradition.

Beauty Queen revolves around the plight of Maureen Folan (Kristen Tripp Kelley), a 40-year-old woman who would once have been called a spinster (and perhaps still is in her town) and who lives as a caretaker for her mother Mag (Josephine Hogan). These two reside together in a seemingly deadlocked state of low-level mutual warfare, Maureen articulately, mockingly resentful of her parent, Mag a passive-aggressive supplicant whose complaints and requests serve as an insidiously self-satisfying kind of control.

Their intimate combat has its comic aspect as Maureen exacts such little acts of revenge as deliberately serving Mag her powdered nutritional supplement with undissolved lumps and buying a brand of biscuits her mother dislikes. And, of course, there is the sniping and nasty, petty disagreements. At first, it can almost seem like McDonagh is doing Neil Simon infused with a dose of Quentin Tarantino (to whom McDonagh has occasionally been compared). But a sense of unease soon enough seeps into the proceedings. And a puzzle develops. It’s not hard to see what Mag gets from this arrangement, but what binds the apparently intelligent, reasonably attractive Maureen to it?

As these two go at it, the two actresses play off each other with a coordinated and compelling blend of brio and subtlety. It’s not every actor who can hold her own with the formidable Hogan, but Kelley manages it. They’re quite a duo.

At least part of the reason for this struggle is forthcoming, precipitated by a rare invitation to a party held by a local family for several members emigrating to America. (The lack of work in Ireland is a recurrent reference point.) Maureen almost doesn’t get to go to the affair, but she returns from it with a man in tow, Pato Dooley (Chris Kelly). In fact, he has silently admired her for many years, and, a little the worse for drink, he pays tribute to her as the title’s monarch. In the morning, their impromptu liaison turns colder after its initial warmth, but not because of any change of heart on Patto’s part.

This scene, which closes the first act, introduces a new note of pathos into the story, and this unexpected effect isn’t only the result of McDonagh’s writing. Kelly makes this moment palpable and plausible, his skillfully modulated performance promoting the shift in tone. He conveys this admission of feeling that Patto harbors and communicates the man’s sturdy decency.

This is an uncharacteristic moment in the play, and the second act quickly leaves it behind as the tension ascends to something more unsettling, and, eventually, savage. If earlier Beauty Queen sometimes seemed to evoke a bleaker Synge, or a punk Joe Orton, now the tone isn’t so much bleakly witty as ugly and mentally aberrant. And this is before McDonagh returns at the very end to that note of pathos.

This is a lot to encompass and sustain and some may find too hard to go the distance with the author, to follow him when he risks running off the rails into implausibility, seemingly without qualm or doubt.

But this production, under the sure hand of director Vincent O’Neill, and with this excellent cast—it also includes Adam Yellen in a crucial performance—makes about as good a case for McDonagh’s challenging, assertively disharmonious vision as one could ask for.