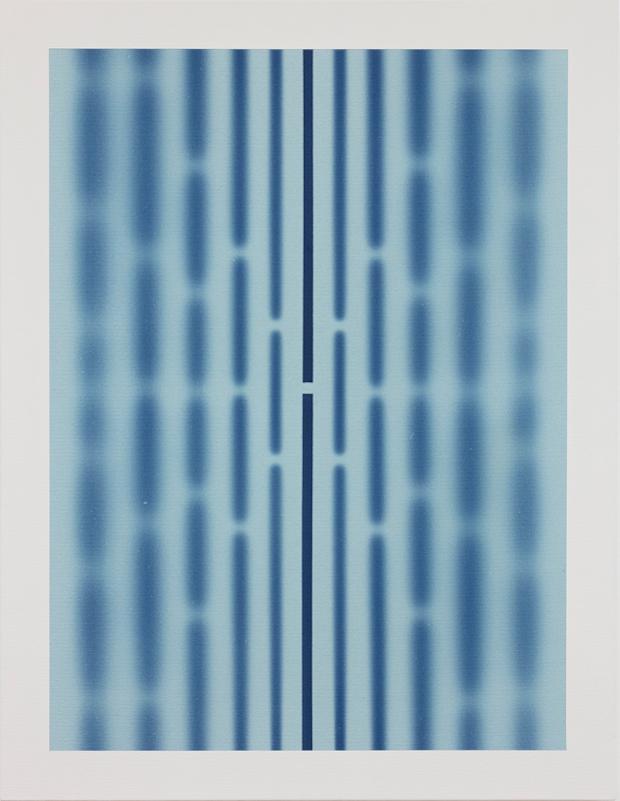 As we move further into the age of hyper-automation where Lightroom and Instagram presets produce “looks” that are mistaken for style—or worse, content— the collective primary goal should not be to indulge in photography’s predictable outcomes, but to question the medium in as many ways as possible, including where our experiential and physical definitions of a photograph begin and end. I see all of my works as characteristically photographic, in that they contain mechanically made images captured with light-sensitive materials, but it is important to me that they also declare the conditions of their own making, and in turn expand beyond the traditional definition of photographs.

Works by artist John Opera are currently on display in a solo show at the Nina Freudenheim Gallery and a group show—the main event contemporary portraits show—at the Burchfield Penney Art Center. You wouldn’t think the two bodies of work were by the same artist.

The works in the Freudenheim show are cyanotypes—blueprints, that is—cyan is a Greek word meaning blue—created without the use of a camera but just cyanotype-sensitized canvas exposed to one of two alternative light sources, fluorescent lights or lasers, plus some paint additional markings on the cyanotypes. They are abstract in appearance. One series has one recognizable element in it, what looks like a mat inner picture frame, rectangular on the perimeter outside, elliptical inside, and askew, and empty. No picture in the picture. What’s in the picture—framed in the mats—is pretty much the same as the background laser light and paint markings, looking sometimes like marble—or faux marble—veining, sometimes like disheveled diaphanous fabric.

Other of the cyanotype works feature orderly patterns of lines and dots and such, and a shallow focal depth of field, equating to sharp focus on a central point or area of the work, rapidly diffusing toward the margins. Some of these have a noticeably scientific resonance. One with dots—a central dot in clear focus and multitude of dots in more or less concentric circles around it and with some diffusion of focus—is reminiscent of atomic level electron microscopy images such as the famous Rosalind Franklin images of DNA molecules crucial to the determination of the DNA double-helix structure (for which three male scientists who were surreptitiously provided the images—but not Franklin—won the Nobel Prize). Another very beautiful work consisting of two vertical bars of vibrational effect changing tonalities against a solid blue background suggests chromatic spectrometry analytical raw data.

The works at the Burchfield Penney are what are called anthotypes. Starting with standard camera-produced photos, which are then reproduced in a camera-less process in pigments derived from fruit and flower sources—anthos is a Greek word meaning flower—using sunlight as the light source, and long—days to weeks—exposure times. (Fruit and flower juices are light-sensitive enough to be used as rudimentary print emulsions.) These works are representational—they are portraits—but noticeably dim, as if faded—which in fact they are, fading in real time—a human endeavors transience message—and monochromatic, in colors based on the plant juice type or mix used for each piece.

Works in both cases—both bodies of work—as much (or more) about process as (than) product. Employing unusual photographic technologies in both cases, but not cutting-edge technologies. (Both technologies were discovered by the same polymath scientist—mathematician, chemist, botanist—Sir John Herschel—son of the great astronomer Sir William Herschel—in the 1840s). Rather more in the way of back to basics. As a way to explore basic questions about photography, as a recorder of events in the natural world, and itself an event in the world and natural process.

In his artist statement for the cyanotypes show, Opera describes his work in general as “characterized by a shift away from reliance on the photograph purely as image, toward an examination of the threshold between image and object, and between observation and experience.” And of the cyanotypes in particular, he says, “instead of framing or fragmenting a subject—which is what the camera does—my non-camera cyanotypes generate their own self-reflexive universe. The subjects of these works are at once the behavior of light captured on the surface of the canvas, and the photo-object itself that contains the recording of the light event.” He calls the work an “experiment,” the goal of which is “to question what constitutes photographic observed space/surface, in order to extend my investigation into how photography both records and incorporates natural processes and phenomena.”

In his artist statement on the anthotypes, he calls that technology and body of work “an instance of nature representing nature.”

Another facet of artist John Opera also on show at the Burchfield Penney gallery is an exhibit of works by artist Victor Shanchuk, curated by Opera. Comprising photo-based works—but not photos in a usual or traditional sense—in two series: one of drawings or paintings on photographic paper with photographic chemicals, the other described as “inkjet prints of plastics and polarization film.” Jumble mixtures of disparate forms and dazzling polarization colors. Fractured rainbows.