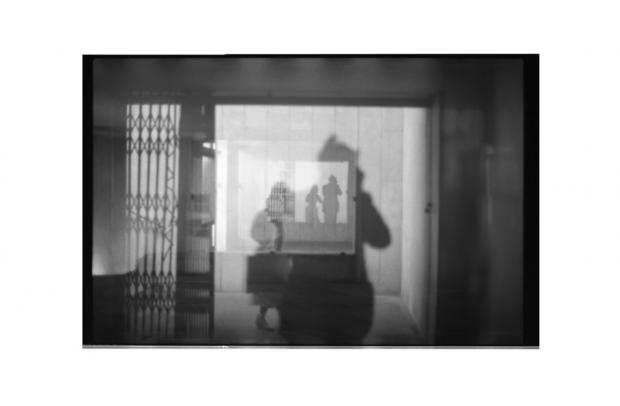 A current exhibit at the Burchfield Penney is about two extraordinary artistic and religious figures and lifelong soul mates on their roughly parallel but largely divergent spiritual and artistic quests, Thomas Merton and Robert Lax. They met as students at Columbia University in New York City, but both had substantial Western New York connections, specifically to Olean and St. Bonaventure University, where both taught at times, and Lax grew up—off and on—in Olean.

Merton ultimately wound up a Trappist monk in a monastery in Kentucky, while Lax lived the latter half of his life on Greek islands, the final years on the island of Patmos, where St. John the author of the Book of Revelation composed that strange mystical prophetic screed, and before that for several years on Kalymnos (a name that means “beautiful song”).

Two men so very much alike, and very different. Among the differences, that Merton, though he wrote many poems, was essentially a prose writer. While Lax, while he wrote copious prose—mostly in the form of personal journal entries, and letters to a wide variety of correspondents—cartons of this material now in archives at St. Bonaventure, cartons more at Columbia—was essentially a poet.

Another key difference—it has been observed—that in their spiritual and artistic quests, Merton was more concerned with answers, Lax more with questions. (This difference possibly not unrelated to the prose versus poetry difference.)

The exhibit covers both men, but is weighted slightly toward Lax, as the less famous of the two—so the path less trodden, while Merton studies became virtually an industry—but equally significant in their personal relationship, and equally or more significant than Merton as an artist. Lax tended to get less than his due attention in part because of the obstinately avant-garde character of his poetry—minimalist spare, lines of a word or two, or partial words, snaking down the page, sometimes syllable by syllable, including long poems of very few discrete words repeated like a mantra, and little syntax—but literary critics who did attend to his work could be effusive. Columbia professor and friend—but nonetheless judicious literary critic—Mark Van Doren called one of his works “a grand poem…Homer would have liked it.” British critic R. C. Kenedy, who wrote extensively and insightfully about Lax, called one of his works “one of the greatest poems in the English language,” and one of his books “in all probability, the finest volume of poems published by an English-speaking poet of the generation which comes in T. S. Eliot’s wake.”

Partly also Lax got less than his due attention because he lived on remote islands. An apparent similarity between Merton and Lax that turns out to be a difference relates to hermit predilection. Merton chose a formally monastic lifestyle. Lax did not go that extreme, but lived on Aegean islands among fisher communities. He has been described as a hermit, but he rejected that description. A term he was more comfortable with was “solitary.” He needed time to himself, for his writing, for meditation, for prayer, but also needed regular interaction with ordinary people around him, in tune with the world around them, with the seasons, with the environment, in the islands case, the sea and its perils. Previously—before the Aegean islands years—he lived with circus troupes, accompanied them on their peregrinations, and wrote poetry about them, the jugglers, the acrobats, their skills, their grace, their perils.

The exhibit materials include framed literary items—mostly poems—and photos, and vitrines containing some of their books and other published works. The weighting in Lax’s favor occurs in that all the framed literary items are original issues on brown paper of the broadsheet he and graphic artist Emil Antonucci produced on Antonucci’s hand-operation press for several years running in the late 1950s, early 1960s, entitled Pax, Latin for peace. The Pax materials are by various authors, including Merton and Lax (writing for his own publication under the pen name Peter Lewis) and members of their literary and social circle, the likes of Jack Kerouac, e.e. cummings, and Mark Van Doren. Pax graphics are by Antonucci and Ad Reinhardt, another Lax lifelong friend—from their high school days—and artistic exemplar. (Lax’s stark minimalist poetry seems somehow related to Reinhardt’s black paintings.)

Though roughly equal numbers of their photos, which again are similar but different. Wall copy talks about how Merton’s photos were “made as Zen-based expressions to foster contemplation.” Nature subjects—granite rocks and tufts of grasses pushing up among them—and architectural vignettes—a window recess in a cheap construction industrial building, colonized by a tangle of scrub arboreal flora. Lax’s photos at once more simple and more complex. About black and white and shadow. Including the shadow of the photographer taking the photo. The artist behind the art. In passageways amid whitewashed stone walls on Greek islands. Stone passageways and stone steps. Metaphors of spiritual ascesis. And one photo of a shadow of a hand on a wall. Reminiscent of cave paintings hand images. The earliest ever assertion of the artist behind the art.

This exhibit curated by Tony Bannon, Burchfield Penney director emeritus, and Paul Spaeth, St. Bonaventure University librarian and curator of the Thomas Merton archives, and founder and curator of the Robert Lax archives. The exhibit continues through August 26.