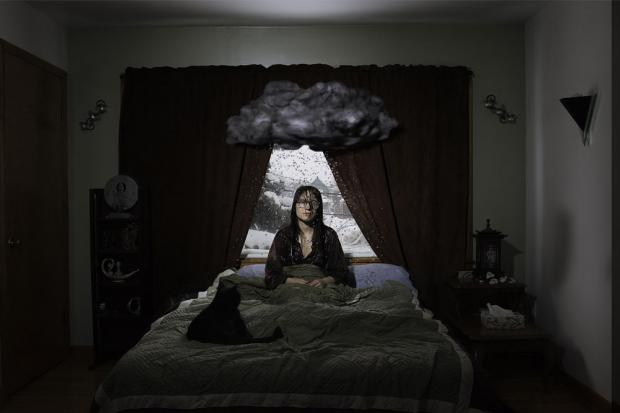 Woman waking up on the wrong side of the bed under a cloud, by Fredrick Mount.
by
Christopher John Treacy
/ Apr. 28, 2015 4pm EST

Don’t be surprised if you walk in on local photographer Frederick Mount doing something unexpected in your basement.  Or in the abandoned shed on the adjacent lot. Or when you go to replace the light bulbs at that property you’re looking to unload over on Chandler.

“I’m addicted to different locations,” he confessed during a recent afternoon chat. “I like adventure and new experiences, and finding a location that works is half the fun. If I want to use a location I technically shouldn’t be in, we call it a ‘run and gun’ and get it done as fast as possible. There’s always a way around things. I think it’s better to ask for forgiveness afterwards rather than for permission beforehand. Asking permission is boring, whereas by asking for forgiveness, you’re forging a path.”

He makes it all sound so reasonable. The quiet headspace of a maintenance day job has spoiled him with time to daydream about creative possibilities. The good news is, the 29-year-old South Buffalonian is very respectful of borrowed spaces, so if you don’t catch him in the act you won’t know he came by. He also enjoys working in the wee hours, so you’ll probably sleep through the whole ordeal anyhow.

All joking aside (he would never invade your home to take photos.…not while you’re living in it, anyway), Mount’s photography requires access to a variety of settings that can’t be recreated in his living room or a standard studio. To survey his work is to be confronted with a rare gift for convincing surrealism wherein a grandfather clock appears on a shoreline, or gigantic white balls function to isolate us from one another. In one series, men in white hazmat suits confer with black robed-and-hooded individuals to build a metaphor about moral judgment. In another—his current project—synthetic storm clouds seem to persecute certain individuals.

To create these complicated scenes, Mount often gets help from his wife Jen, who has been known to appear in his work. And with its seemingly never-ending supply of abandoned nooks and crannies, Buffalo is a perfect spot for him. But that’s only something he’s embraced in recent years, after overcoming the “get outta Dodge” mentality he grew up with. A teaching stint in South Korea helped him gain perspective.

“I did a lot of urban exploring photography as a means of trying to connect to this city, to connect with its past,” he said. “Once I left the country and returned, I gained a new appreciation for it. I’m no longer looking for the decline of Buffalo. I’m very inquisitive by nature, and I use my photography as a way of asking and, potentially, answering questions. The pictures are always a reflection of something I’m going through at the time, and they started as a means for me to try and gain a better understanding of this place that shaped me.”

A Man Opens His Eyes To Endless Possibilities by Frederick Mount.

Since those early urban exploration studies, Mount has evolved into someone who takes photos that emulate the cinematic images in his head, and they tend to contemplate weighty internal debates. A self-described “art-asshole,” he’s easily bored by mundane shots of sunsets and puppies which, while dear to the hearts of many, just don’t make him tick. But using his camera to address existential issues definitely does.

“The images I go after are like stills from a movie—there’s something that comes before and something else right after,” he said. “I’m just capturing one little slice. Since a series can take six months to a year to complete, if I don’t have a deep-seated personal connection to the concept, it’ll fizzle out. It’s partially true that I’m the subject in most of my photos even when I’m not there. But my feeling is, if the images aren’t somehow personal, then you’re just taking pretty pictures. And there’s nothing wrong with that. It’s just not my forte.”

Most photographers that have been at it for any length of time will attest to the value of lighting as the most powerful emotive component in a given shot, something with which Mount wholeheartedly agrees. But beyond that, he’s careful not to get too hung up on the scholarly aspect of taking pictures—rules are made to be broken.

“Many photographers worry about the technical aspect of their work way too much and that’s what keeps them from completing projects, but for me it’s conceptual—does the image make you think? Is it engaging? That’s what’s most important.”