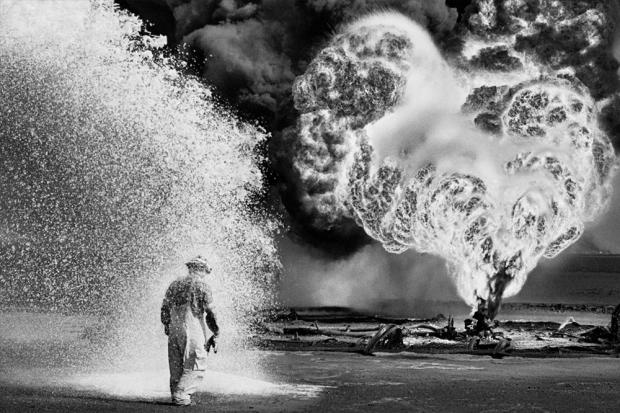 You may not know the name of Brazilian-born photojournalist Sebastião Salgado, but you’ve probably seen his most famous work: images taken at Brazil’s Serra Pelada mine in the 1980s, where between 50,000 and 100,000 men worked without machinery in a desperate attempt to get some of the gold that had been found there. You probably remember seeing some of the long-distance photos in the series and thinking, “What kind of insects are these?” before understanding what it was you were looking at.

Looking back at the shocking photographs he took there, Salgado recalls feeling that “I had returned to the dawn of time, to a world organized in complete madness.”

That was a feeling that followed him through much of his career, as recounted in The Salt of the Earth, a documentary co-directed by Wim Wenders and Salgado’s son Juliano Ribeiro. Educated as an economist (“I know what drives the world”), he left a career with the World Bank to travel around the world, spending months living with people who generally fall under the “First World”’s radar.

His interests led him to many of the worst human catastrophes of the last few decades, including the civil wars in Rwanda, the African famines of the early 1980s, and other disasters that caused the displacements of tens or hundreds of thousands of people. Often working with Doctors Without Frontiers, his aim was to bring suffering to the attention of the rest of the world; that his luminous black-and-white images were so compelling made them that much harder to ignore.

The Salt of the Earth took the top prize at Cannes last year and was nominated for the Academy Award for best documentary, which it might have won if not for what the Oscar voters saw as the pressing political importance of Citizenfour.

It was not an easy movie to make: Wenders and the younger Salgado had each started a similar project independently and decided it would be more useful to collaborate than compete.

It is often not an easy movie to watch. The worst of the disasters that Salgado witnessed were not natural but man-made. (The few months of genocide in Rwanda, hard as it may be to believe, were not the most extreme tragedy to befall that country.)  Spiritually and psychologically exhausted after 25 years of this, by the late 1990s Salgado says “I no longer believed in any salvation for the human species.” That he finds salvation for himself in something that starts out as a small side project with his wife lets us leave the film with our spirits raised, but it would be hard to forget what you’ve seen here.

The bulk of the film consists of Salgado looking at and commenting on his photos on a special mirrored screen. Wenders treats the images with the respect they deserve, letting them fill the screen, never zooming in on a detail or resorting to that fake 3-D treatment so popular with the Ken Burns school (as if afraid that viewers won’t put up with pictures that don’t move). You might wish that Salgado had been asked to comment on his preference for B&W, but then, these results speak for themselves.

A final thought: Like his New German Cinema compatriot Werner Herzog, Wenders has become as adept at making documentaries as fictional films. The same is true of many British filmmakers as well, especially those who came of age in the 1960s and 1970s. Why can’t you say that about many American filmmakers?