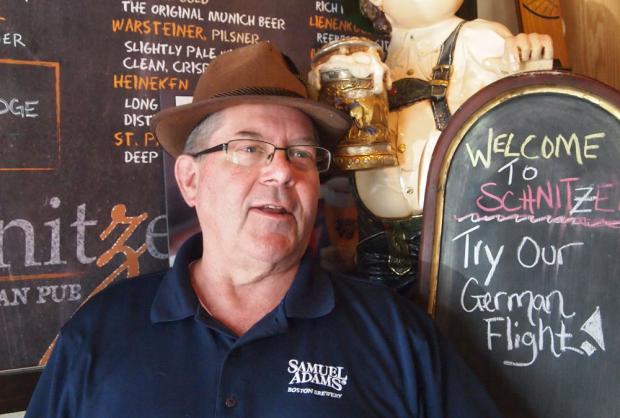 Mike Rizzo, owner of several Italian restaurants in the Northtowns, wanted his next project to be a tribute to his mother, who is of Swiss-German descent, and the Old World favorites she prepared.

The result is Schnitzel and Co., a Swiss-German pub in East Amherst whose ambience and menu alike offer an experience that is as authentic as it is enjoyable.

The restaurant is off the beaten path, tucked into a wooded area on New Road just north of Dodge in East Amherst. Even the approach feels authentic—as if you’ve suddenly traded Amherst’s suburban sprawl for Der Schwarzwald, the dense “Black Forest” covering much of southwest Germany.

In some ways, the East Amherst location is also a tribute to the large contingent of German settlers who populated the area throughout much of the 19th century.

Upon entering, I’m greeted by Bruno, a Lederhosen-clad statue with a chalkboard in one hand and a generously filled stein in the other. Bruno is one of many décor pieces setting the tone of the main bar area. Pete Sinclair, the attentive and inviting general manager, is tending bar today and quickly takes care of me.

It’s lunchtime on a Friday—the only day Schnitzel and Co. is open for lunch—and the place is nicely packed. The warm, comforting atmosphere provides a friendly setting that caters equally well to families, friends, and business colleagues. Indeed, all three constituencies are well represented today, and the atmosphere is robust and alive but never overbearing.

As a restaurant-goer, I’m as much a fan of décor and ambience as I am of food or service, and Schnitzel does not disappoint. The overall look and feel delivers all the charm of a rural German pub, but it’s the meticulous idiosyncrasies of the décor that win the day. My eyes are drawn to a pair of vintage cross-country skis hanging on the wall. “We found those on Craigslist and literally spent an entire day hanging them in different places to find the right spot,” explains Sinclair “[Owner] Mike [Rizzo] is very detail-oriented.”

The menu centers around four types of German sausage—knockwurst, bratwurst, mettwurst, and weisswurst—as well as schnitzel made with chicken, perch, pork, and veal. But despite its very specific German focus, the menu offers nice variety, including soups, salads, sandwiches, and flammkuchen—a German-style flatbread pizza. And for those less ethnically inclined, they still have you covered with burgers, ribs, fish fry, and beef on weck.

But the potato pancakes are truly the diamond in the rough of this menu. Offered in regular or sweet potato, the pancakes were easily the best I’ve ever tasted—an opinion shared by many online reviewers.

“Everything is made from scratch, every day, here at the restaurant,” Rizzo tells me. “We make everything fresh.”

After knocking the German pub experience out of the park, Schnitzel also leaves room for fun specialty events centered on craft beer. Thursday is “Flight Night,” when patrons can enjoy $6 flights of beer and half off the late-night menu from 8pm to 11pm. “Brew Crew,” a beer pairing dinner on the third Monday of each month, is hosted by a different local or regional craft brewery each month. The next, featuring Resurgence Brewing Company, is on May 18.

Schnitzel also hosts a Brew Crew Bus Crawl, a daylong tour of local breweries. The next is coming up on Saturday, May 16, and will include stops at Gordon Biersch, Hamburg Brewing Company, Rusty Nickel, and Flying Bison. Guests will enjoy beer tastings and a tour of each facility. (Call 691-4045 for tickets; spaces are limited.)

Open since September 2013, Schnitzel and Company has proven itself worthy of the venerable Rizzo name and no doubt stands out among the other Italian-themed restaurants in the Rizzo portfolio, which includes Rizzo’s Casa di Italia (2763 Eggert Rd., Tonawanda), Rizotto Ristorante (Maple Rd., Williamsville), Banchetti by Rizzo’s (550 North French Rd., Amherst), and their newest addition, Vito & Vino (9210 Transit Rd., East Amherst).

If you’re in the mood for authentic Swiss-German cuisine, check out Schnitzel and Company, located at 15 New Road (on the corner of New Rd. and Dodge Rd.). Or visit their booth at Taste of Buffalo this summer.