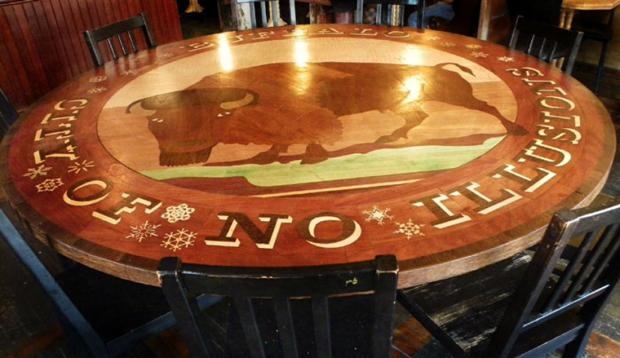 Every T-shirt tells a story.

That’s the guiding philosophy behind the life’s work and entrepreneurship of graphic artist Michael Morgulis, whose Local Color Gallery at 1417 Hertel Avenue is both shop and studio. It is now also home to an eight-foot table, with a rare-wood inlay top replicating “City of No Illusions”—arguably the best Buffalo logo ever, designed a generation ago by the T-shirt king, in sly and oh-so-apt homage to his hometown.

As with everything in the Morgulis oeuvre, there is a story behind this iconic logo, which was actually born as a T-shirt during the Blizzard of ’77.

In the late 1960s, as a grad student in UB’s just-hatched American Studies program, Morgulis was asked to use his artistic talent to help establish an identity for the new major. The mural he created featured a buffalo, but no slogan. Words came a decade later, when Morgulis, then owner of a design studio /silkscreen print shop called Great Arrow Graphics, was asked by American Studies colleagues to design a T-shirt for the program. The old mural image needed a clever slogan. Someone referred to Ursula K. LeGuin’s post-apocalyptic sci-fi novel City of Illusions. “I said no, it should be ‘City of No Illusions,’” recalls Morgulis. The phrase stuck.

When he went to work on the final design the next day, snow had begun to fall. It was late January 1977, and an epic storm was just commencing.

That T-shirt design, which remains one of the most popular in his inventory to this day, and is sent out all over the world, references an official-looking city seal. It features a bison encircled by snowflakes. Over the years some have taken issue with the words, which Morgulis admits to being “on the edge of snideness.” But he wanted something with an edge, and something people could relate to, as truly representative of the city he loves. “People believe in the City of No Illusions,” he says. “I’ve been asked about it, and I say, ‘Wouldn’t you rather live in a place without illusions—that is, someplace real?’”

One longtime customer who bought many City of No Illusions shirts over the years to give to business acquaintances was the proprietor of Buffalo Hardwood Floor Center. One day he asked if Morgulis would object to having an artisan create a floor medallion based on that logo for their showroom. Later, when the company moved, Morgulis was offered the giant medallion, to which he added a pedestal base, creating a table. For many years that was stored in his studio at the Tri-Main, and then moved to the Hertel shop when he relocated there in 2010. But Morgulis was always interested in a more public space, so when his friend Prish Moran opened a second Sweet_ness 7 Cafe on Parkside, he offered it to her, and soon it was in use as a communal table in the coffee shop. That space was recently reconfigured, and the eight-foot table was just brought back home to Hertel Avenue, where Morgulis hopes people will come to check it out.

“What’s important to me is I had something to do with it, and it has a story—otherwise, it’s just a big piece of wood. Or a lot of little pieces of wood…”

The artist, printmaker, poet, and indisputable Buffalo booster displays no false modesty about his enduring T-shirt design. “I don’t think anyone has come up with as a good a logo/slogan for the City of Buffalo since.”

Any ideas where Morgulis’s table should go? Send them to info@dailypublic.com.