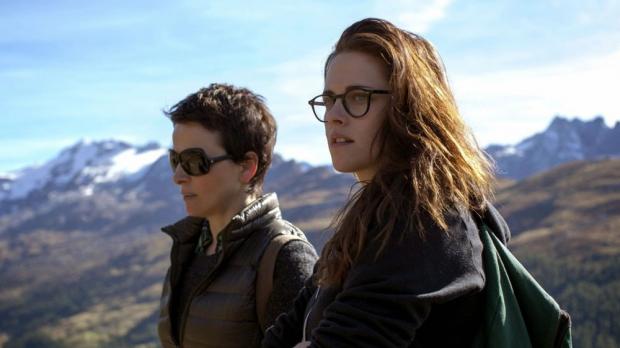 There may be two principal market sectors for Olivier Assayas’s Clouds of Sils Maria: those who strongly admire French star Juliette Binoche—a largish number, surely—and those who like “behind the scenes” looks at the theater and the lives of its artists. Assayas’s film certainly provides Binoche an opportunity for a varied performance, spirited but with notes of reflection and rue. It’s a kind of low-key diva role and performance, and Binoche is certainly impressive.

She’s Maria Enders, a middle-aging stage and film star whom we encounter on a train headed for Zurich. There she will accept an award for the man whose play afforded Maria her first big role decades ago and set her on the road to prominence.

In it she played an exploitatively maneuvering young businesswoman who has an affair with her female boss. Maria’s mentor dies as she’s in transit and when she arrives, there’s an offer to appear in a London revival of the play, this time as the older woman. She accepts with some reluctance and thereafter we’re treated, or subjected, to long sequences of her going over her lines with her young personal assistant (Kristen Stewart) in the Swiss Alps.

Clouds may be intended to address the interpenetration of life and art, but there’s too little dramatic charge and human interest to arrive at any insight or tension. The protagonists, including, eventually, Chloë Grace Moretz as the very junior Lindsay Lohanish movie star who will play the role Maria once had, seem to be playacting without much point. At least, that’s how it came across to this viewer. Assayas seems to have taken too much for granted.

There’s some gloriously arresting photography in the mountains, accompanied by music from Pachelbel and Handel, and there’s Binoche’s fine performance, which does enliven some of the too-unfocused narrative.

The title, by the way, is a reference to the striking dynamic cloud formations that funnel through mountain passes in the Alps near Sils Maria. There must be a metaphor hiding somewhere in that title, but I gave up trying to get to it after awhile.