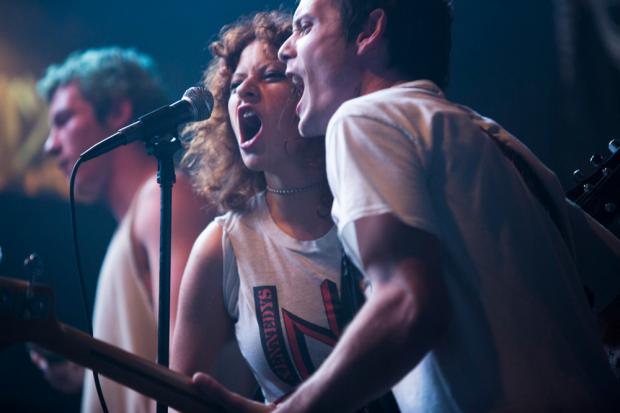 As this weekend marks the halfway point between the last and the next Halloween, those of you who live for all things scary will find sustenance in two new movies that are short on exposition but filled with moments to make you jump.

A hit at Cannes and the “Midnight Madness” series at TIFF, Green Room is a self-conscious throwback to the who-will-survive horror movies of the 1980s, when realistic carnage had to be provided by make-up artists instead of computer operators. Our heroes are the Ain’t Rights, a hardcase hardcore band exhausted after touring the Northwest in a cramped van. Stranded after a promised big show is canceled, they agree to do a gig at a club up in the woods of Oregon.

The place turns out to be less of an entertainment venue than a hangout for a band of skinheads (headed by, of all people, Patrick Stewart). After treating their audience to an impromptu cover of the Dead Kennedy’s “Nazi Punks Fuck Off,” the Ain’t Rights (who ain’t too smart, either) collect their money and head for the exit. Unfortunately, on their way they find the victim of a nasty murder. And their hosts are a group who don’t want any witnesses around to dispute the cover story they plan to give to the cops.

The indie film Darling takes its lack of details for granted: You get the impression that filmmaker Mickey Keating wants you to provide the story yourself, or even better assemble it from the dozens of 1960s and 1970s films he likes to name-check in interviews. Chief among these, from the evidence of the final product, is Roman Polanski’s 1965 Repulsion, a black-and-white story of a troubled woman who slips into madness and murder while alone in a house.

But where Catherine Deneuve’s insanity in the Polanski movie was sparked by sexual repression, Keating’s heroine (Lauren Ashley Carter) has no specific psychology. She doesn’t even have a name: We have to settle for “Darling,” as she’s called by the woman (Sean Young) who hires her to housesit an old Manhattan mansion. (The title is probably meant to refer to another Swingin’ Sixties movie starring Julie Christie as an amoral striver, though the connection is less clear.)

Keating divides his film up with chapter headings that suggest a story of demonic possession, and there are occasional clues along that line, like a room that Darling must never unlock and a necklace bearing an upside-down crucifix. But this movie works entirely as an exercise in style, playing with images of Carter’s staring face (it’s up to the task), high-contrast black-and-white images, jarring sound design, and slashing editing. If Darling ran any long than its 78 minutes it would become wearying. As it is, it does what it wants to do quite nicely. It plays this weekend at the Screening Room in Amherst.

Two documentaries showing this week paint portraits of two very different cities. City of Gold is ostensibly about Pulitzer Prize-winning food critic Jonathan Gold, whose beat is the kind of ethnic restaurants that Craig Claiborne never would have gone near, if he even knew that they existed. But Gold’s real subject, and that of director Laura Gabbert, is Los Angeles, the sprawling city that follows no rule of design and that in recent decades has become home to lively immigrant populations from around the world. And because LA is a mosaic, Gold finds the most exciting discoveries in the “fault lines” where different cultures bump up against each other. At the Eastern Hills Cinema, which is fortunately on a strip with lots of restaurants—you’ll leave the movie hungry.

I Am Belfast looks at the home city of film essayist Mark Cousins, best known in the US for his 15-part series The Story of Film. Mixing leftover footage from other projects and archival clips with new footage by the brilliant cinematographer Christopher Doyle, the film is a poetic look at the past and present of a city much older than the recent troubles for which it is best known. Filled with gorgeous images, it’s a blessing that I Am Belfast will be screened (if only once, this Thursday at 9:55pm) at the North Park.

Papa: Hemingway in Cuba was filmed from a screenplay by the late Denne Bart Petitclerc based on time he spent with Ernest Hemingway in Cuba in the late 1950, a few years before the writer’s suicide. As directed by Bob Yari (whose Yari Film Group is also distributing it), the film benefits from having been shot on locations in Cuba, including Hemingway’s house (now a museum). But in most every other way it’s godawful, with trite dialogue, poor performances, and painfully bad editing. (You know that editing is bad when you notice it.)