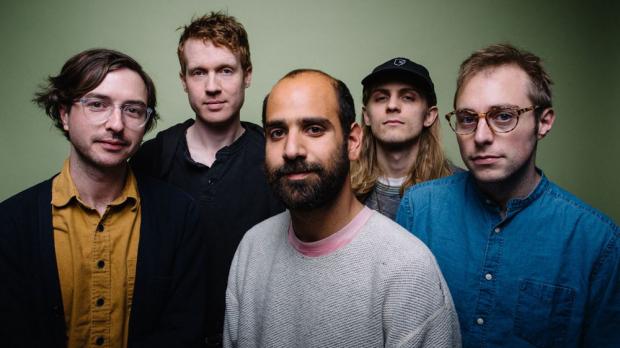 A new music festival was recently announced for Buffalo’s Cobblestone District, and the lineup is full of exciting national acts, rising regional bands, and, up-and-coming local artists. The festival, which will take place July 15 and 16, is called Cobblestone Live! and it’s produced by Buffalo Iron Works, Lockhouse Distillery, and Sunbeam Entertainment. Music fans in Buffalo are bound to recognize many of 50 or so names on the festival’s two-day schedule, especially headliners Real Estate, the critically acclaimed New Jersey-based indie rock band signed to Domino Records.

But, like any good festival, Cobblestone Live! envisions a few different itineraries for music fans. Fans of jam music, which Buffalo Iron Works has focused on in recent years, will be happy to see headliners Moon Taxi and Aqueous, both hailing from Buffalo. If you’re inclined to go down that path, you’ll find Funktional Flow, the Intrepid Travelers, and Moon Hooch, among others. Stick with indie rock and you’ll be pleased to see bands like Delicate Steve, Midnight Snack, Lazlo Hollyfeld, and Aircraft on the line up. There’s also a healthy dose of club music too, from Solidisco and Eyes Everywhere.

“We were extremely excited to to be asked to play such a dope festival in our own city,” says Kyle Tatum one half of the duo Eyes Everywhere.

“The lineup is incredible. Especially psyched to see a solid mix of out-of-town headlining talent along side other artists from Buffalo who are making waves nationally and beyond, like Aqueous and Solidisco. Really pumped to spend some time out in the sun with the city going wild.”

The footprint of the festival will be situated on the foot of Illinois Street, where the main stage will be set up.

Stage two will be inside of Buffalo Iron Works. Between Buffalo Iron Works and Lockhouse, along South Park Avenue, there’ll be a vendor area—which will include food trucks, a beer tent, and more—and then Lockhouse will serve as stage three, hosting much of the late night entertainment, like Solidisco and Eyes Everywhere.

This festival has clearly has required some cooperation from Lockhouse and Buffalo Iron Works, two venues that at times have competing live music events. CJ Cook, who along with his business partner Vinny Croglio founded the promotions company Sunbeam Entertainment, helped to facilitate a partnership for this festival.

“Cobblestone Live was kind of this brain child from Josh Holtzman, who is the GM over at Buffalo Iron Works. He contacted Cory Muscato, who is one of the owners over at Lockhouse, and he said, ‘Hey, we should do a music festival that highlights this booming, up-and-coming area,’” says Cook, who has been booking shows at Lockhouse for the past year. He says that he was contacted by Muscato because Muscato thought it would be wise to have another promoter on board.

“Buffalo is notoriously known as the City of Good Neighbors, it is in that spirit that we’re excited to bring Cobblestone Live! to our community,” says Muscato.

The idea only began to germinate in January, and so it has left the ground pretty quickly. Holtzman, general manager at Iron Works, believed the time was right. “Looking around at all the eclectic establishments here in the Cobblestone District, it only seemed natural to bring them together for such a positive event.”

Holtzman also brings some valuable experience to the table.

“Josh [Holtzman] has done a similar thing, closing down Illinois Street for his BBQ & Blues Bash, so we knew it was doable,” says Cook.

Cook books mostly indie rock and jam bands for shows around town—in the past year he’s booked Delicate Steve, Midnight Snack, Ellen Siberian Tiger, and others who he has booked again to play this festival—but he’s also worked on larger scale events. “I went to the University of Vermont and I organized our college Spring Fest. That was, capacity-wise, around 5,000 people.” He helped book MGMT and the Roots for these annual Spring Fest events. He says the most challenging part of running an event like this is putting together all of the permits required.

“That’s the annoying part, but it hasn’t been too bad so far,” he says. “Booking the talent was the easy part.”

One of their biggest accomplishments so far, the organizers say, is partnering with Planned Parenthood, who will be the main beneficiary of the event.

“This event is so much more than just a music festival,” says Muscato. “It’s an opportunity to add another dimension to our city. Putting this together we have the opportunity to work with so many like minded people that share our values and ethics. To be partnered with such a valuable and prolific organization such as Planned Parenthood for this festival was really the cherry on top.”

This aspect has been appealing to many of the artists involved with the festival too, like Tatum: “Finding out that the festival will benefit Planned Parenthood was a major plus. With our own parties we have been trying to take a more conscious stance on partying by making sure proceeds go to causes we care about so it means a lot to be involved with other people who are on the same vibe.”

As far as goals go, the promoters hope to make this a yearly event that maybe one day could grow into something even the size of a festival like Lollapalooza.

“Another point of the festival is to highlight these awesome up-and-coming acts. We came together and said, ‘Why not do a really eclectic lineup?” says Cook. “Expect a really good time, expect to be impressed with new bands. I think that’s the thing I want people to walk away with. We want people to be really pumped that something like this is going on in Buffalo.”