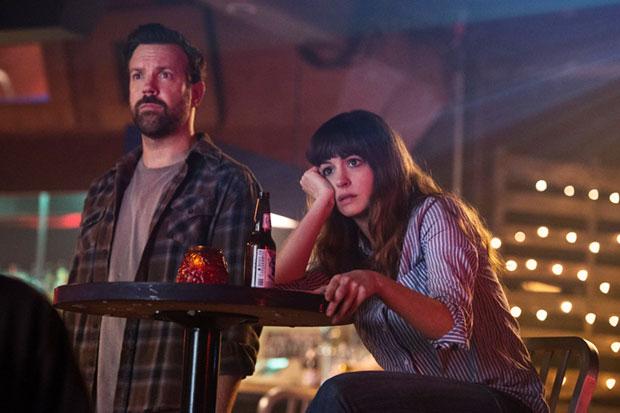 You’d have to go back to the early heyday of Charlie Kaufman (Being John Malkovich, Adaptation) to find a movie like Colossal, one that not only has an utterly novel premise but that manages to keep it moving in unexpected directions. I love to think of viewers who will come across this movie on cable a few years from now, start watching solely on the basis of stars Anne Hathaway and Jason Sudekis, and halfway through say to themselves, “What the fuck is this?”

The next best thing is for you to stop reading this now and just go see it when it opens at the Dipson Amherst this Friday. I guess it’s possible you might like it, but I can’t believe that you won’t have found it worth your time simply for novelty value.

Still here? Oh, ye of little faith. Anne Hathaway stars as Gloria, an unemployed writer living the high life in Manhattan, much to the annoyance of her boyfriend (Downton Abbey’s Dan Stevens). Tossed out of his apartment, she heads back home to New Hampshire to get her head together. The implication that this will include a reduction in alcohol consumption falls by the wayside when she runs into her childhood friend Oscar (Jason Sudekis, whose strengths as an actor are getting worked out in ways that SNL never offered). Oscar owns a bar, and Gloria doesn’t so much fall back into her bad habits as move them to a less cosmopolitan setting, but hey. It’s always worked for her in the past.

A giant monster mysteriously appears in Seoul, South Korea, cutting a path of destruction before disappearing into the night air. No, I didn’t lose a block of text and segue into another movie there. What does this have to do with Gloria, Oscar and company? One might think only that such a horrifying event affects all mankind. But it turns out to be more specific than that.

And that’s all I’m going to tell you.

Colossal was written and directed by Nacho Vigalondo, whose previous films (Open Windows, Extraterrestrial) weren’t limited to the genre market in the US. This is his first shot at a mainstream release, and it’s entirely possible that it may be regarded as too weird for the multiplex regulars. I hope that’s not the case.

It’s also entirely possible that people like me, who have spent their lives watching far too many movies, may simply be reacting to novelty value. I’ve seen Colossal twice, once last year at TIFF and again recently, and it holds up. I’m not sure if the place the movie gets to in the end is worth the path it takes to get there, but there’s a lot to be said for taking the scenic route.

Also opening this week are two other films I saw at TIFF, though neither made as strong an impression on me (always a danger at a film festival that offers more good films that you can possibly take in). Graduation, for which the critically acclaimed Romanian director Cristian Mungiu was awarded Best Director at Cannes, was the first of his films I had seen. (The best known is 4 Months, 3 Weeks and 2 Days.) Those who have followed his work may be better prepared for this new drama and its slow, deliberate pace. Adrian Titieni  stars as a doctor whose respectable life falls into a morass of petty corruption after he tries to keep his daughter from losing a university scholarship after a violent attack makes it hard for her to complete her examinations. The basis for the Cannes award becomes gradually apparent as what seems to be a casually told story turns into a tight web of complications.

Their Finest is the kind of exercise in World War II nostalgia that British filmmakers will apparently never grow tired of making, as long as they can find a slightly new take on the era. In this case, we follow a young secretary (Gemma Arterton) in the Ministry of Information who gets promoted to a job writing dialogue for “informationals,” short optimistic propaganda films shown in theaters to captive audiences as they wait for the Hollywood feature to start. Her job is to provide dialogue for female characters, a job held in such esteem that her pay bump is zero and her output referred to generically as “slop.” But still, like the guy following the circus elephants with a shovel, she has a job in show biz. Bill Nighy co-stars as a washed-up actor who refuses to admit his career has declined, the kind of role he’s done so often that he can do it in his sleep and still be charming at it. That aside, I recall that it was moderately likeable but don’t really remember why; The distributor refused to provide screeners for its local opening, so that’s the best I can tell you.