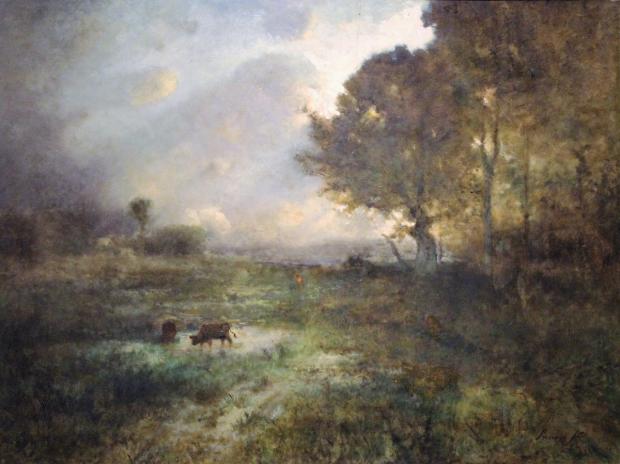 The Castellani Art Museum has a new exhibit that recounts the history of modern art in three chronological segments, in three large galleries.

Modern American art, mostly, but in the first segment, entitled Hudson River School to Postwar Modernism, with distinctly European, particularly French, overtones. The Hudson River School an American invention, but which the Europeans seemed to notice, and picked up on with own their invention, Impressionism, which the Americans picked up on in turn. Among the works on show, a George Inness pastoral idyllic scene, Albert Bierstadt’s luminist spectacular vision Red Mountain Peaks, and John Henry Twachtman’s somber placid Lake Landscape, France.

Several examples from around the end of 19th century, early 20th century, of Americans going to Europe to learn how to paint. The most interesting case in point that of Grant Wood, thought of as the quintessentially American artist, based on the possibly single best-known American painting, his American Gothic, done in 1930. Wood is represented here by an undated but surely earlier work—from a period when he was studying painting in France—of a gothic arch portal of a French church. The item explanatory label includes a small depiction of American Gothic, and notes that Wood once commented that he “had to go to France to appreciate Iowa.” An irony is that what we think of as particularly American about American Gothic is the moralist severity of the depicted Iowa farmer man and woman, in the way they strikingly resemble gothic religious art statues; we are less likely to consider that gothic art is specifically French art, a subcategory of French art.

Along the more or less logical progression path through post-impressionism and cubism—including a classic analytical cubist work by Picasso, a lithograph based on a 1911 painting, and a cubism and its discontents Georges Braque late work—some outlier pieces to the logical progression. An ominous full moon and clouds nocturnal scene by Albert Pinkham Ryder, and sunny New England play day in the snow scene by Grandma Moses.

Segment three is called Pop to Postmodernism. Lots of fun items, starting with a huge sculptural pictorial open book of a work by Robert Rauschenberg. Scores of reproduced images solvent transferred on fabric, alternating with plain or colored mirror vertical strips (so the viewer can be in the work as well). The transferred images ranging from the Shroud of Turin face of Jesus to O.J. Simpson scampering over fallen Chiefs defenders, to technical illustrations, to pages of stock market quotations. While across the room, a Lesley Dill sculptural chair composed of steel wool strands, work worthy of Charlotte the spider. And two Richard Pettibone satiric homage to Picasso works, including a bicycle seat and handlebars evocation of a slightly more Ferdinand-like bull than Picasso’s longhorn, and painting of a Greek vase in red and black, together with Picasso-style drawings of some Ancient Greek figures, two males admiring or evaluating a courtesan.

A Jasper Johns lithograph overlaying numbers 0 through 9; a Cindy Sherman large-scale photograph of some nondescript subject matter—but something unpleasant, it looks like, something possibly decaying, beset by huge shiny flies, the only subject matter we can more or less decipher, attracted to whatever it is we can’t quite. Also, a Niki de Saint Phalle ceramic sculpture of two joyous dancers not mistakable in terms of body type for members of the New York City Ballet or the Joffrey. Also, an Andy Warhol screenprint of flowers (a little reminiscent of the Joan Mitchell painting in the previous gallery), and photographic series on the Andy Warhol glamour world, featuring in one instance a black Rolls Royce, in another, superstar art and show people the likes of Keith Haring and Liza Minelli.

Education is unending. This excellent exhibit is up indefinitely.