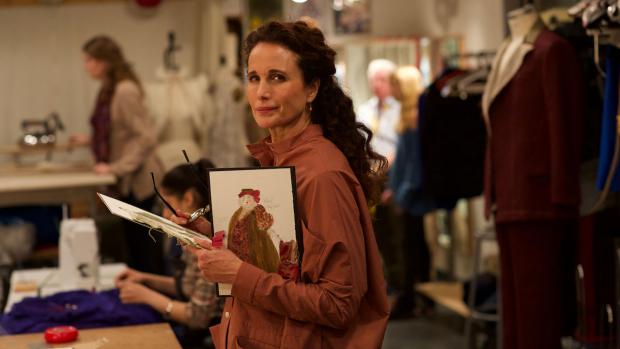 It was close to the halfway point of Love After Love that pressed “stop” on my DVD player and went back to the beginning. I also did something I don’t usually do when reviewing a film—I read the production notes, the background information provided by a film’s distributor for reviewers.

I don’t like to do that because I prefer to experience a movie as much as possible on its own terms, with no preconceptions or knowledge about what’s going to happen. But in this case it was necessary, as I’d gotten halfway through the movie with too many questions about what was going on to be able to continue.

The synopsis is pretty simple. After a middle-aged man dies unexpectedly, his two sons and widow have difficulty dealing with their grief. Suzanne (Andie MacDowell) tries to throw herself into her work, and begins a new relationship with a man who has lost his wife. Oldest son Nicholas (Chris O’Dowd) has trouble maintaining his own relationships, and is unable to cope with his mother’s attempts to move on. Younger son Chris (James Adomian) drinks a lot. (Well, to be fair they all do.)

Writer/director Russ Harbaugh based this on his own experiences after the death of his father. Love After Love expands on ideas used in Rolling on the Floor Laughing, his 2012 MFA thesis short for Columbia University’s film program.

Which is to say, an academic working out his personal issues in a movie. That’s worrying, but not necessarily fatal. The problem, for me at least, is that Harbaugh got it in his head that the best way to approach this material was by indirection, to show (but not openly address) the emotions at play underneath seemingly banal situations.

As his co-writer Eric Mendelsohn describes the process, “The idea that we worked from was chaos and events. Rather than the way that traditional stories are told, we would create whirlwinds of events where behavior will inform the audience where they are in the story, instead of dialogue.”

Nice idea, but you still have to make sure that your audience is getting the basic information. It shouldn’t take so long to work out that Suzanne is Chris’s mother rather than his sister or friend. If you’re going to lurch forward in time, you need to make that understood (unless you’re trying to disorient the viewer.) You need to visually establish the performers who aren’t recognizable stars like MacDowell and O’Dowd so that we have a sense of them within the story: I didn’t realize that Nicholas was cheating on his girlfriend with another woman until I rewatched it.

Maybe the most damaging factor is that Harbaugh does nothing to establish that the paterfamilias, first seen in reasonably good health at a family gathering, is such an emotional touchstone to his wife and sons. Without that, it’s hard to connect to the difficulties they have in moving on. This may have been clear to Harbaugh because he’s making a film about the death of his own father, but most of us in the audience didn’t know the guy.

Full disclosure: Love After Love has a rating of 84 percent from metacritic.com and 95 percent on Rotten Tomatoes, so don’t just take my word for it. (But I’ll bet all those critics read the production notes in advance.)  It opens Friday at the Eastern Hills Mall Cinema.

BRIEFLY: I Feel Pretty is the apparent result of someone advising Amy Schumer to tone down her edginess in order to win a wider audience. The result looks like something that could have been made in 1952 with Judy Holliday. Super Troopers 2, a sequel to the 2001 comedy, has no deep meaning or political agenda, and contains Canadian caricatures so broad they make Bob and Doug MacKenzie look like Laurence Olivier and Ralph Richardson. It doesn’t have too many big laughs, but I chuckled pretty consistently from beginning to end.